The tale of two photographs

I want to take you back in time for a moment. I want to go back to 2019. Let’s stay here in Kelowna and let’s walk past Mike and Cody at the door, walk in to the old Doc Willoughby’s, before the pandemic.

Can you see it? The low, dim light that only an old local like Doc Willoughby’s could give to our memories.

I had arrived early for the Cancer Bats show. The fellas were setting up. I saw one of them and he looked oddly familiar. I leaned against the bar as Colin handed me a beer. I nodded to a stout, well tattooed, bearded man wearing a tugboat sailors toque.

“Who are these guys? This one here in particular; the guy uncoiling the cord?” Colin looked to the guitarist by the stage. “You don’t recognize him?”

My head tilted a little. “He does look oddly familiar.”

Colin stood up and explained to me how Wade McNeil, lead guitarist of Canada’s Alexisonfire was touring with the Cancer Bats, stepping in on lead guitar. “No way,” I said, suddenly star struck.

I have been a devout fan of the band for a long time. The powerful guitar prowess of McNeil has always gained my respect. And here he was, just a few feet in front of me. I walked over. I introduced myself. I told him I was a fan and would be taking photos of the show for the evening. He shook my hand. We made polite conversation and I then let him be so he could get back to getting ready for the show.

Well. When the Cancer Bats take the stage their presence is undeniable. I had never seen a crowd at Doc Willoughby’s THAT insane before. In fact, as the show went on, they started up a cover of Sabotage by the Beastie Boys. I had been fighting for position to take my photos all night.

Being an event photographer sometimes you have to fight to get the right shot. As the song sent everyone into a furious frenzy, I snuck behind a tower of speakers so I could photograph the drummer. As I was doing so, all of a sudden, the song reached its crescendo and ‘BOOM’ the crowd shifted and smashed into those speakers. They fell on top of me and as I hit the floor, my legs buckled under me and I felt an ominous, ‘pop’ in my right knee.

Staff and attendees pulled the speakers off and helped me get up. I took stock of my knee. There was a hot, pumping sensation inside my leg. Within minutes I was limping badly. I packed up my camera gear and said goodbye. I was done for the night.

When I came home, my knee had ballooned up to the size of a softball. When I reviewed my photos from the evening, I was delighted to see that at least I came away with a great set of images. One in particular of Wade McNeil.

I had held my camera up and did my best to angle it while fighting the surging push of the crowd. I had hoped some would come out nice. Sometimes you never know until you come back home and review them.

My knee was in trouble though and the worst part about it was that I was scheduled to go on a rock climbing trip to Northern Mexico in a few days time. I suddenly wondered if the price for these photos was worth it or not.

When I arrived in Mexico my knee was feeling better, but it was still tender.

El Potrero Chico is far away from the beach. It’s located in the North. El Toro is a jagged mountain that scrapes against the sky. The hostel and my home for the next few weeks is El Rancho Sendero. It resides at the hem of the mountain’s dress.

When I arrived the place was empty. No climbers. No staff. No one was there.

Valentine, the son of Mario and Mary, the owners of the estate, had picked me up in Monterey and informed me I had arrived in its slow season. I walked out to the mountains alone and took in the open sky and the rolling hills. As I walked through an archway that says, El Potrero Chico, I soon came across a spire that looked like two horns. I wasn’t sure if I would be able to climb at that level but if I could, I wanted to stand on top of one of those horns.

The following day, my friend Fred joined me and we had the whole place to ourselves. I started out slow, climbing easier grades than I would if I hadn’t been injured in a mosh pit. And it went well. I was hopeful. Fred and I climbed the sharp limestone cliffs. Pockets for our fingers and big holds for my feet, I slowly gained confidence that I had lucked out and I would be able to climb at a more advanced level soon.

As a week went by, I met climbers from all over the world. The season was still hot for climbing, but I love climbing in the sun. The smell of the cliffs. The sizzle of the heat on my shoulders as we methodically climb up to the anchors is a strange addiction but an addiction all the same. One day, a new friend from Squamish led Fred and I up over a thousand feet to the peak of one of the mountain ranges. Everything was going so well. 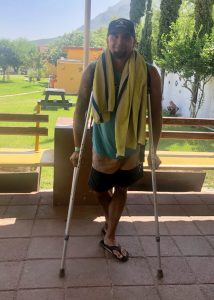 On day eight, Fred and I approached a steep trail that led to the base of a series of vertical cliffs in what’s known as Virgin Canyon. I felt it was time to try something more difficult. Selem is a 39 metre climb that is at an intermediate level of climbing.

I remember it so clearly. I took off from the ground. Sharp incuts were well chalked and I could creep my way up cracks and pockets. I was cruising. I was about ¾ of the way up when I hopped to the left for a deep pocket and ‘POP’, my knee buckled and I fell maybe 20 feet before the rope caught me. I slammed into the wall. There was that hot, flood of blood feeling in my leg again. Fred lowered me down. I had tears in my eyes.

“Dude, I heard that from down here,” he said.

I was maybe 100 feet off the ground when it happened and I had to be helped down the steep, jagged path, dodging cacti and scree as we slowly made it down to the main road. A couple locals drove me to the hostel.

The swelling returned. I iced my knee and kept it elevated and knocked back anti inflammatories. My climbing was over for the trip. I knew it.

After a quick medical assessment I discovered I hadn’t damaged my ACL, which was my initial concern but had done something to the meniscus in my right knee. I was told to rest, elevate and ice for the remainder of my trip. For me, I had come all that way to climb. Not sit by the pool. But, I was left with no choice.

The sun was hot and I had befriended a puppy I named Tocino, which is Spanish for Bacon. I named her that after she stole bacon from my plate when I wasn’t looking.

I had a hard time sitting by myself for days. I was on crutches. An icepack was always wrapped against my knee. So, I found ways to occupy my time. I wrote poetry. I drew a bear on one of the walls of the hostel. I spent time with Mario and his family. We cooked together.

One day I was offered a healthy dose of cannabis by a local climber who said it would help with the pain and the boredom. He was right. It did help and, on my last day before I left to return to the Okanagan, I woke up with a bit of strength in my knee.

Fred and a few others were heading out to those spiers I had come across when I first arrived. I figured, ‘if I can’t climb, maybe I can at least photograph my friends climbing.’ So, I wrapped my knee up nice and tight, found a good walking stick and with Tocino by my side we slowly made our way up into the mountains to find a good vantage point so I could take some photos.

I found a trail and hobbled my way up. I came across scorpions and tarantulas on my way, but they left me alone and once I was high enough I took out my camera, lit up a spliff, sipped cool water and watched the group of climbers take turns climbing up the spires. Tim, who was from Germany, was the first to climb to the top of the right horn of the spire.

The light in the canyon was incredible. With a telephoto lens, I was able to be hundreds of feet from them yet photograph his ascent with delicate precision.

I spent hours up there, snapping photos and afterwards, I joined everyone for a Mexican fiesta at the ranch. Lamb was slowly roasted over the coals. Many people came for the dinner and I was ready to return, yet I was heartbroken that I had been so foolish to push my limits the way I did.

I would also have to say goodbye to everyone I met, including Tocino. I still think of her to this very day.

Now that COVID-19 regulations seem to be easing, and with my knee fully recovered, I hope to return to El Potrero Chico and visit Mario, Mary and Valentine back at El Rancho Sendero and hopefully get back to the climb that blew out my knee, climb those spires and with any luck, meet up with Tocino again.

I share this story because if I didn’t injure myself I never would have captured two of the best photographs I’ve ever taken.

Wade McNeil’s photo was taken on a night before COVID-19 was a part of anyone’s vocabulary. We didn’t think of social distancing or any of that crap. Doc Whillouby’s was different back then. Everything has now changed and when I look at that photo it reminds me of those days.

And in Mexico, I learned to sit with myself, deal with an injury, connect with people and a puppy and to make the most of what I have.

In the end, things change, our bodies break down, our time can be limited in our pursuits so I share my stories in hopes that you too, dear reader, cherish those close to you and to make the most of the time you have, while it’s here.