Home GO! - Lifestyles The Okanagan Lifestyle, Part 1: Does it live up to the hype? 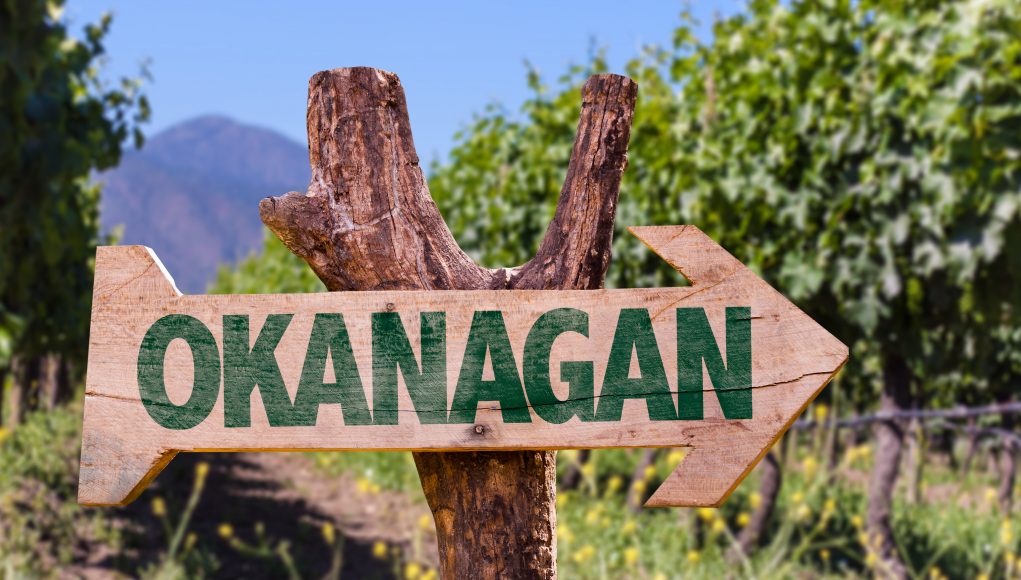 Does the ‘Okanagan Lifestyle’ live up to the hype?Spoiler Alert: YES, it does!

The Okanagan, part of British Columbia’s Interior Plateau, spans roughly 250 kilometres end-to-end, and is marked by some of the province’s most beautiful glacier-carved lakes. The region has many small, yet charming towns and cities: Kelowna, Kamloops, Salmon Arm, Vernon, Lake Country, Lumby, Peachland, Summerland, Penticton, Naramata, Oliver, and Osoyoos.

It’s common knowledge that Kelowna, the economic beating heart of the Okanagan, and its largest city (pop: >140,000), has some of the best weather in the country. All four seasons are (mostly) distinct, yet it’s not as chilly or humid as other parts of our big, beautiful country. This could be attributed to the fact that it’s in a valley, and the abundance of lakes act as temperature regulators, especially in the winter.

Speaking of warm, let’s talk about the epic Okanagan summers… they’re typically hot and dry, even parched at times, making it a high-risk area for forest fires. Hence, the Okanagan actually has a fire season, with some years being worse than others. Ok, that’s strike number one, but I promise you, the “strikes” are few and far between! 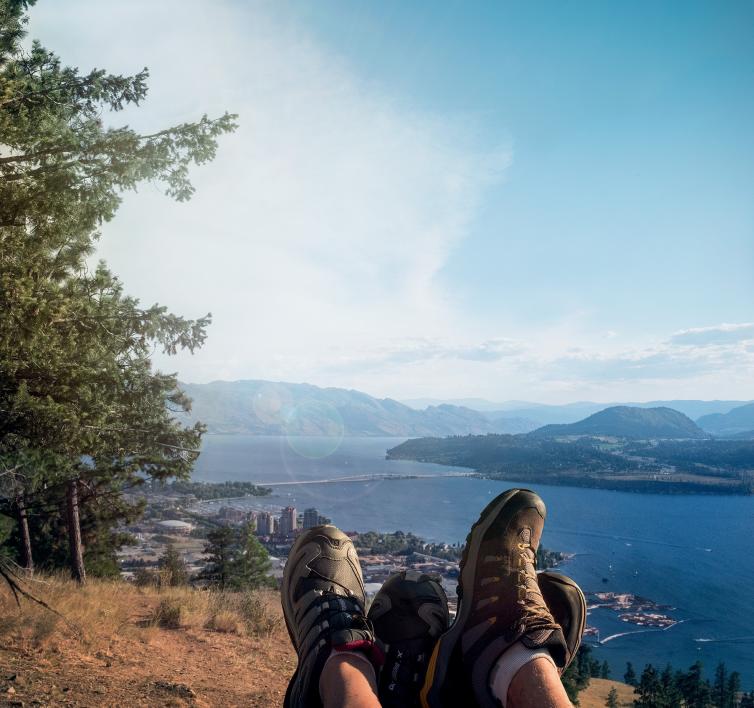 So, besides the warm weather and cool geography… let’s talk about the actual lifestyle part of the Okanagan Lifestyle!

This region isn’t just wildly popular with tourists. (No, seriously, they can get pretty wild.)

Besides visiting or residing in a photographer’s dream location that’s rich with amenities and culture, you’ll know you’re fully immersed in the Okanagan lifestyle when you’ve embraced your inner adventure seeker. With all the lakes & rivers, forests & natural green spaces, there are endless exploration opportunities, and to experience something new and different with each one. 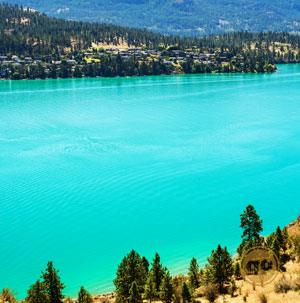 Did you know that due to the lime deposits (calcium carbonate), Kalamalka Lake, just south of Vernon, always turns a turquoise blue in the summer months, reminiscent of the Caribbean. It’s one of the world’s few marl lakes, and just happens to be my favourite spot in the whole world… ahh, lake life.

That said, having been a Kelowna resident for the past 10 years, I feel like living the #OkanaganLife actually embodies a certain state of mind. One where you feel a sense of belonging to a larger community – which is very different from my 20+ years living in Vancouver!

Ok, now that you’re getting a better picture of what the Okanagan lifestyle is all about, let me highlight how YOU can sip in every delicious drop of it.

Health care, technology, agriculture… and tourism account for the bulk of the economy in the Okanagan. That’s why living in Kelowna and surrounding areas, in the summer months, can make it feel like you’re on a never-ending vacation. This is due to the throngs of tourists that populate the beaches, golf courses, wineries, and eclectic cuisine scene – restaurants, gastropubs, patios, and farmer’s markets – that this region has become famous for.

For example, the lakes of the Okanagan serve up a bucket list-full of water-based amenities, from beach lounging, swimming and paddling, to boating and wakeboarding, with every variation or combination of those activities. Get after it!

The expansive region is host to a variety of fruit orchards, including hundreds of vineyards, boasting well over 200 wineries. The first one to be established – Calona Vineyard, dates back to 1932. The Okanagan, also known as the “Wine Capital of BC” will have you meandering along the winding roads of the Naramata Bench, cruising up Bottleneck Drive in Summerland, and trekking the Westside Wine Trail in West Kelowna leading to one of the area’s most awe-inspiring views atop Mission Hill – and far beyond. You could say that this is a veritable (varietal?) wine-soaked paradise. Have you done a sip trip lately? 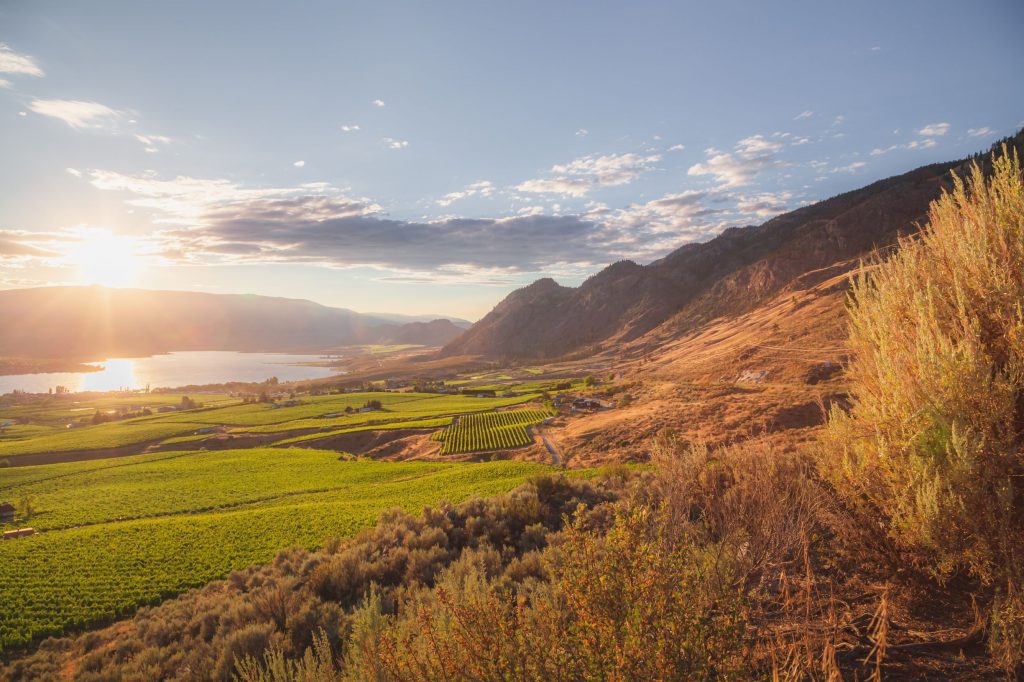 Did you know that the Okanagan Valley, with its unique and varied climate, is warmer and more arid than California’s Napa Valley, and gets nearly two hours more sunlight per day during the peak growing season? Cool.

The Okanagan doesn’t just showcase its award-winning wineries; it is fast-becoming known for its micro breweries and cideries, too. What can I say? We like our tasty homegrown beverages!

But, no matter what floats your boat or fills your cup – whether you’re all about the outdoor adventures or the local music, entertainment & culture scene – there are plenty of amenities to meet everyone’s tastes – especially the food and sips!

But, is the Okanagan Lifestyle really that brag-worthy?

While there are a few downsides, such as: an overall higher cost of living (we’re currently in a huge real estate boom), the risk of flooding every spring, and a distinct fire season, as well as additional traffic congestion in the peak of tourist season… I think those of us who live here or who frequently visit here, are still proud card-carrying members of the Okanagan Lifestyle Brag Club!

But, just to offset that traffic congestion “strike” for living in and around Kelowna… did you know that Kelowna’s Bike Lane Network features nearly 300 kms of on-street bicycle lanes and an extra 40 kms of separated paved multi-use paths? More are being added and it’s expanding all the time.

From the spectacular views and locales to the cornucopia of amenities, there’s no end to what #OkanaganLife has to offer, particularly for those who have yet to visit or who might be moving here from outside the Interior. It was certainly the best move that my family made over a decade ago!

Besides, you wouldn’t want to miss the opportunity to catch a glimpse of Okanagan Lake’s most famous, maybe even real, resident: Ogopogo.

All kidding aside, and like I mentioned, it really is a state of mind, and you do need to carve out your own version of the Okanagan lifestyle.

Plus, the summers and sh*t load of outdoor activities really are EPIC. But, perhaps I mentioned that already?