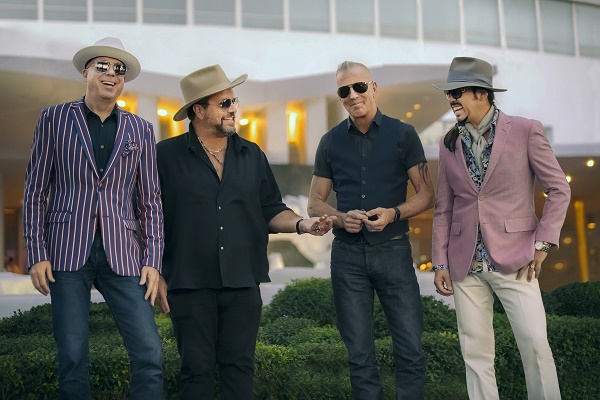 THE MAVERICKS
WITH GUESTS

Sometimes all you need for things to come right is a little time.

The Mavericks – masters of country-Latin rock’n’roll, born in the rich cultural mix of Miami then tempered in Nashville’s country hothouse – rode high in the country and rock charts of the 1990s with culture-crossing hits like ‘What A Crying Shame’ and ‘All You Ever Do Is Bring Me Down’. Then they conquered Europe with the titanic feel-good party classic ‘Dance The Night Away’, a 400,000-seller in the UK. Yet nothing lasts forever, and in 2004 The Mavericks went on hiatus while frontman Raul Malo explored new musical avenues.

But since a reunion in 2012, this most singular of bands has re- established itself as one of the most exciting and joyfully entertaining acts on touring and festival circuit across the planet. It’s a reputation based on their irrepressible mix of country, Tex-Mex, rockabilly and Latino sounds plus a riotously entertaining, world-renowned live show. A Mavericks gig is a guaranteed party night encompassing everything from the essential ‘Dance The Night Away’ to the infectious Tejano-ska hybrid of ‘Back In Your Arms Again’ – and, on occasion, even wild cards like a Mavericks take on The Beatles ‘Back In The USSR’.

The Mavericks are true American originals, heirs to the great songwriting traditions of Cuba and Miami, of Nashville and San Antonio and Memphis. Now, on their 30th anniversary as a band, they’re back to remind the world why they’re so good.

“Being away from the band felt like being in a kung fu movie where you go into the mountains on a mystical path to gain special wisdom,” laughs singer, guitarist, key songwriter and founder Mavericks member Raul Malo. “We needed that time away, and a big dose of humility too. It was good for us. That humility and that understanding of each other is what informs the band now. I think it makes us by far the best incarnation of this band yet.”

The Mavericks’ rise in the 90s was meteoric. Within a year of forming in 1989 they had signed to MCA Nashville and in 1992 they released their major label debut ‘From Hell To Paradise’. There were hits on the radio and in the Billboard charts and, from 1994 to 1996, a string of Country Music Awards. Album number three ‘What A Crying Shame’ went US Platinum in 1994 and the following year they won a Grammy for their single ‘Here Comes The Rain’. And if the USA cooled a little on The Mavericks by the time of their fifth album ‘Trampoline’, 1998’s departure in style for the band, the rest of the world opened up to the classic ‘Dance The Night Away’ – a bona fide worldwide smash which remains a party standard to this day.

Now thirty years in, The Mavericks are doing it their own way – and enjoying it. “Musically it’s way more interesting now and I love that the fans will go with us wherever we’re going,” says Raul. “We have a great canvas that we can use at will, and that’s the ultimate reward for an artist. There’s nothing more satisfying.”

“And the best thing is,” adds soft-spoken keyboard player Jerry Dale McFadden, “we’ve stayed true to the name of the band. I don’t know if these guys knew, when they chose the name just how maverick The Mavericks would turn out to be. But we are.

“I loved the past with The Mavericks,” says Jerry Dale, who joined The Mavericks in 1994 and stayed through the highs and lows. “But we’re a better band now than we were then. No question.”