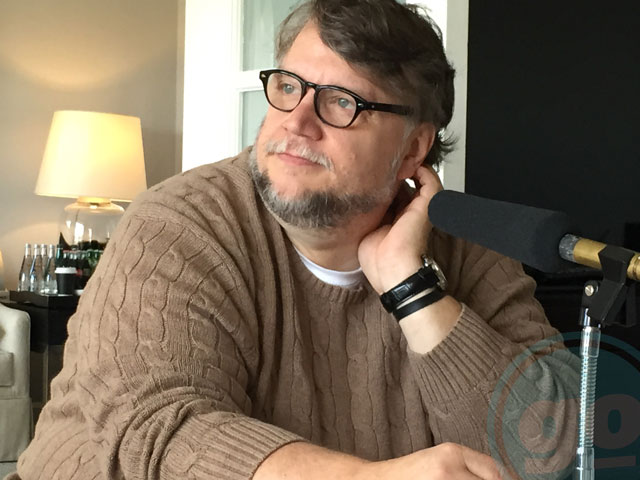 Every Christmas should come with a new Guillermo del Toro creation. Well it takes him longer than a year to make them, but we’ve got one this year. The Shape of Water is del Toro’s 1962 set Cold War fantasy. Eliza (Sally Hawkins), a mute cleaning lady, befriends an amphibian man (Doug Jones) in the lab where she works. When she helps him escape, they have an intimate romance, with vicious interrogator Strickland (Michael Shannon) desperately on the hunt.

Gonzo got the chance to participate in a roundtable interview with del Toro in Los Angeles. It’s easy to just sit and listen to a master storyteller talk, but we chimed in with a few questions of our own too. The Shape of Water is in select cities December 1 and everywhere Dec. 8.

G: Have you been building to a film like this where the creature can be a romantic character

GDT: Not so much that. In a strange way, the 25 years I’ve been working as a film director did lead to this movie in many other ways. The level of freedom, the fact that I’m finally salient as a filmmaker. I just feel very comfortable and I can go from thriller to musical to drama to comedy in the same movie. The way I work with actors and thematically what I talk about is what I feel as an adult. All those things, yes. I have had leading man monsters in the past. Hellboy, which took three years to make that makeup, exactly as this makeup took three years to make, because they were leading men. You had to sculpt it. When people say, “Oh, it’s Ron Perlman painted red.” No, every inch of Ron Perlman is covered in foam latex except his upper eyelids. The rest is not real. His teeth are not real, his eyes are not real. Everything is artificial. I think it’s a great compliment because Hellboy looks very much alive. This character again took three years to design and execute because we were creating not only a leading man and a star, but we were creating primordial, elemental god from the water. We needed to proportion it and make the mineral, the sculpture and the painter already be part of the acting.

Q: You have enormous compassion for the outsider.

GDT: And an enormous belly.

Q: Is your love for monsters a way of coping with some sort of self-loathing?

GDT: Of course. Of course it is. Telling stories is a form of coping with loathing. What you do is the choice is the balance between living life and talking about it. That’s a storyteller’s life. Now, when I was a kid, very young, I told more stories than I lived. Then, as a teenager, I lived more than told stories. At different points of my adult life, the balance is one side or another. You have to live to tell stories. You have to be a participant in the world to tell stories about it but it is the balance.

Q: Has the theme of demonizing “the other,” people who don’t look like us, the disabled, people with different sexuality, been informed by the way Mexico has been demonized by the current President?

GDT: Yes, but it’s been going before. Let me put it this way, some people say what we are experiences, this started way before. That’s why the movie is ’62 also. The thing is not only specific to one problem. It’s specific to the fact that ideology has permeated our lives to the point where we can demonize a person with one word. Nobody is one thing. Nobody is just one thing but if you can name one person one thing that you can hate through ideology, then you can beat that person, you can make that person mute, invisible, arrest, deport, anything, vilify. But if you get to spend time with that person and understand that person, you’ll see that we are all polychrome. The danger right now is that social discourse is black or white. The only place we can be human, really human, and breathe, the only place with oxygen is gray. If we don’t understand that, we are headed for disaster. We really are. That’s why I wanted to make the movie, because I feel that the way we look at “the other,” which is embodied by the creature, tells us who we are. If we choose to not fear it but love it as different, look at the creature. Strickland looks at the creature as a filthy thing that came from South America. The Russian scientist sees the same creature as a miracle of nature. Giles sees this creature as a God that is going to give him hair. Eliza sees this creature as the missing piece of the puzzle of who she is. She didn’t want a prince. I show in the beginning of the movie that she has a pretty nice life. She has a really good friend. She has a life that is not a huge life but she’s happy with it, but when she sees him and he sees her, they recognize essentially that they belong together.

Q: Are you also using the red and black image of fascism in your movies?

GDT: I think that any extreme authority, the scariest thing for me is groups of men, groups of people that are certain. That’s the scariest thing. When certainty and blindness go very much hand in hand. You cannot convince someone that has a dogma. That’s very scary for me. When people, whether it’s burning people at the stake for witchcraft or persecuting people for a belief or an origin is very difficult. This has been something that Rousseau was pondering, the philosophers of yore have been pondering all of human existence: is man good? I think that we are. I think that we are. I think what happens is ideology does get in the way because it is the perfect form of control. There are two possibilities. Your life is difficult because A, 1% of the population owns 90% of the wealth which means you’ve got to do something about it, or B, them. Whoever they are. Race, religion, that exculpates you. It’s not you, it’s them. Let’s go kill them. Let’s go jail them. Let’s deport them and we’ll be all fine. It’s much more tempting to go with B, because you feel vindicated. Hatred is a really strong emotion. It’s really strong, but so is love.

G: Isn’t C the possibility that I’m responsible for my own problems, and no one wants to accept that?

GDT: Yeah, but that is part of in order not to have them, you have to have I. A, includes that. A, you say, “Okay, that’s what’s going on in the world. Now, what am I going to do.” It’s like when we talk about any big problem right now and we have someone to demonize, they say, “What are you doing in your immediate circle?” What can you do in your immediate circle? I agree with you. C is what are you doing about it? The thing with the movie, if you’re cynical, the movie’s simple. If you’re not, the movie’s complex. Why? Because if I tell you I’m 53 and I’ve come to the conclusion that love doesn’t exist, you go, “What a sophisticated thinker?” If I go, “I’m 53 and I’ve come to the conclusion that love is the solution to everything” you go, “Oh, Guillermo, please.” But I do believe that. I do believe it in many, many forms. I’m not a Teletubby. I don’t mean that we’re going to go throw flowers everywhere and kissing everybody. It’s not that. It’s about choosing between fear and love, or understanding. If we try to understand, we try to love. That’s why most people that hate don’t understand the things they hate.

Q: Has your vision been shaped by your childhood in Mexico?

GDT: Yes, yes, yes, 100%. If you see the movie, the marriage of the extraordinary and the ordinary is completely Mexican. The fact that there is a river god, but he can be in the bathtub. The fact that they can make physical love and then talk about it the next day as if they were having a coffee with a friend. So it’s the ordinary, the everyday and the extraordinary because I think in Mexico, if you’re having Dinner and you say, “The ghost of my grandmother came to me last night,” You go, “Really? Tell me more.” You don’t go, “No, no.” You go, “My uncle came the other day.” Most of the people I know in Mexico have had extraordinary experiences with ghosts or apparitions and we discuss it in a very natural way. I myself have had my share of weird stuff happen and I’m a skeptic, but I’ve had stuff happen to me.

GDT: I saw a UFO at age 16 for sure. I wish it was a great tale. I would tell you it was a great design. It was so crappy. It was a flying saucer with lights and circles. If I was lying I would make a better design but it was just like they show it on TV. A friend and I were on a highway and we saw a light on the horizon moving super fast. I said, “Honk and flash your lights.” The thing went from there to 1000 meters away in less than a second. It was exactly as they do it in the movies. I tell you, if I was lying I would go, “It was not like that.” No, it was exactly like that. We got scared, jumped in the car, ran away, very scared. It followed us for a few seconds and then I looked back and it was gone.

Q: Did you tell anybody?

Q: Did they believe you?

GDT: Yes, because I think most everybody in my family has seen a flying saucer.

Q: What about a ghost?

Q: But your father won the lottery, bought a modernist mansion and was kidnapped.

GDT: No, no, he’s had an interesting life. He’s just not artistically inclined.

Q: How did it change you to buy his freedom?

GDT: Well, it was a very changing experience. I think my relationship my dad is much more human now. I see him as a man, not as MY DAD.You go from being a son to being a man saving a man.

Q: Have you seen Coco?

Q: Some journalists say it’s inauthentic. What is the importance of representation and seeing those images in mass culture?

GDT: I think it’s extremely important that anybody that wants to tell a story, from any nationality, can tell it. Bertolucci didn’t have to be Chinese to do The Last Emperor. I think when we self-marginalize ourselves saying you can only tell this story. We tell stories about everyone. Telling stories should not be an act of immigration or passport or geography. You have Kubrick interested in telling the story of Napoleon and Kubrick is not French. You have Louis Malle interested in telling a movie like Atlantic City and he’s not American. What are we going to do? I think the fact that anyone is interested in telling a story around Mexico is great. More stories should be told about Mexico.