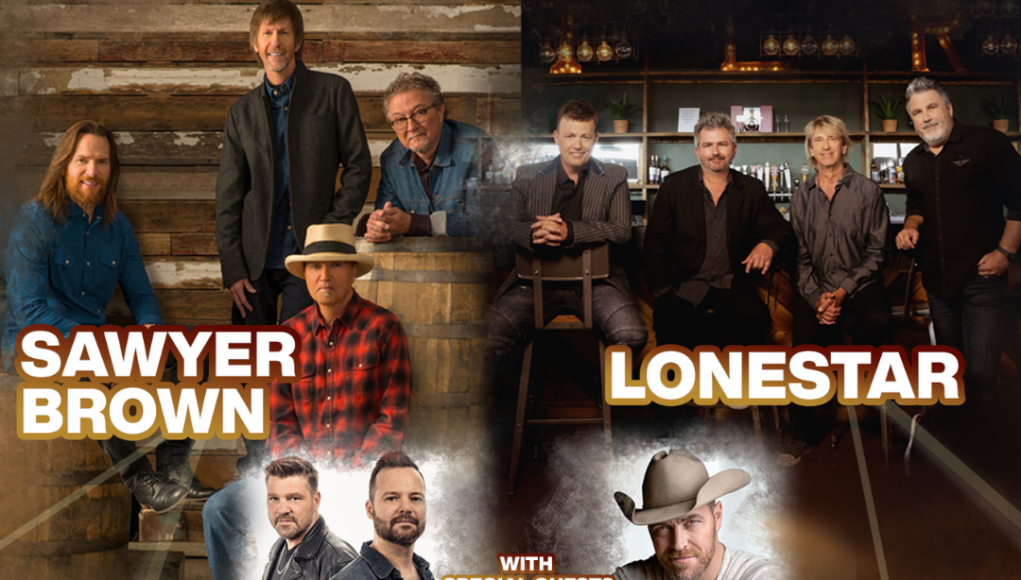 Tickets can be purchased in person at the Valley First Box Office (at the SOEC)or online at www.ValleyFirstTix.com.

Two of country music’s most iconic performers, Sawyer Brown and Lonestar, have announced they will be performing shows this Fall in Canada, including a date in Penticton at the South Okanagan Events Centre (SOEC) on Thursday, November 17, 2022 presented by New Country 100.7. Canadian country superstars, Doc Walker and George Canyon will join as special guests.

Fans will not want to miss this show of timeless hit after hit. Tickets for this legendary line-up go on sale Friday, June 24 at 10:00M PST.

Sawyer Brown: Sawyer Brown has been performing for four decades. The band’s live shows are legendary. Having been described as “the Rolling Stones of Country Music,” the band bounds onto the stage night after night, delivering its own unique brand of high-energy entertainment. And since 1981, the band has released 18 studio albums with over 50 charting singles and three number one hits. Sawyer Brown’s hits, including “Step That Step,” “The Walk,” “Thank God for You,” “The Boys and Me,” as well as the band’s anthem: “Some Girls Do.”

Lonestar: Lonestar first charted on Hot Country Songs in late 1995. Nine of the band’s singles reached number 1 on this chart: “No News”, “Come Cryin’ to Me”, “Amazed”, “Smile”, “What About Now”, “Tell Her”, “I’m Already There”, “My Front Porch Looking In”, and “Mr. Mom”, with nine more reaching Top 10 on the same chart. “Amazed” also charted at number 1 on the Billboard Hot 100, becoming the first country song to do so since “Islands in the Stream” in 1983. Both “Amazed” and “My Front Porch Looking In” were the top country songs of 1999 and 2003, respectively, on Billboard Year-End. Three of their albums have been certified platinum or higher by the Recording Industry Association of America. Additionally, they were the 2001 CMA Vocal Group of the Year.

George Canyon: Canyon rose to become one of Canada’s hottest Country Music stars in the early 2000’s and has won countless accolades and awards, including Juno Awards, CCMA Awards, and ECMA Awards to name a few. He has been inducted into the Nova Scotia Country Music Hall of Fame, recorded 12 albums, and was presented a certified Platinum Award for his debut album “One Good Friend”. With country hits like “Just Like You”, “I Believe in Angels”, “Drinkin’ Thinkin’”, “Daughters of the Sun”, “I Got This”, “I Want You To Live”, “Slow Dance” and many more, he is also a highly regarded humanitarian, strong supporter of the military, and, most important, a proud father and devoted husband.

Doc Walker: With over 20 Top 10 singles in total, Doc Walker are one of the most recognized Canadian country acts of the past few decades. The group released 8 Number 1 CMT videos with millions of streams, won 12 CCMA Awards including Fan’s Choice, Group of the Year, Single of the Year  (42 nominations to date) and earned a 2009 JUNO Award for Country Album of the Year (7 nominations to date). This year, Doc Walker are celebrating the 20th anniversary of their iconic hit “Rocket Girl” and look forward to sharing this milestone with fans while on the road this fall.