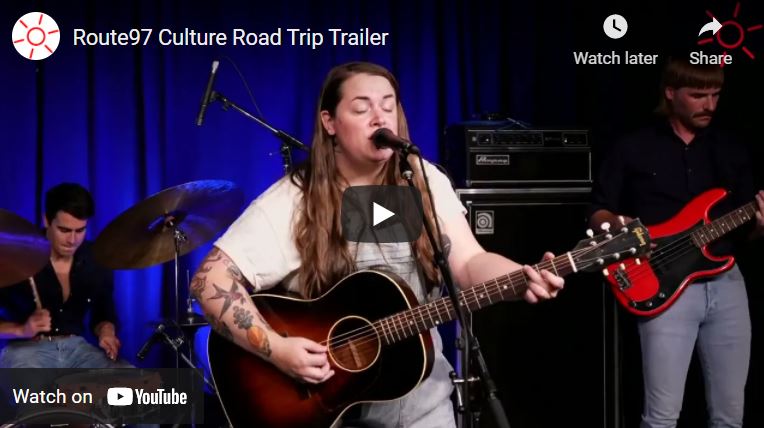 Highlighting live music in the BC Interior, and featuring a myriad of up-and-coming Canadian artists – the first episode features the critically acclaimed musician/producer Louise Burns performing at The Covert Farms Family Estate in Oliver, BC.

Kicking off this Feb. 21, and continuing every Monday up until March 28, 2022 – the new series showcases six artists performing thirty minute concerts that take place at six unique venues along the Route 97 Highway in the British Columbia Interior.

The artists and venues featured in the Route 97 Culture Road Trip series include:

Episode 1 – Monday February 21, 2022 – The series starts with Louise Burns performing at Covert Farms Family Estate, Oliver. Accompanied by her musicians Nik Pesut and Darcy Hancock – this first episode also introduces us to the owners of Covert Farms (Gene and Shelly Covert) and their magnificent 650 acre regenerative organic farm and winery. Also featured in this episode are Gene and Shelly Covert, the current owners of Covert Farms Family Estate.

Episode 2 – Monday, February 28, 2022 – Rebecca Lappa and The Revelry performing at Truck 59 Cider House, West Kelowna. Appearing in this episode is Jason Parkes Head Scoundrel at Jason Parkes Customs  who sits down in the Crown and Thieves Speakeasy for a chat with Rebecca. This project has been made possible in part by the Government of Canada and FACTOR.

A force within the Canadian music industry, Louise got her start in 1997 when she was a founding  member of the band Lillix. Signing to Maverick Records (the Madonna owned label), Lillix went on to sell more than a half million copies of their debut album “Falling Uphill” – and since then, she’s crafted the most incredible solo career.  From producing acclaimed artists (FIONN, Jody Glenham, Haley Blais, Rebecca Lappa), to being a host at CBC Radio 3, to her own storied musical journey where she’s garnered a SOCAN Songwriting Prize nomination, being longlisted for a Polaris Prize, and forming Gold & Youth – she’s released three albums, and is set to release her fourth next year with the help of producer Jason Corbett (ACTORS).Since the start of 2021, Route 97 Culture has been on a mission to engage with a number of business owners and cultural organizations regionally, to present artists in new venue settings. The goal? To open up the market and create new touring infrastructure for diverse, emerging, and established artists – and, as we move along Highway 97 we encounter five more incredible artists performing in stunningly beautiful venues. A full list of the programming is below.