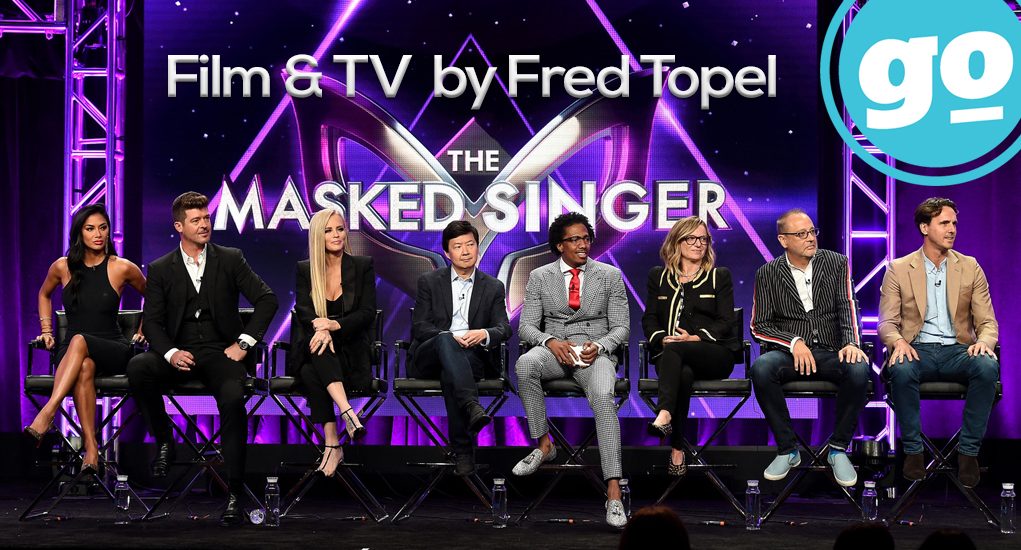 Robin Thicke had a surprise for the Television Critics Association and Gonzo was there to see it. The musician is joining Jenny McCarthy, Ken Jeong and Nicole Sherzinger as a judge on a new Fox music competition, The Masked Singer. Celebrities wearing costumes will sing and the judges have to figure out who’s under there.

We won’t see the show until January but Thicke was there to talk with reporters this summer. Before The Masked Singer premieres in January on Fox in the U.S., Thicke has some new music on the way, plus a new family member, his infant daughter.

Gonzo: Have you wanted to do one of these music competition shows for a while?

Robin Thicke: Well, I did Duets years ago on ABC. We were more involved because we sang on every episode, we mentored, we picked the songs. For me, it was much more fun to just come to work and watch entertainment, and then try to figure out who it was. It’s the easiest job I’ve ever had and one of the most fun.

Gonzo: How does The Masked Singer impact your recording and touring schedule?

Robin Thicke: It doesn’t actually. We shot it all within about a month and I’m able to take care of my family and make my shows and do anything in between.

Gonzo: Did you ever have fears about going on stage?

Robin Thicke: Definitely. I started out as a studio musician, as a songwriter producer so I was writing and producing music in the studio for about 10 years before I ever performed live. So it was definitely nerve wracking and it took me 10 years of performing to get completely comfortable.

Gonzo: So you can understand where the contestants are coming from?

Gonzo: What costume would you pick if you went on The Masked Singer?

Robin Thicke: I would probably go Killer Whale. My father passed a couple years ago and I finally kind of realized how much I’m comfortable in my own skin just being myself. If I’m going to go on television, as long as I get to be myself, I don’t have to criticize or hurt people’s feelings because I’m not comfortable with that. I was just there to encourage them. Imagine every Tuesday and Thursday night doing a Vegas show and getting to enjoy the show, and then try and figure out who it is behind the mask. That’s kind of what it was for me. It was just fun entertainment.

Gonzo: Would we ever see you on a different season of the show?

Robin Thicke: Well, as these shows develop, who knows? I believe we’d all be open to things. I think what’s most important about this is the people themselves, the celebrities themselves are overcoming fears, taking chances and trying to re-energize their careers. Some of them have had incredible careers and they’re looking to re-energize.

Gonzo: With a new baby and an eight-year-old son, what’s your advice for working dads?

Robin Thicke: Actually, right now I just started doing all the nights so I’m not sleeping much. I found when my first son was born, I was on tour a lot. My ex was filming movies so we were back and forth and I would miss two weeks at a time with him. So right now, being able to be with my daughter every day and be there and hold her and see every little first step she makes has been amazing.

Gonzo: Are you working on any new music?

Robin Thicke: I am actually. I have two new songs coming out in October so this is all lining up nicely for me.

Gonzo: What new things do you want to try with those songs and in the future?

Gonzo: What is inspiring your new music?

Robin Thicke: Oh, so many things. My father passing, I’ve been through a divorce, I have a new baby. There’s a lot of things. Enough has transpired.

Gonzo: Is it easier to write now?

Robin Thicke: Actually, I think when you’ve done it this long, when you’re starting out you have this kind of blind confidence and you don’t know if you’re not good enough. Then once you know a lot, some of it becomes mathematical and you say I gotta get out of that. I have to let it just be feeling again. So I’ve gone through a few different stages since my last album where one, I was trying to chase something. Then one I was just writing without intention. And then about a year ago I started writing stuff I was really excited about.

Gonzo: I there a Dad song?

Robin Thicke: There is a Dad song.

Gonzo: When you have a song that was as successful as Blurred Lines, do you have to factor that into your new music?

Robin Thicke: Well, actually that’s what I was saying. I started with that. After you have a Blurred Lines, you want that feeling, you want that thing again. But that’s not realistic because when we made Blurred Lines, we were just trying to make a good record, not a hit song. So I got out of that headspace and now I’m just back into making music I want to hear. Then you hope that translates.

Gonzo: What would be totally out of your comfort zone?

Robin Thicke: Oh, I don’t know, maybe wearing the costume. That might be too much for me. I’m claustrophobic in general. So I don’t know the deer could’ve handled that.

Gonzo: If you picked a song outside your genre, what other genre would you sing?

Robin Thicke: Country. Country music would be something I’m not as familiar with but the base of country music is soul and rock n’ roll. So you can take a great country song and turn it into soul music the same way you can take a great soul song and put a country twang on it. Some people stayed in their line. There might have been an older artist who tried to sing young songs and some younger artists sang older songs.

Gonzo: You don’t have to say who, but were you star struck when any of the performers were revealed?

Robin Thicke: I was. There was one especially.

Gonzo: Do you fanboy over people?

Robin Thicke: Well, I’ve never been a celebrity fan as much as I am an artistic fan. Like if I see Quentin Tarantino, I’ll get excited. I love artists. I love writers, I love creators so I don’t fanboy over that as much, but there was one person, hands down.

Gonzo: Did anyone on the show sing your music?

Robin Thicke: No, only the audience would sometimes, when the guys are hosting, they go, “Who’s got a song? Who wants to sing a cappella?” So sometimes people get up and sing some of our songs.

Gonzo: How many bad karaoke versions of your own songs have you heard?

Robin Thicke: Oh, it never gets old though. Once you get a little older, where I’m at now, you just start to appreciate everything that you have instead of worrying about what you don’t.