Home GO! Sports Jace Minni came up huge when it mattered most 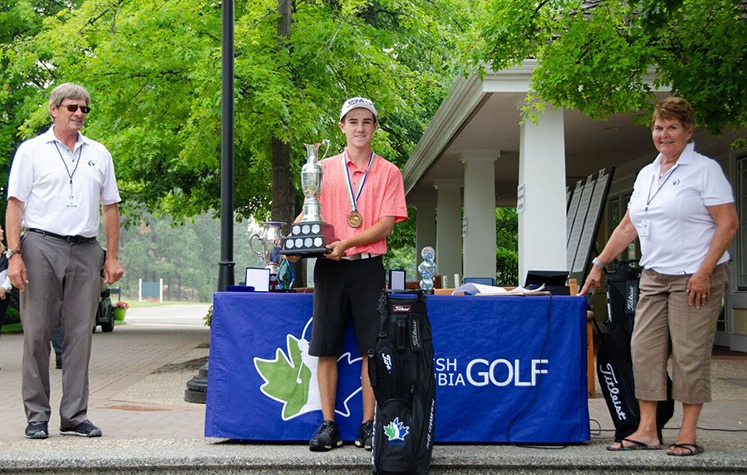 The 2018 BC Juvenile Championship came down to the wire on Thursday, August 23, 2018. This year’s host course was the challenging Gallagher’s Canyon Golf Club (par 72). It featured the best 76 golfers in British Columbia aged 16 and younger.

Vernon born and raised Ryan Vest, carried the lead into the final round after shooting rounds of 72 and 69 at only 12 years old. This left Delta’s Jace Minni (16 years old) 1 shot back after rounds of 72 and 70. Minni grabbed an early lead after bogeys on the 1st and 2nd holes by Vest. The junior from Vernon shook the nerves and found his game with birdies on the 8th and 9th to get back to a tie for the lead heading onto the back nine.

They went back and fourth all the way down the stretch. Minni birdied 10 to steal the lead, but a bogey on the tough par 5-12th put them back together on top of the leaderboard. It appeared Vest had taken hold on the tournament when he confidently dropped a 15-foot birdie putt on the short 15th hole.

After a pair of pars by the duo on the 16th, they headed to the difficult par 4-17th with Vest one up. Unfortunately for Vest, his putter let him down. A 3-putt bogey from Vest and a solid par from Minni put them head to head, tied, going into the final hole of the tournament.

After their tee shots Vest once again appeared to have the upper hand. His ball ended up in the middle of the fairway and Minni found himself in the fairway bunker. Minni caught an unlucky break catching the lip of the bunker on his approach shot, Vest missed right on his second shot as his ball trickled into a green side bunker. Both would go on to bogey the hole and find themselves in a playoff to decide the Championship.

Both hit quality tee and approach shots and were on the short grass with putts for birdie. Minni from 20 feet and Vest from 10.

With a look of pure, intense focus on his face, Minni walked up and drained his putt, dead center cup and finished it off with a Tiger-esk fist pump.

The pressure shifted right back to Vest who knew he needed to make his putt to continue the playoff. He was faced with a challenging 10-foot slider from left to right which he pulled and missed on the high side. And like that Minni had won.

“I knew going into the playoff if I put [my ball] in the fairway I would have a really good chance of making birdie. After I hit my shot behind the hole I was a little scared but ended up making the putt… it was just pure excitement, just screaming in my head practically. The fist pump really showed it off.”

Although Jace Minni ultimately is the Champion of this tournament, both played to a level that no others could match. They combination of skill, focus, and determination they showed for golfers of their age is truly remarkable.

The tournament also featured some of the Okanagan’s best up and coming golfers. Kaeden Miles (25th), Kyle Mayner (T-19th) and Matt Hopley (18th) placed well although the trio were all hoping for better finishes individually.

One thing they all have in common is their love for the game and the appreciation of the effort that the BCGA puts in to hold tournaments every year.

“I love the atmosphere out here. We really get treated like [professionals]. To younger golfers I recommend starting out with the Zones” Mayner said. In the Okanagan, the BCGA hold the Zone 2 Junior Golf Tour every spring. It’s a great way for kids to get experienced playing in tournaments.

When Hopley was asked how younger kids should get involved in golf the answer to him was clear, “BCGA, everyone is super nice. It’s a great opportunity and so many memories, 99% of junior golfers are great people. It’s rare you’ll find anyone you dislike. Out here, it’s about more than just golf”

Miles agreed with his close friend Hopley, “Play, just play tournaments. No matter how scared you are or how skilled you are. I couldn’t think of any other way to spend my last years as a teenager. You meet so many new friends. It’s unreal”