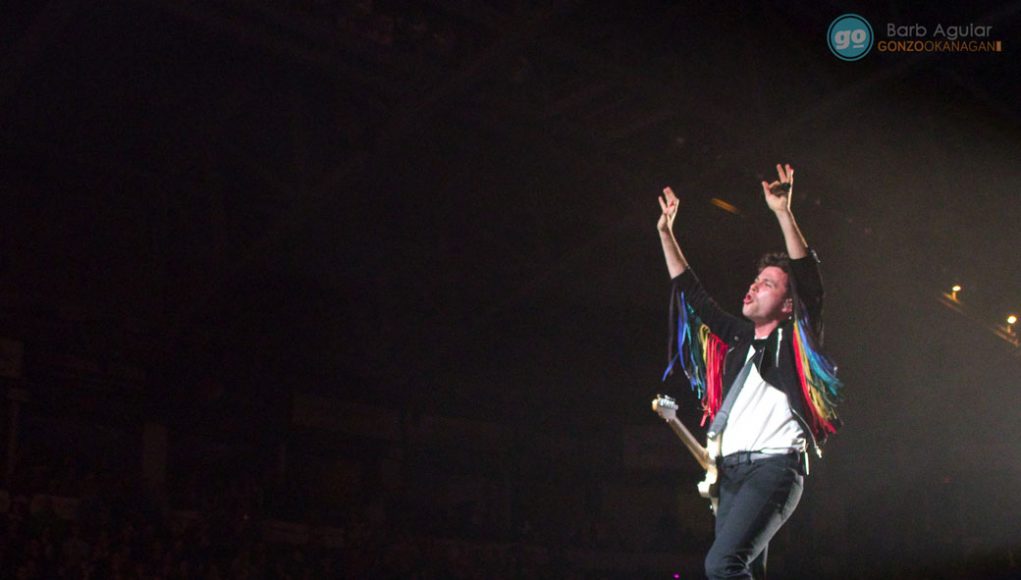 The Arkells, named after Arkell Street in Hamilton where they practiced their music, made their first Kelowna appearance years ago at Doc Willoughby’s. Tuesday night the rock band, out of Hamilton, electrified Prospera Place with their high-energy performance.

From the moment the band took to the stage with Relentless from their latest album Rally Cry, it was apparent this would be a party.

Lead singer Max Kerman was in perpetual motion throughout the two-hour 22-song set, dancing, skipping and bounding around the stage and up and down the runway that extended into the audience.

The rainbow fringe on his black motorcycle jacket flowed behind him as he moved.

Kerman established four rules for an Arkells concert early on: sing, dance, look after one another and everybody agree it’s Saturday night.

The band made up of Kerman, Mike DeAngelis, Nick Dika, Anthony Carone, Tim Oxford and Dan Griffin has won multiple Juno awards including Group of the Year and Rock Album of the Year for High Noon in 2015.

The have been nominated for a 2019 Group of the Year Juno.
The concert tour is in support of Rally Cry, the Arkells’ latest album released in October 2018, but the band played some of their older music as well, including No Champagne Socialist and Oh, the Boss is Coming from 2008’s Jackson Square as well as hits from High Noon, Michigan Left and Morning Report.
The band set up a Rally Cry Tour Request Line people could call into, tell which show they were attending, what deep cut they would like to hear and why.

The band used the end of the runway to highlight various members of the band, bringing out the Northern Soul Horns, Anthony Carone on a keytar and even Tim Oxford on a pared-down set of percussion during the evening.

Kerman loved to interact with the audience, urging them to sing and dance, even visiting fans in the bowl during Eyes on the Prize to issue doctor’s notes to members of the audience excusing them from work the next day.

While out in the audience he discovered a fan celebrating a birthday at the concert and led an impromptu singing of Happy Birthday.

At one point, Kerman noticed a fan in the audience wearing a similar black jacket with the rainbow fringe. He brought his doppelganger onto the stage where the pair danced together.
Near the end of the concert Kerman called out for a member of the audience to come up and play guitar. One lucky woman was handed a guitar to play on stage with the Arkells, and then body surfed her way across the floor during Hand Me Downs, the final song of the set.

The two-song encore saw Kerman return to the stage wearing a sequined jacket and included a cover of Abba’s Dancing Queen.
The evening finished off with My Heart’s Always Yours with the crowd invited to put their arms around their neighbours and sway side to side while the mirror balls projected sparkles of light throughout the arena.

Lord Huron, an indie folk band based in Los Angeles, opened for the Arkells performing catchy numbers such as Ancient Names and Fool For Love.

Way Out There featured a theremin, an electronic instrument controlled without physical touch, which delivered a haunting effect and wowed the audience.