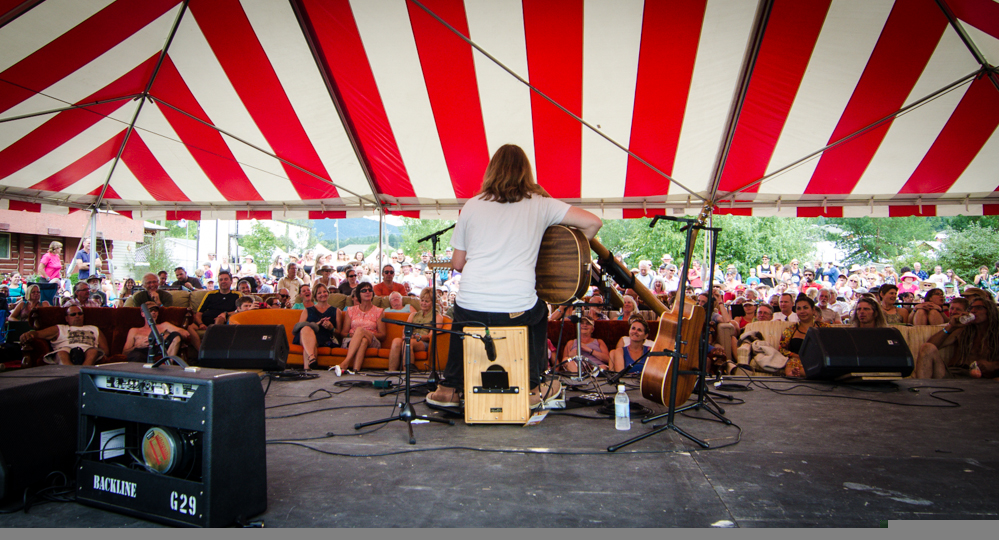 Three whole days! Four completely separate stages! Over 30 different performers and guests! All this and a cubic butt-load more made this year’s Salmon Arm Roots & Blues Festival one not to be missed. Celebrating its 21st year in operation, the festival is more than just some downbeat music and a lot of pretty lights. Artists come from around the globe to perform, with some making their first appearances in Canada. Finish beatboxers, medieval German bagpipers (who double as an energetic club band) and a dozen groups from right here in British Columbia, culture, sound, and energy was practically oozing from Salmon Arm from August 16th to 18th.One of the performers I was able to sit down and chat with during my time there was Victoria, Australia’s resident longhaired one-man band Richard Perso. Only 22 years old, he sports 2 full albums and over 100 festivals under his belt, and shows no signs of putting the brakes on his career any time soon. His kick pedal, his tambourine, his numerous guitars, and all three of the didgeridoos he brings on stage make him instantly stand out, and even with absolutely no accompaniment, his shows are a sight to behold. Hayden MacDonald: Good morning!Richard Perso: Goooood morning.HM: Mind if we get straight into it?RP: Yeah, not at all.HM: Cool. So you mainly do one man shows?RP: Yeah, solo. I play guitar, and didgeridoo, which is an Australian instrument. I sing! And I do a bit of percussion with my feet. Just to sorta fill out that entire spectrum. Yeah, it’s a lot of sound for one guy, I suppose.HM: And no backing?RP: No, not really. I mean I’ve done a couple of albums where I’ve got bands in to do a bit of percussion and bass and strings and keys, but touring this extensively, I suppose as I do, you know, it’s hard to get musicians who are…who’s schedule can sort of match mine. And finding people who are focused enough too, so I’ve been solo since I started when I was 16, bout six years ago.HM: What made you wanna start at 16? What made you go “I’m a one-man band”?RP: I just started playing little shows, open mics and stuff and never really got into gigging with other people. Yeah, always been solo. Eventually I think I’d like to work in a band situation, but at the moment things are workin’ out for me. Just keep goin’.HM: Definitely, workin’ out very well. Touring for six years or just performing for six?RP: Yeah, both really. I was 16 so I was still in school, really limited how much time I could spend away. But I left school when I was 17 and just started gigging a lot more since then, and it’s just been festival season after festival season. Getting’ more and more gigs every year, just keeping very busy.HM: When was the first time you came to Canada for our festival season?RP: Wow…first time I came to Canada was in 2010. I just did a couple of small shows, I wasn’t here for that long. And then I was back over for the Folk Alliance in Toronto in February, and then I arrived in Canada for this tour on the first of July. So yeah, three times in three years.HM: Do you go anywhere else other than Australia and Canada?RP: No, not so much. Canada’s been my first big oversees tour and it’s been great fun, and I think next year there’s potential to do another Canadian tour. Eventually I’d like to look at Europe, but the States, it’s a hard market to crack what with Visas and everything. So it’s…it’s a bit ridiculous at times so for now I think I’ll just focus on Canada and Europe and then go from there. HM: Not too bad, eh? Not really limiting yourself to anything.RP: That’s it, man, I mean Australia’s always been a really good base for me, cause our warmer months are, like I said, in September…it starts to cool off in April but you can go north where it stays warm all year and keep gigging. So it’s always been a really solid circuit for me. But it’s nice to sort of branch out a bit and go visit other countries and it’s very fresh when you’re playing in a new country because people haven’t seen you before! So even though you might be doin’ the same stuff you been doin’ for the past few years, it feels new. Because there’s new crowds and new places, different formats of events and the way things are programmed. It’s a lot of fun.HM: And you’re essentially touring all year.RP: Essentially, yeah, man. I mean, it’s…winter’s just coming to an end now in Australia, and it starts warming up around the beginning of September, and that’s when our festivals start up again. So I think I’ve only had about five weekends free so far this year, and we’re running out of year. So it’s busy all the time but it works well, it works well for me. I can’t stand, you know, being…NOT gigging for too long a period of time because I sort of lose myself. What am I…I feel like I should be doing something but I don’t know what it is, so it’s, it’s always music.HM: Yeah, you’re not one to be stagnant.RP: No, not really. I mean I live in a small town back in Australia and I’m usually home there during the week, which is great because it’s a really good community and we’re on a small property pretty out of town. It’s very quiet and I can sort of focus on writing and creating. I can usually drive to a gig within three or four hours of home, and sometimes I’ll go away for up to five weeks or so then come back again. So it works really well.HM: Do you have any major inspirations starting out? Anyone who made you go “I wanna do this because of them!”RP: I was really into AC/DC when I was about 14. And I really wanted an electric guitar and my parents were just like, “Naw, we don’t…it’s gonna end up under your bed like your karate uniform,” and all that kinda thing. So my mum struck a deal with me, she said, “Look, if you busk, I will match you dollar for dollar over this period of time, and if you make enough money you can buy an electric guitar. And, so I was busking at this festival back home, and my auntie and uncle came in and they chucked in $50 each. And I made, like, another 150 bucks on top so by the end of that weekend I had enough money to buy that guitar, and that kind of kicked it off. So yeah, it was AC/DC, Neil Young, James Taylor, there’s a lot of Australian guys back home. There’s a guy called Shane Nicholson, there’s a guy called Jeff Lang. I’m very into Led Zeppelin, hence the t-shirt, yeah. I mean, I tour so much and see so many different acts at different festivals, I’m always sorta doing a CD swap with another band and I’ll listen to them for ages, and it just sort of keeps refreshing itself. There’s always new musical influence coming out of…from one gig to the next. Which is cool.HM: So far, for your Canadian tour, which has been how long?RP: Seven weeks. HM: Seven weeks, what’s been your favourite moment? Across these…almost two months now.RP: Yeah, it’s been, it’s a hard question, because you sorta don’t want to leave people out but you don’t want to isolate certain things. I’ll say one thing on the whole, is just how…how welcoming and how accepting Canadians have been. Every gig at every festival has just been great. I played Ottawa Blues Festival and I thought, I was on first for the day, and it’s just in this big field and it’s hot, and I was on first. There was next to no one there, and I thought it was just gonna be empty. I was happy to play anyway, but then people just started flooding in and I had such a great response, and it was so much fun. So just Canadians on the whole are just a very accepting and welcoming people. And it’s been great driving across the country and seeing the Rockies, you know, seeing the wildlife and everything, the whole place has just been really, really, great.HM: Have you ever met anyone touring who, they knew you from the Internet or they knew you from any of your records?RP: There’s ben a few people who have sort of…like, a lot of people when they come up and buy the CD after a show, they’re like “Yeah, we looked through the program and we checked you out on YouTube and we wanted to come to your show,” and that’s, that’s really cool that people are sorta anticipating what’s gonna happen but they’re sorta proactive in their response. They wanna go and find out what they’re gonna like and they wanna go and see the show. Then when I do gigs with other musicians, like workshops, like we sorta come up and say hi and “Oh, man, I saw your stuff on YouTube!” And that’s really cool, it’s such a great tool, YouTube. People can see what you do, and they have a predetermined idea of what they’re gonna see at the show. And that’s, that’s great, you know. It can help build a crowd as well.HM: Not as many passive viewers anymore.RP: That’s it, man. I mean, there’s still a lot of fresh meat there, but it’s, it’s cool when people come along, and some people sort of know a few of the words to my own songs, and that’s been a really cool thing, you know. Especially on my first tour in Canada. It’s been amazing to see, really enjoyed it.HM: Is there anything you want to add? Anything you feel you want to say?RP: Well I’ll see you guys next time! I’ll be back for sure, you know, it’s been a lot of fun. I’ll be sure to come back and tour again, just keep building on what I’ve done in these seven weeks, and for the first tour it’s been incredible. You know, just some of the gigs I’ve landed, and the turnouts, and the CD sales, everything has just been great. So yeah, look up my stuff on YouTube and Facebook, and I’ll see you guys at a show sometime.(January 2013), both recorded in a little basement in Brooklyn, New York, and both exceptionally well received. He can be found all over YouTube and at his website, http://www.richardperso.com