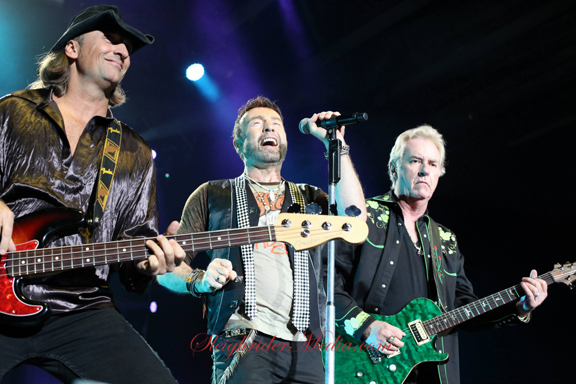 Back in 1973 the Moody Blues, the Byrds, Pink Floyd, Deep Purple, David Bowie, and Bob Marley were touring. It was during this time of explosive talent that two former Free members, Paul Rodgers and Simon Kirke, as well as Mick Ralphs from Mott the Hoople and Boz Burrell from King Crimson formed the super group – Bad Company. At the September 14 show at the SOEC that same power group took the stage with the exception of bassist Boz Burrell who died in 2006. Murray Atkinson (the Odds) and his drummer Pat Stewart warmed up the crowd with a surprisingly big sound, considering it was just the two of them onstage.

After a short break, Bad Company took centre stage. They wasted no time and started the show with “Rock ‘n’ Roll Fantasy” which brought everyone to their feet. Rodger’ still has it when it comes to being the voice of rock ‘n’ roll and it is obvious the entire band is having a blast on this tour. There was no chatting with the audience to fill time. In fact, there was no time to fill as the band blasted out song after song, much to the enjoyment of the crowd. “Live for the Music” and “Run with the Pack” set the pace and were followed by the classic Bad Company “Feel Like Makin’ Love.” Not one to let the audience or themselves take a breather, the band then pounded out flawless renditions of “Gone, Gone, Gone,” “Burnin’ Sky” and “Ready for Love.”

Now considering the band members have been together for 40 years, you would think at this point they’d be ready to slow down a bit – not so. Like most music lovers and musicians of this era, age is just a number and doesn’t slow them down one little bit. In fact, both the audience and the band were now nicely warmed up.

The crowd was treated to four more Bad Company classics with “Honey Child,” “Shooting Star,” (an obvious sing along favourite) “Movin’ On, and “Can’t get Enough.”

No one left their seats when the band left the stage. This group of Bad Company aficionados was obviously not going anywhere and clamoured for more. And rightly so, considering the band had yet to perform two of their most loved songs. Not ones to disappoint the fans, Bad Company took to the stage again and performed “Bad Company” and “Rock Steady.” At one point, it was hard to tell who was singing louder, the audience, or the band. The band departed once more, but the crowd did not, so they returned for one final encore with “Seagull.”

It was hard to believe this was a 2013 concert as the band played six songs from their 1974 album, Bad Company, and three songs from 1975’s Straight Shooter. Great song writing never goes out of style, and even though it’s almost four decades later, these tunes sounded as great as they did the first time around. Some may argue – even better.

All photos by Tom Kliner – Sleighridermedia.com

Click here for our interview with Paul Rodgers last year.

Here’s a bit of trivia from Alanah Bonjiovi courtesy of Facebook messages: The bass player they have now, is Todd Ronning. He grew up in North Burnaby, and is the brother of Cliff Ronning-former Canucks and NHL player. Todd played in Vancouver’s ’80’s music scene in a band called Headlines. This band was together for years. He moved to Nashville when Cliff got traded- and joined King Karma and enjoyed a couple of years success with them on a larger scale.