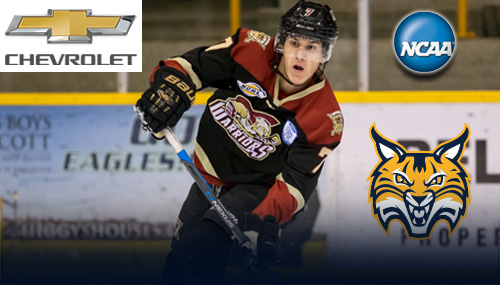 Wyatt Head keeps moving up. From minor hockey to major midget, to the BCHL and now division 1 NCAA.

The 19-year-old from Kelowna, B.C., has committed to playing for the Quinnipiac University Bobcats starting in the 2019-20 season.

“I talked to them at the BCHL Showcase [in September]. They introduced themselves and told me what their school was about… they followed up later in the season and I got to go down there and check out the school, I ended up committing”, Head said, “I was already pretty familiar because it was one of my favourite schools growing up”.

Head mention having the coaches trust his abilities this season has led to increased point production and the added attention of NCAA schools that comes as an addition to the stat increase. “My confidence has gone up quite a bit having the coaching staff believe in me. Playing on the powerplay, with the top guys on the ice, you got a good chance at putting up numbers, which helps attract colleges your way.”

Last year Head ended the season with 21 points in 58 games. This season he has been lighting it up, nearly matching his last year’s point total with 18 points in 21 games. He is currently sitting tied for 3rd in defenseman scoring in the BCHL. “This year’s been a lot different. Playing against the other team’s top lines and powerplay and penalty kill situations, you get the feel for being a guy that has to produce every night to give your team the best chance at winning.”

“It’s a big step in my development”, Head went on to say “It’s also been a dream of mine, ever since I was a kid, I’ve always wanted to play division 1 hockey. [Quinnipiac] was always my number one school so to be able to go there is just an added bonus. They’re a great program so I’m super excited”.

Although Head isn’t letting this season get away from him. He may have completed his induvial goal of committing, however his team’s goal of a National Championship is still in his sights “Every night I’m still going to play 200 feet and be the best player I can be…. Our aim in West Kelowna is to win a National Championship, and that’s what we’re focused on doing”.

Head will be joining a freshman class full of BCHL players including Austin Spiridakis of the Alberni Valley Bulldogs, Skyler Brind’Amour of the Chilliwack Chiefs, Matt Fawcett of the Powell River Kings, Corey Clifton of the Surrey Eagles, Tyler Ghirardosi of the Trail Smoke Eaters and PJ Fletcher of the Wenatchee Wild.
“With my dad playing junior hockey, he’s taught me how to act and how to be and that’s helped with my development. Obviously, my mom’s been a big part of it too. I put a lot of credit with my friends, some people might not, but having a good group of people that want to help you get better everyday, that’s been a big part of it aswell”.

Quinnipiac is revered as one of the top division 1 NCAA schools. The Bobcats have made it to the National Championship twice in recent history, 2013 and 2016, but ultimately fell short both times.