Meeting Ridley Scott, you couldn’t tell he’d just orchestrated a last minute re-shoot to finish a movie in under a month. He appears totally calm and unphased by the deadline of a December 22 worldwide release. Scott decided to replace Kevin Spacey in his movie All the Money in the World after allegations the actor sexually assaulted Anthony Rapp when he was 14. Recast with Christopher Plummer, Scott filmed new scenes over Thanksgiving.

Plummer plays J. Paul Getty, the oil magnate who refused to pay the ransom when his grandson was kidnapped in the ‘70s. Michelle Williams plays the boy’s mother. Gonzo attended a press conference with the chill Scott, Plummer and Williams to hear just how they accomplished this so fast! All the Money in the World, sans Spacey, opens December 22.

Q: What was the phone call about assuming this role? What did Ridley need from you in what time frame?

RS: We met in a terrible room in the Four Seasons in New York, this awful conference room. Oh, this is a Four Seasons. We met in this room and I wanted to keep away from the bar because I didn’t want to have a vodka martini having flown from London, to actually talk about the project.

CP: He flew all the way from London to see me. That was unbelievable. Even if I didn’t want to do it, I would’ve done it.

RS: Christopher said, “Sounds good, let me read it first.” He read it and the next day I think he said yes. You can do the usual blah blah what I said to Christopher, but he’s such a pro, he gets it and if I’m going to fly all that way to see Christopher, it’s going to be something serious. I think he took that on board and we never did have a drink, did we?

CP: We can have one now.

Q: Was it an instant yes?

CP: Yes, I honestly think I would’ve done it. For years, I’ve been wanting to work with Ridley. I’m not saying that so I can get another job. Really, seriously, because I admire his work tremendously. I would’ve probably done it for you even if I loathed the script. I must congratulate the writer. I really did rely on him because I didn’t have any preparation at all really. Ridley’s job seemed to be to make me as confident and as comfortable as possible, which he did miraculously, mostly because of his outrageous sense of humor. That will calm anybody down. David’s wonderful script, which I relied on thoroughly having made no pretension to the research. There were so many lovely colors in the character as written that I thought, “No, this is not just a monotonous monologue page after page. There’s an awful lot to evaluate.”

Q: How many days did you spend on this?

Q: Have you ever done anything like this before?

CP: In the theater, yes, but not on film.

Q: Was this unique situation a source of stress or did you thrive on it?

CP: You thrive. You thrive on it. First of all, if you love your profession, which Ridley obviously does and I certainly do, you welcome challenges and stress more than anything else. Why do we wait to play King Lear, for example? Because there’s nothing like it ever written before. It’s not because we think we’re going to be marvelous in it. Well, that’s a lie. But we’re going to feed ourselves with all the kind of hungry searching feelings that we have in this profession at all. I love the theater because I get a response from the audience. You certainly learn from the audience whether you’re good or not.

Q: What were the challenges of playing a woman fighting her father-in-law, going through the agony of her missing son?

MW: I think the way the script was conceived was of a woman who refuses to let herself fall apart, a woman who takes great effort to keep herself together because falling apart won’t get any closer to the ultimate goal which is to have her son back. That was, at times, one of the hardest things to do was to keep your wits about you, to stay as strong and as steely as possible when confronted with these circumstances that are so wrenching. That scene, going to a newspaper to look at the ear, they are these out of body experiences. As an actor and as this woman, to keep her intact was one of the biggest challenges, because falling apart isn’t going to get her anywhere. It’s not going to get her any closer to having her son back. I’d say that was one of my main goals.

Q: Did you have flashbacks with the paparazzi, comparing her experience in this crisis to your own in the media spotlight?

MW: I was totally devoted to Gail. I don’t feel like myself or think as myself. I had Gail’s struggle on my mind. It jarred me as Gail. It upset me as Gail. But again, was just another, she has to go through so much in this movie, so much that’s unfair, so much that’s undue, so much that just shouldn’t have been, and she’s doing it essentially alone. She and Chase form a kind of partnership or a kind of friendship at a certain point, but she’s essentially taking all of these hurdles by herself and has to really prove herself steely and worthy to be taken seriously. She is in a man’s world and unfortunately, to an extent, has to play like one of the boys in order to have any kind of authority in these really tough rooms.

G: All of you are very successful in a business that pays a lot of money, but you seem to balance that with healthy family lives. Did doing this movie give you any insight into what makes people like Getty have that disconnect to value money over their loved ones? 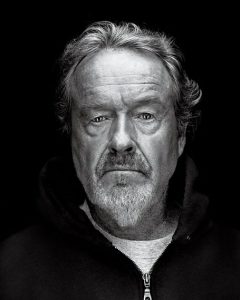 RS: I think your script says it. There’s a great scene with Getty with the gun, the gun cleaning scene which is where we get inside Getty’s soul and his disappointment and what he knows, professes what money can do. He’s seen it destroy men. It destroys families but most of all it destroys the children. You talk about the abyss of wealth, which in a similar way is the abyss of poverty. He says, “I’d much rather die in the back of a Rolls Royce than in some garbage can somewhere.” But when you’re approaching that point, it’s all the same. Whether it’s the Rolls Royce, you’re into such disarray and distortion that either one is a tragedy.

RS: Where’d that come from? Holy sh**. By the way, I used to work at an ammonia plant and lay runways. We employed more Irishmen every year. I did not come from a wealthy background. But I learned that way because my dad made me work. Every Sunday and we worked Christmas so I could have pocket money. He said, “It’s good for you.” He was right. All I learned from it, there’s no way I’m going to ever end up doing this job.

Q: Do either of you have more to add?

CP: I just hope to have a Rolls Royce meet me at home and take me to work.

Q: What do you love about telling stories?

RS: The unknown. Because I’m going forward into the unknown where I’m reading great material hopefully. Or, if it’s dodgy material, that’s even more stressful. You start off a film without a script, I’m sure everyone at this table has done the same thing. I’ve started off without a script. It was a page one rewrite on the first day. That is a nightmare and therefore if you can get good writers, get it on paper first. The hardest single thing to do is get it on paper. Once you’ve got it on paper, you literally have the blueprint, the emotional blueprint of what you’re about to do. That’s what you’ve got to turn into magic hopefully.

G: Which movie had a page one rewrite on day one?

RS: Most of them. You’d be amazed.