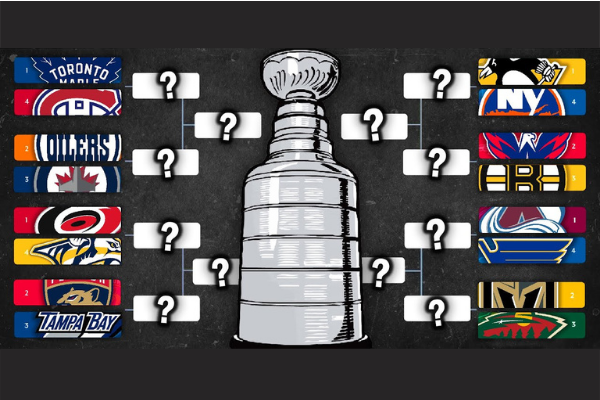 I remember (with joy) when my beloved Bruins won the Cup beating St. Louis on May 10  1970. There is no sport I enjoy more than hockey, however as puck crazy as I am watching hockey in July simply seems wrong.

Of course the arrival of the NHL playoffs also means the return of the equally absurd seasonal fridge-magnet game known as the HodgePodge Clip and Laugh NHL Playoff Predictions. Maintaining a silly tradition ridiculously repeated for some 30 years now – this amusing little game is simple to play. I foolishly predict the upcoming Stanley Cup Playoffs, you cut out this page, stick it on your fridge, and periodically laugh at my silly suggestions.

This season’s predictions are a little more difficult than normal since at the time of writing final team matchups were not certain. Regardless, the odds of my being completely wrong are dramatically high providing plenty of opportunity for rockus laughter by Clip and Laugh players. (I bet your having fun already).

Though I’ve watched far less games than hoped this season, it’s been an exciting and entertaining year – considering the inconsistency and chaos of the world the past three years. Players have adapted and emerged through all the adjustments to their lives and sports routines to provide a superb quality of play.

I’m actually making two predictions this year because, umm, I can.

The first prediction is short and simply what my heart desires. The Leafs will miraculously prevail in the Eastern Division battle and take on a Canadian based team from the Western Division. I’m cheering for an Edmonton – Toronto Cup final.

The odds are slim but what a great series for watching superstar players Connor McDavid versus Auston Mathews. Wow. Toss in the highlight skills of Match Marner, Leon Draisaitl … what fun. I’m enthused about the playoffs this year.

As a die-hard Leaf fan from childhood, who walked away for 30 years or so and then came back, my heart bleeds blue this time of year. The Leaf prediction is based on my belief that God is a hockey fan. More than that – a Leaf fan. The lack of Cup victories since the early 1960’s was merely punishment for the club allowing the evil Harold Ballard and the Smythe clan to take control of the team for so long. Now, however, it seems the club’s years of abandonment and suffering are over and players like Mathews and Marner are poised to play Moses returning the club out of the wasteland. God had better be a Leaf fan because it seems only a miracle will bring Toronto another cup.

Reality, however, says the Leafs rank around fourth in the Eastern Conference. The strongest teams in that conference are Florida, Carolina and Tampa Bay. My head predictions versus my heart dictates those three clubs and Toronto will be the top four emerging from the East.

In the Western Conference the top four will include Colorado, Edmonton, Calgary and Minnesota.

Sebastian Aho will win the MVP.

So there you are.

Grab your scissors and a magnet!

P.S. A real sporting sort will make their own predictions and post them on the fridge as well. Real brave folks will send a copy to me.