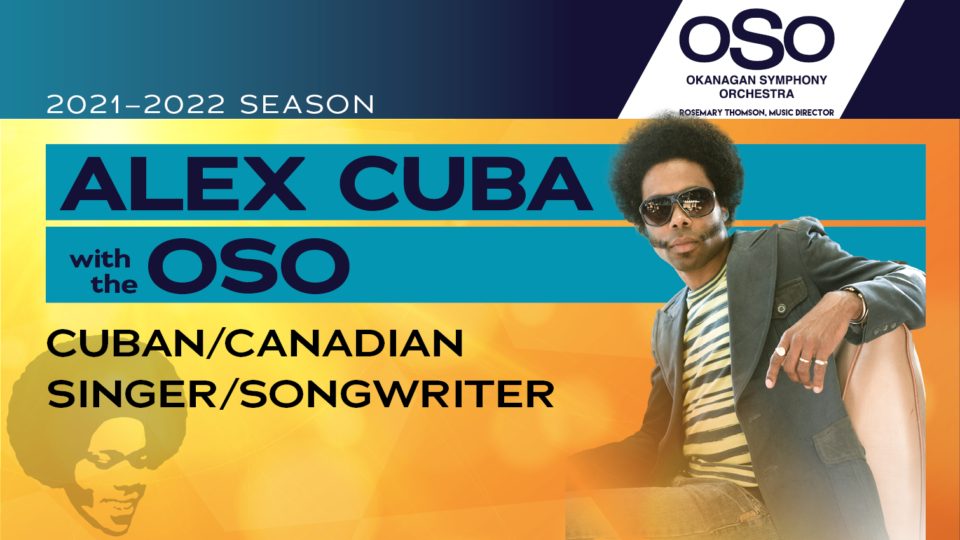 Whether you are new to Latin, Soul or World Music, or a seasoned fan of any of their numerous forms, you need to put the Okanagan Symphony’s upcoming concert with Cuban/Canadian singer/songwriter Alex Cuba on your calendar and purchase tickets before they’re gone. You’ll be glad you did! We are proud and excited to present ALEX CUBA & THE OSO, Friday, April 1 at the Kelowna Community Theatre and Saturday, April 2 at the Vernon & District Performing Arts Centre.

Tickets, and livestream access for Friday’s performance, are available through www.okanagansymphony.com/tickets.

Though raised in Artemisa, an hour outside of Havana, Alex Cuba’s artistry is as far-flung from his birthplace as the place he has settled and lived for almost twenty years — Smithers, BC, 14 hours north of Vancouver. His music incorporates his roots and is a unique amalgam of styles, a result of collaborations with a range of artists including Jason Mraz, Ron Sexsmith and Nelly Furtado, and assembling melodies, pop-soul hooks and rock chords in songs that may seem to bear little resemblance to traditional Cuban form.

OSO Music Director Rosemary Thomson is getting excited, too.

“Listening to Alex Cuba is like hearing warm sunshine after a cold winter. It is rare to find a performer who can demonstrate unbridled wizardry on the guitar while simultaneously delivering such velvety vocals. I simply cannot wait to perform with him.”

Lauded with multiple Juno Awards and Latin Grammys, Grammy nominations, and other recognitions, Alex Cuba carries his Cuba within, incorporating subtle jazz influences gained from his early years as a bass player in Cuba, and tasteful, sophisticated chords and lyrics expressing his poetry in an undeniably Cuban way. His growing body of work defines a unique musical place in the Latin diaspora.

Alex Cuba’s upcoming collaboration with a full symphony orchestra will provide music aficionados a performance in a class of its own. Always an ensemble that moves beyond stereotypes and traditional standards, the OSO has a long history of presenting artists and programs not typically associated with symphonic fare. We’re delighted to add this exciting and forward-thinking artist to that record.

OSO thanks Concert Sponsor, the UBCO Faculty of Creative and Critical Studies, and our Season Sponsor, Peak Cellars, for their generous support.