MOONBEAM PARADE Guilia Millanta (Ugly Cat Music) *****Here is (Julia’s) fifth album.  Moonbeam Parade is raw, powerful and beautiful, often all at the same time- some seriously deep stuff.“The best and scariest thing about Giulia Millanta is not just that she is truly a tightrope walker herself, but that she continually pulls you out there with her with melodies, singing, stories and imagery” says writer/ Sirius XM deejay Dave Marsh.  Some of Austin’s best musicians helped out- Charlie Sexton, along with members of Giant, The Dixie Chicks, Robert Palmer’s band, and more.  It’s a deep, sometimes dark record that looks at life in ways that may make you feel a bit uncomfortable.Millanta is playing electric guitar for the first time, and the disc has a loose, live feel. “All the tracks were recorded live with the band” she says, “(and) I ended up keeping all my vocal takes except one.”  She describes the songs as being about “getting lost and then finding a way out.  It’s about failure and re-birth, not being scared of strong emotions.”  If you’re into Lucinda Williams, you gotta check this out.

ELEMENTAL Ross Neilsen (independent) **** ½When I took the shrink wrap off of Neilsen’s sixth album, this is more than I expected.  My only previous encounter is 2010’s Redemption with his band “The Sufferin’ Bastards” so I was figuring on a blues experience- but this is much wider.After attending a Steve Earle songwriting workshop in 2014, Neilsen decided to take time off the road for the first time in forever, to write.  “I just wanted to write and record good songs and not be worried about what genre they fit in” he says. “I wanted to assemble a great band and serve these songs the best they deserved.”Ross assembled a great studio band including members of Monkeyjunk and Sheepdogs. So yeah there’s the blues, but so much more going on.  If you’re into Blue Rodeo Alabama Shakes or JJ Grey & Mofro, Elemental will sound familiar-ish.  He puts his influences on display and tells a biographical story of the last decade.  Blues-flavored yet wide ranging, this disc surely represents a breakthrough for Neilsen- I’ve already listened to it 5 times today, and I’m ready for more.

ESSENTIALS:  Elemental, Devil Made You, Step Into The Light

BLUES FULL CIRCLE Duke Robillard & His All-Star Combo (Stony Plain) *****If you feel like a big slap in the face of good old fashioned blues, Blues Full Circle is for you. The latest from this most prolific bluesman is a stone cold treat.Duke, a founder of Roomful Of Blues, is doing what he does best- play tasty blues guitar and inspire the musicians lucky enough to work with him.  As he says in the liner notes, “This album represents a full circle of blues for me.  8 of the tunes are new compositions, and 3 songs represent tunes I wrote 30 to 45 years ago. We hope you enjoy our back to basics approach to the music here- just straightforward, small band old school blues.”Joining Duke and his band in the studio are special guests like Jimmie Vaughan, Sugar Ray Norcia, Kelley Hunt, Gordon Beadle and Doug James.  They understand Robillard’s mission on Blues Full Circle and play their parts to perfection. The disc is impeccably produced by Duke (as always), and is a slice of blues goodness of the most delicious kind.

ESSENTIALS:  Blues For Eddie Jones, Lay A Little Lovin’ On Me, Mourning Dove

MAXWELL STREET Ronnie Earl & The Broadcasters (Stony Plain) *****+When I need some blues to open up my soul, if I’m not reaching for Buddy Guy it’s gotta be Ronnie Earl. Billed on the back cover as “an album of traditional, healing and soulful blues rooted in gratitude”, Maxwell Street is the most gorgeous blues record I’ve ever heard.If you want to know what pain and sorrow sound like, listen to Earl’s guitar playing here.  This disc features 6 original tracks alongside covers of songs by Otis Rush (Ronnie’s main influence), Gladys Knight and Eddy Arnold. As with most of his records this is mainly instrumental stuff, though Diane Blue lends her voice on occasion as required.Produced by Ronnie with Holger Petersen, Maxwell Street (named in honor of a late blues pianist and previous band member, and a nod to the famous Chicago Street) this disc sounds exquisite- from the laid back accompaniment to Earl’s guitar, which always brings me close to tears.  I get the feeling he’s a haunted man, it shows in his playing.  This is easily the best blues record of 2016.

ENCORE Barbra Streisand (Columbia) ** ½ Babs’ new album is all duets with various actors doing a pile show tunes.  How much you enjoy this disc will depend on how much you enjoy Broadway.  Obviously it’s kind of a ‘meh’ thing for me.It was after hearing Marvin Hamlisch and lyricist Carolyn Leigh singing a song from an unproduced musical they’d written, and speaking the characters’ dialogue that, in the liner notes, Barbra says “It made me think… why not make a duets album where the spoken word could be woven into the fabric of the arrangements, much like a real Broadway musical?”  And Encore was born.Some of Streisand’s vocal partners include Hugh Jackman, Alec Baldwin, Melissa McCarthy, Pine, Seth McFarlane and Jamie Foxx.  I’ve been a fan of hers since seeing Funny Girl in the theatre with my mom in 1968 and this album is impeccably produced (like anything she does), but not being keen on live plays is surely tempering my opinion of Encore.  I like this album, but only in a casual ‘let’s just be friends’ way- sorry, Babs. 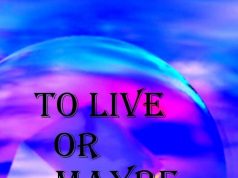 Book Review: TO LIVE OR MAYBE NOT by Gary Revel – John Kereiff