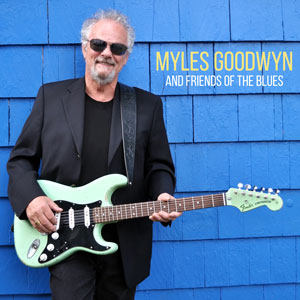 Been waiting on this one since first hearing about it a couple of years or so ago.  Myles Goodwyn & Friends Of The Blues is, I think, the April Wine front man’s second solo set and as blues records go,  I’m lovin’ it.

Like most rock bands April Wine’s music has always been informed by the blues, with their last studio disc, 2006’s Roughly Speaking, being their most overtly ‘blues’ outing- so this is hardly a surprise.   In his 2016 autobiography Just Between You And Me (a great read, by the way), Myles makes mention of Friends of The Blues being a work in progress… now it’s playing on my stereo!

In the last chapter of the book, Myles said at that time he’d be finished with this album ‘in a few weeks’.  “I managed to write a collection of quality blues songs after all” he comments, “and I was fortunate that the blues guys I contacted about contributing their talents to the project were on board.  A partial list of players on the CD are David Wilcox, Amos Garrett, Jack de Keyzer, Rick Derringer, Kenny “Blues Boss” Wayne, Frank Marino and Garrett Mason.”  That’s an impressive list, and it says something about Goodwyn that he can pull guys like that in.

Lots of different blues styles on Friends, from rockers like Hate To See You Walk Away and the brawny Last Time I’ll Ever Sing The Blues, to dramatic slow stuff like Willow Tree Blues. Some great playing too from Myles and his friends, including excellent slide work and some goose bump-raising solos.  I only wish I had the album packaging too so I could see exactly who did what.  I was genuinely excited to read last year that this disc was coming, and overjoyed to find out first-hand that Myles Goodwyn & Friends Of The Blues is as good as I dared hoped it would be. 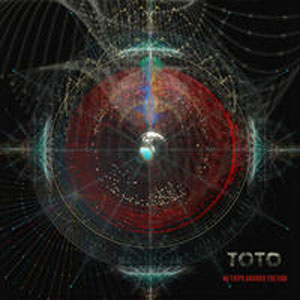 Hard to believe these guys have been around 4 decades, as the title suggests.  40 Trips is a wealth of great, well-played songs; 14 tracks from Toto’s catalog, re-mastered, along with 3 previously unreleased tracks… not bad for a bunch of studio guys.

Aside from their success as a band, the guys are well respected session musicians too. They can be heard on an astonishing 5,000 albums (including Burton Cummings’ My Own Way To Rock and Messin’ With The Boys by Cherie & Marie Currie) that can account for a sales history of half a billion albums.  Left to their own devices as a band,  Toto is a combination of rock and pop with jazz quality musicianship, true talent and playing ability that puts them head and shoulders above so many others.

The hits on this disc like 99 and Africa are sure to bring back a flood of memories for you, and the re-mastered sound is incredible.  As a Toto fan, if you already have the hits in your collection then the 3 ‘new’ tracks are the draw.  Spanish Sea, the first single, says guitarist Steve Lukather, “is originally from the Isolation sessions.  It’s one that didn’t make it and we had to re-write it including a new chorus. Thanks to modern tech we were able to play once again not only with our 20-something selves, but with our dear brothers Jeff and Mike Porcaro (r.i.p.), reminding us how deep their groove was.  Bittersweet.”

“Alone is a brand new song” Lukather continues.  “We wanted to start with an ‘up’ song in terms of groove for the album. The lyric is darker but we are older guys now and have lived life.”  The 3rd new track on 40 Trips is Struck By Lightning.  “I had the opening riff in my head for months” says keyboardist David Paiche.  “Joe and the guys helped flesh this one out.  I love the heavy arrangement and Luke’s solo on it is an call-time great!” 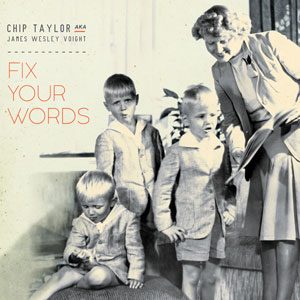 An exquisite new album here by one of America’s finest songwriters.  The cover, an old photo of Chip as a child with brothers Barry and Jon and their mother Barbara, sets the mood before the first note plays.  The songs are deep and intimate; Fix Your Words is a meditation on life that is well worth getting into.

Fix achieves perfection through its imperfections.  Chip is not a great singer, and I’m sure he’d be the first to admit it… but, like a Leonard Cohen or Tom Waits record, you’re paying more attention to the stories he’s telling.  Yes this is the guy that wrote Wild Thing and Angel of The Morning, and his songs have been covered by Janis Joplin, Jimi Hendrix, Aretha Franklin, Willie Nelson, Dusty Springfield and Frank Sinatra but when he’s writing songs to sing himself, it’s a completely different ballgame.

The supple melodies are supplied by Chip on acoustic guitar, John Platania on electric and nylon string guitars, Tony Leone on drums, Tony Mercadante on bass, and Goran Grini on keyboards.  Chip’s vocals, rather than classic pop singing, are more like an intimate conversation set to gentle music.  And if you happen to be staring out the window on an overcast, rainy afternoon while Fix Your Words spills out of your stereo speakers, even better.

This album isn’t for everybody, nor is it trying to be… but those that get lost in the nostalgic stories Taylor is telling will fall in love with it.  Fix Your Words is as real as it gets, which is all too rare in this day and age.

KEY CUTS:  Whatever Devil Is In Me, When I Was A Kid, The Ground Moving Around Me 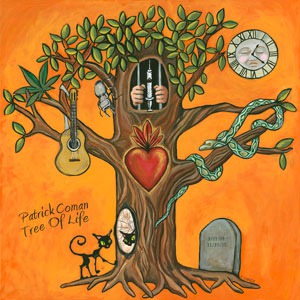 A new outing for this former Boston radio personality and long-time musician here- an ordinary singing voice, but a man with tales to tell.  With the help of drummer Marco Giovino (Robert Plant, Buddy Miller), guitarist Peter Parcek and others, Coman has fashioned an intriguing collection of songs; 11 originals plus a cover of Leon Russell’s Magic Mirror. If The Band is your vibe, you’ll dig this.

Tree was produced by Giovino & Parcek and laid down at Dagotown Recorders in Holden, Mass.  Of Parcek Coman says “Getting to play with Peter over the past few years has been like going to school.”  “Marco has this great studio out in rural Massachusetts that feels like a little clubhouse or what you’d imagine The band had in mind with Big Pink” Patrick observes. “It was a place where we felt comfortable letting our imaginations run wild and really creating a sonic landscape for each song.”

Nearly all of these tunes were written in the months before and directly following the birth of Coman’s first child, and the serious mood of many of the songs (like the haunting opener Heartbeat) are informed by that.  That feeling also ties in with the title of the disc. “The ‘Tree of Life’ comes up in most religions around the world, often as a bridge between heaven & hell or between life and death” he notes. “In the last few months before my daughter was born, I began to think about her time in the womb in the same way and how this symbol echoed my own transition between my previous life and the one I knew I would step into on the day she was born.”

There is kind of a lo-fi sound on Tree Of Life that echoes the work Giovino has done recently with Robert Plant and, while I have those records, I’m not a fan of that ‘old-timey’ vibe, or I might’ve scored this disc higher.  Tree Of Life is a different take on the blues and the lyrics speak to me, and for that I’m grateful. 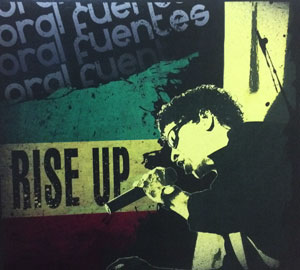 Ah, the life of independent musicians.  This is Oral’s 2nd album, following 2007’s Oral Culture.  He comes to us from Saskatoon by way of Belize, then the Academy of Performing Arts in Cambridge, Ontario.  Rise Up is classic reggae- no more, no less.

Oral’s musical journey began in his home country of Belize where he played in the multicultural band “Caribbean Jam”, playing for local and national events.  Since then his travels have taken him through Mexico, Guatemala, Honduras, Surinam, Guyana, the USA and the Caribbean. After that he signed up with a rock band, The Warriors, who visited Nashville and New York many times.  In ’92, Oral made Saskatoon his home.

Recorded and mastered at Randy Woods Studio in Saskatoon, Rise Up is well-produced, and the groove is king. It ranges from the upbeat vibe of Creole Man, the opening track, to songs like I Saw You, a more relaxed take on love at first sight.  12 of these numbers are Fuentes originals, save Gone Da Manatee, a traditional Belize number.  Romance, political unrest and spirituality, it’s all here for you to enjoy.

Rise Up is ultimately about the joy of life and not letting things drag you down, a message we all need to hear and feel now and again.  If you get a chance to see them play live I recommend it, and that’s not because my nephew Mike plays trombone in the band.  When they start to play the dance floor fills and, before you know it, the party is on.  They gig regularly in the Saskatoon area, and have been known to play The Root in Lloydminster; that’s where the back cover photo was taken.  Throw this on at home or in the car and, before you know it, you’ll be praising Jah too.  To get a hold of Rise Up or to find out about upcoming shows, go to www.oralfuentes.com 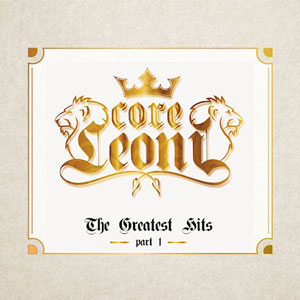 This appears to be a solo-ish project for Leo Leoni, founding member/ guitarist of the Swiss hard rock band Gotthard, paying a very personal tribute to his rock & roll past.  This disc includes a pile of Gotthard classics, plus the new track in Walk On Water. If long-haired 4-on-the-floor rock & roll is your thing, Greatest Hits will float your boat.

The band for this project includes Leo Leoni on guitar, Mila Merker on bass, Jgor Gianola on guitar and Hena Habegger on drums.  Lords Of Black/ Rainbow vocalist Ronnie Romero is at the mic, and he’s the right man for the job. “This ‘Coreleoni’ project made me feel so many emotions and memories, filling my heart with joy” say Leo. “I hope hearing these new versions give all the Gotthard fans, especially the ones who knew and loved the band in the early days, the same great emotions that it has brought to me.

I know nothing about Gotthard, the only Swiss hard rock band I’m actually familiar with is Krokus.  As I’ve said before, there are so many bands out there putting out albums and only so many hours in the day, but hearing the songs on Greatest Hits has me curious about what I’ve been missing.  This disc reminds me of early 80’s Whitesnake; just as bluesy but heavier, driving and full of the primitive, physical charm that the best of the 80’s hard rock genre has to offer.  If I close my eyes I can picture myself blasting up Columbia Avenue in my then-new 1980 Firebird, windows down and these tracks blasting from my Alpine cassette deck… when the chicks were hot, the beer was cold, and the music ROCKED.

Simple math on this one, kids; if classic Whitesnake does it for you, Coreleoni’s The Greatest Hits Part I is REALLY gonna ring your bell.