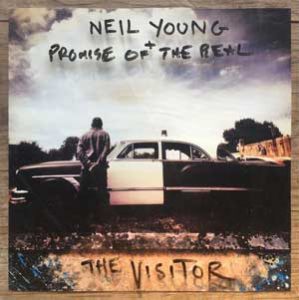 THE VISITOR Neil Young & Promise of The Real (Reprise) *** ½

Too bad Neil has already used the title “Ragged Glory”, it would’ve been perfect for his new collection of songs.  His collaboration with Willie Nelson’s sons Lukas and Micha continues and, as you might expect, The Visitor is a reaction to the times we live in.

“I’m a Canadian by the way and I love the U.S.A” he sings on the first line to the first song, Already Great- obviously a response to Trump’s “make America great again” campaign rhetoric.  When he hit the studio a few months ago the country was headed in a direction he’d never seen before, and he was in the mood to take a creative leap. The Visitor is certainly his most diverse recording in some years, a peek into the heart and soul of a legendary rocker, a real seeker.

The Visitor varies from the acoustic introspection of a record like Harvest to the gnarly guitar rock of almost any Crazy Horse album you’d care to name- particularly Ragged Glory.  He’s clearly in the mood to shake things up too, whether it’s the mash-up of spoken word and rock & roll on Fly By Night or the delicate beauty of Forever, once again asking people to stay open and ready for whatever comes through him.

Neil recorded again at Rick Rubin’s Shangri-La Studios, as he did with 2016’s virtually unlistenable Peace Trail.  This time, Young came out with an inspiring disc that’s like setting off on a cross country trip with no map. He and the band careen from the bare-knuckle rock of Stand Tall to the Caribbean and Latin inflections of Carnival before they detour through the hard blues of Digging A Hole.

The Visitor is kind of ragged but that’s the Neil Young I like best- pissed off and ready to mix it up.  Overall The Monsanto Years was a better album by this particular bunch of musicians, but The Visitor is in the same league. 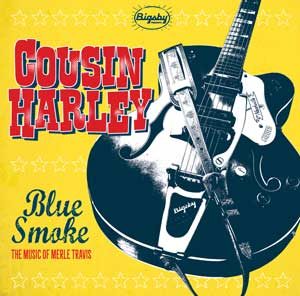 Some records make you smile and feel great from the get-go, and this is one of ‘em.  These are Canada’s rockabilly heroes- Cousin Harley is Paul Pigat, along with Jesse Cahill and Keith Picot, and Blue Smoke: The Music Of Merle Travis covers 11 classics by this legendary country artist (1917-1983), plus one track written by Pigat, a tribute to Travis’s birthplace of Rosewood, Kentucky.

Pigat’s affection for Merle Travis is summed up nicely in the liner notes; “Merle’s swinging finger style playing, driving backbeat and wry sense of humor are cornerstones of the Cousin Harley sound. Always has been, always will be” he says. “And, although we’ve taken some liberties and added a bit of the trademark Cousin Harley flair to Merle’s original recordings, we didn’t veer too far off the track.  Our goal was to pay homage and respect to this inspirational American music icon.  Why mess with the best?”  Indeed.

The best way to describe the musicianship on Blue Smoke is shit-hot.  They play with such precision and joy that Cousin Harley lifts your spirits immediately and at least for the duration of the album.  Merle Travis’s influence in country music is so pervasive you’re bound to recognize some of these tunes.  I’ve loved Tennessee Ernie Ford’s version of Sixteen Tons literally for as long as I can remember, and Cousin Harley’s rendition here is nearly equal.  Cincinnati Lou or Smoke Smoke Smoke That Cigarette anybody?  Even though I’ve never been a smoker, that last song just puts me away.

Blue Smoke accurately represents Merle Travis’s swingin’ style, and his humorous way with words is nothing short of magic.  The making of this record was sponsored by Bigsby Guitars and was recorded at Heavy O Sonic Studios in Vancouver, capturing the spirit of the music perfectly.  Blue Smoke: The Music Of Merle Travis, aside from being a heartfelt tribute, is one of the best sounding and feeling albums you’ll ever hear- even Merle himself would approve. 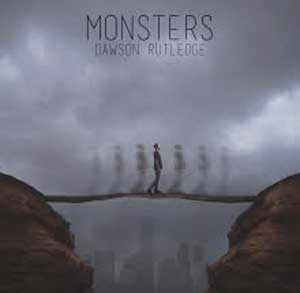 Dawson is a talented singer/ songwriter from Cranbrook, BC, and this is his professional debut.  At 20 years old he already sounds wise beyond his years; I haven’t felt like this about a solo artist like this since I first heard Ray LaMontagne.

I’ve always believed that the right things happen at the right time, and it seems that Rutledge does too.  “When I was in high school I had this great teacher, Evan Bueckert, who had created a recording class” Dawson says.  “In this course we learned a lot about musical composition.  By the end of the course, each student was required to write and record a set of original songs.  At that point I was hooked.”  Don’t you wish you had a teacher like this too? That project, released as Today, Tonight, Tomorrow was a stunner.

The vibe of Monsters, with many of the songs inspired by a break-up, is an acoustic, rustic, organic Woodstock/ Mumford & Sons kind of thing.  A record exec, enamored of Dawson’s music, introduced him to Grammy award winning producer Justin Guip, who worked with Levon Helm for over a decade.  As a guitarist Dawson is a nimble picker, and his singing is unique- he has the flow of a great rapper with the elasticity of a cool jazz singer, and it’s rather hypnotic.

When I reviewed Dawson’s high school project in 2016, I said at the time that “I was frankly shocked that music this subtle and lived in came from somebody so young”, and the same applies to Monsters.  This disc proves beyond a doubt that not only is Dawson Rutledge not a fluke, he is a talented artist with an insanely bright future ahead.

KEY CUTS:  Thief of A Lover, Coffee Shop, Aid Me 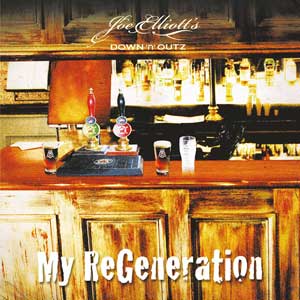 This is a side project for Def Leppard singer Joe Elliot, backed by a band called The Quireboys.  Re-Generation is a re-release of their 2010 debut, while The Further Live Adventures is a new release that features songs from R-G as well as 2014’s The Further Adventures Of.  Both sets are nothing but good time rock & roll, rare tracks connected only by Mott The Hoople- and they’re gangs of fun.

First, a little background from Joe Elliot.  “When Mott The Hoople announced they were re-forming for a week’s worth of shows at The Hammersmith Odeon, I was asked to participate in some capacity” he says.  “They’ve always been my favorite band, and it’s nice to see the rest of the rock world catch up and give them their due.  It was suggested to me that The Quireboys would be up for offering their services.”  Elliot further decided that the band would only play Hoople-connected material, which has led to gigs when Joe isn’t busy with his day job, 2 studio albums and now their second live album, which is also available as a blu-ray.

My Re-Generation and The Further Live Adventures of are refreshingly muscular and melodic guitar-based rock & roll, very reminiscent of the times during which many of these songs were written.  I enjoy this a great deal more than Def Lep’s over-produced, desperately shiny pop/rock, though that has its place and I do have all their CD’s.   This stuff sounds like great barroom rock & roll, like the kind of stuff you could hear any given Friday night blasting from the stage at your favorite bar in the 70’s- for me that would be The High Arrow in Castlegar, BC.

This is solid guitar driven rock that will make you want to get shit-faced on draft beer and howl at the moon, just like great rock & roll should.  DEFINITELY turn this up to 11!

KEY CUTS:  MRG:  Storm, England Rocks, Who Do You Love

TFLA:  Rock & Roll Queen, One Of The Boys, Good Times 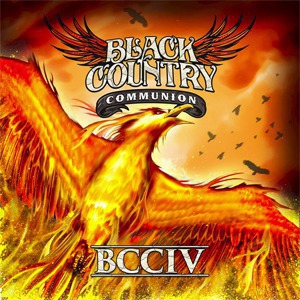 As the title indicates, this is the 4th studio record from this British/ American supergroup.  It’s taken a few spins but I’m warming up to its blues powered hard rock charms, perhaps a bid to be the next Zeppelin.  It’s certainly their most consistent effort to date.

Black Country Communion is former Deep Purple bassist/ vocalist Glenn Hughes, blues guitar great Joe Bonamassa, ex-Dream Theatre keyboard player Derek Sherinian, with Jason Bonham (son of Led Zep’s John) on drums- a real ‘super group’ if there ever was one.   Their last album was 2012’s Afterglow which, Glenn told me in an interview last December, was intended as a Hughes solo record until producer Kevin Shirley talked him into making it a BCC record.  After its release there was only 1 gig planned by management, so instead of the contentious break-up the press would have us believe, each band member returned to their solo activities.  It was during a dinner hosted by guitarist Bonamassa to celebrate Glenn’s induction into the rock hall of fame with Deep Purple that Joe suggested it was “time to break out the heavy bats again”.

BCCIV is the most together record the band has made yet-hard driving, epic melodies, and some inspired playing.  Bonham’s drumming style is hard driving and straightforward, Bonamassa’s solos are positively wicked, Sherinian’s keyboard parts have become more essential to the coloring of the songs, and Hughes remains one of the great rock vocalists- and an inventive bassist too.

On BCC’s obviously titled 2 Bonamassa had a showpiece called Hadrian’s Wall that offered plenty of light and shade, moving from acoustic to thundering electric textures. He replicates that here with The Last Song For My Resting Place, with perhaps even more satisfying results.  Elsewhere they clearly channel Zeppelin- the riff for Love Remains in particular sounds a lot like The Wanton Song, and the drum part for Awake recalls Achilles’ Last Stand.

The ultimate mystery with BCC is not unlike that of Chickenfoot, the band with Joe Satriani, Sammy Hagar, Mike Anthony and Chad Smith. With their power and pedigree, how come more people aren’t responding to the music?  I’m not sure… but BCCIV is Black Country’s broadest and most satisfying statement yet, and I’m diggin’ it.

KEY CUTS:  The Last Song For My Resting Place (with vocals by Joe), Collide, When The Morning Comes 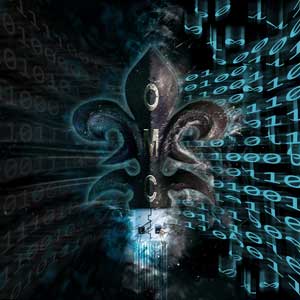 This is the final chapter of vocalist Geoff Tate’s trilogy, released over a roughly 3 year period.  Since his contentious split with Queensryche (he was fired in 2012), with whom he released 13 albums, Geoff has been a busy boy.  There’s some good playing and decent songs on The New Reality, but it sounds like he’s stuck in the 90’s.

Tate is a decent singer, but whether or not he’s one of the greats is open to debate.  He does have a solid band along for the ride here in Kelly Gray, Simon Wright, John Moyer, Scott Mercado, Scott Moughton, Brian Tichy and Mike Ferguson.  ‘Progressive hard rock’ feels like the right label for this endeavor, not unlike Geoff Tate’s old band… and the fact that he chose to name his new band after Q’s 3rd album trades on their name to gain traction for his current enterprise.  That partly makes him the Roger Waters of hard rock; everything  sounds like something his old band would’ve done.

The New Reality features some tasty, muscular guitar work, and Simon Wright (AC/DC, Dio) is a more complex drummer than I’d previously given him credit for.  With Geoff’s voice Operation: Mindcrime immediately sounds like Queensryche, but without quite the same level of finesse.  Perhaps more time spins are needed to absorb the story these songs are telling, but the hard line is I don’t think it is the equal of 1990’s Empire or 2009’s American Soldier by his old band.

The New Reality is good, but sometimes musicians (or singers) who try for a fresh start are doomed to labor in the shadow of their old group- that seems to be the case here.

KEY CUTS:  Under Control, A Guitar In Church, The Same Old Story