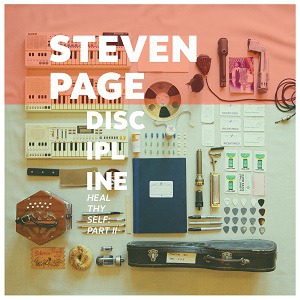 This is Page’s 5th solo album since leaving Barenaked Ladies in 2009.  Heal Thyself, PT. II is a tip of the hat to his many musical influences; punk rock, David Byrne, The Bee Gees, and The Zombies.  It’s a pop-savvy disc with a wide range of engaging styles.

This builds on some of the themes of Instinct: Heal Thyself Pt. I. “(That) was largely about what it is to call yourself an artist” says Page. “(This one) is about being an artist and you look at what’s going on in the United States and the world, and you can’t help but be scared or outraged.  What does it mean to write a song that has some kind of political point of view, and who wants to hear that?  Is it the artist’s place to be bashing people over the head with their politics?  The short answer is yes, I think it is.”

Heal Thyself Pt. II was recorded with longtime live bands Odds, The Original Six, and frequent collaborator Craig Northey.  I can feel Odds’ sense of melodic fun, particularly on a cut like Gravity.  Steven’s voice and lyrics may tempt comparisons to his old band, but this disc goes beyond those boundaries into something more emotionally charged.  Yes there are political messages, but Steve sings about personal relationships too.  Overall, this is a fun album that gives you lots to think about.

KEY CUTS:  Nothing Special, You Fucked Yourself, A Failure 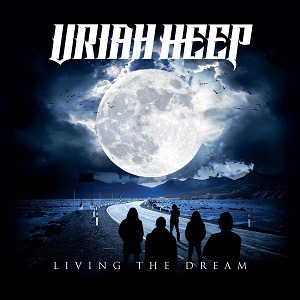 Living The Dream is Heep’s 25th album in a 47 year (so far) career.  “We have seen many bands come and go, so we are in effect ‘living the dream’- so it was the perfect title for the new album” says guitarist and founding member Mick Box.

Living The Dream sounds Deep Purple-ish, thanks to the Hammond B3 work of Phil Lanzon.  Canadian engineer Jay Ruston produced, and I say job well done; he understands Uriah Heep and what they should sound like.  “We chose Jay because we admire his work with The Winery Dogs, Stone Sour, Black Star Riders, Paul Gilbert and Europe” notes Mick.  “Jay has either produced, mixed or engineered these bands, and he brought a fresh approach to Heep.”

Singer Bernie Shaw has been at the mic since 1986 and is the perfect voice for the band’s progressive rock/ classic metal sound.  The double kick playing of drummer Russell Gilbrook and bass playing of Dave Rimmer (the newest member) drives the band, lifting modern records like Dream and Wake The Sleeper into a contemporary vibe.  Musically they’ve really moved on from classic 70’s records like Demons & Wizards to a more aggressive sound that’s great to drive to.

I love their old stuff from my teenage years, but this is far better musically- Living The Dream will be a mainstay in the car for some time to come.

KEY CUTS:  Falling Under Your Spell, Rocks In The Road, Grazed By Heaven 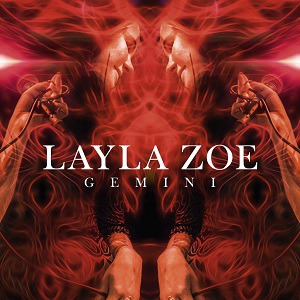 The 13th album by this soulful Canadian singer and longtime guitarist/ creative partner Jan Laacks is stunning.  Gemini is something Layla has wanted to do for years; show the acoustic and fragile side of her voice and personality, as well as the fiery and courageous electric side of her songwriting and vocal ability.  Ambitious- and gloriously successful.

Gemini’s disc 1 is subtitled “Fragility” and disc 2 “Courage”.  Disc one is Layla’s voice and Jan’s guitar- quiet, thoughtful, emotional.  The Deeper They Bury Me is dedicated to one of the Angola Three, Herman Wallace, who was kept in solitary in Angola Prison for 41 years, and died just days after his 2013 release.  The final cut, with Jan on ukulele, is the playful Rainbow Pacmen and Unicorns.  You could sing the kids to sleep with it.

The acoustic gentleness of disc one and the muscular and sassy disc two are flip sides of the same coin, each essential to unlocking the power of the other.  Gemini isn’t just good, it’s exciting. 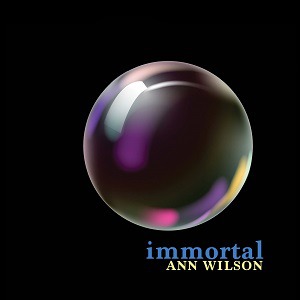 This is a covers album, songs by artists no longer with us.  “(It’s) a chance for me to honor these great artists… to thank them for their messages they left while they were still here” Ann says on her website.  An entire record of cover tunes makes me skittish, and she did that with 2007’s Hope & Glory- but again, she’s chosen the songs well.

Immortal reminds me of an old late night commercial, likely K-Tel, for a record of songs by dead people called Hits From Beyond.  With original Heart producer Mike Flicker at the helm Wilson made some inspired choices, like Bowie’s I’m Afraid Of Americans instead of one of the hits we know all too well, and her rendition of Leslie Gore’s You Don’t Own Me could easily stand as a feminist anthem for today.

You can’t help but compare what Ann has done with these songs to the originals.  I admire that she’s done something different with them, essential in a covers album- otherwise why bother?  That said, the weaker spots here are her takes on The Eagles’ Life In The Fast Lane and Gerry Rafferty’s Baker Street… I prefer the originals far more.

Guest appearances by Ben Mink and Warren Haynes on a couple of tracks each raise the bar here. With Immortal Ann steps out from Heart’s shadow, and for the most part it works pretty well.

KEY CUTS:  I’m Afraid of Americans, You Don’t Own Me, Luna 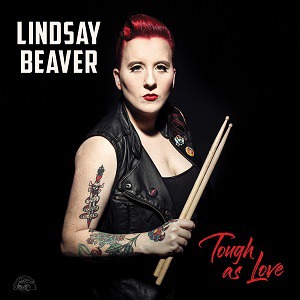 Lindsay Beaver is a blues-rocking, soul-singing drummer, songwriter and bandleader, formerly of The 24th Street Wailers.  Alligator Records founder Bruce Iglauer describes her as “the love child of Amy Winehouse and Little Richard”, and that description fits her like a glove. Tough As Love is a scrappy, bluesy, rockin’ good time for all.

Born and raised in Halifax, Beaver now calls Austin, Texas home.  She is a classically trained vocalist and a jazz-trained drummer with a deep love and knowledge of roots music- from jazz to R&B ballads to raise-the-roof rock & roll.  She says her influences range from Little Richard to The Ramones, from Billie Holiday to Queens of The Stone Age.  Her band includes guitarist Brad Stivers and bassist Josh Williams, and their music evokes the spirit of 50’s and 60’s R&B and blues, and her singing is full of raw, rocking punk energy, unvarnished emotion and power.

“I like music with drive and passion” Beaver says. “I write what I know and sing what I know.  At my shows, I want people to have fun and be moved. I definitely want every person to go home saying ‘I’m never going to forget this.’”  Tough As Love is one of the most passionate, unforgettable records I’ve heard this year. 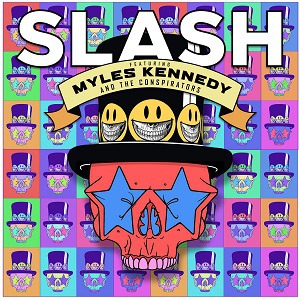 With the success of GNR’s “Not In This Lifetime” tour, I was afraid THIS would never happen again… whew!  Slash is back with a brawny, planet killer of a guitar-based rock record that is just what we need.

Living The Dream is Slash’s 4th solo album and 3rd with his current band; Myles Kennedy on vocals, Brent Fitz on drums, Todd Kerns on bass and vocals, and Frank Sidoris on guitar and vocals.  The producer is Michael “Elvis” Baskette (Alter Bridge, Iggy Pop, Incubus), giving the band a  well-dressed, bare knuckle sound.  Putting this on in the car driving to work the day it was released, I shouted along and pounded on the steering wheel, wishing I was heading out on a road trip instead of the local McDonald’s.

Living The Dream really makes you feel alive, the way a good rock & roll record should do, or at least used to.  It’s riff-based music that instantly lifts your spirit with its energy and drive, thick guitars spouting memorable licks and leads, with the nuclear rhythm section of Fitz and Kerns thundering along underneath. I know Slash came to our attention with Guns but, frankly, he makes much better records on his own and his new disc is all the proof of that you need.  Fucking GREAT album.

KEY CUTS:  The Call Of The Wild, Driving Rain, Lost Inside The Girl