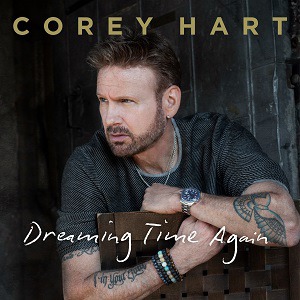 A voice from the past, Corey Hart, has just released his first new music in over 20 years. The pop music landscape is different now, but then Corey Hart… probably doesn’t wear his sunglasses at night anymore either.

“I never imagined when I stepped away from the spotlight to raise my family that I’d be given (this) incredible opportunity all these years later” Corey says of his new album and the impending cross Canada arena tour that starts shortly. We’re surprised too, but then everybody loves a 2nd act, and there is always room for good songs.

Dreaming Time Again is an E.P. with 8 cuts.  It sounds great thanks to producer Bob Ezrin, and guest turns by Jim Cuddy of Blue Rodeo and Alan Doyle are welcome too.  Hart is a solid songwriter and his lyrics reflect the maturity and growth we expect.  Corey doesn’t feel like the same guy here that gave us Sunglasses At Night, and he isn’t.  Marriage, family, life and the passage of time impact each song.

We still hear Corey Hart’s old tunes on radio and so the new songs may surprise you.  I know the big hits and don’t really like them but Dreaming Time Again is different… it sounds good and feels good all the way through.  This is very decent work. 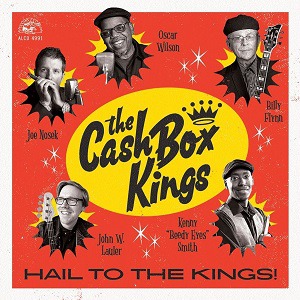 HAIL TO THE KINGS The Cash Box Kings (Alligator) ****

Can’t get to Chicago? The Cash Box Kings bring it to you  with Hail To The Kings, a stout mix of tough Chicago and Delta blues, jumpin’ proto-rock ‘n’ roll, and steamrolling bluesabilly, played with contemporary authenticity. As No Depression sees it, “they satisfy your craving for hardcore Chicago blues, served up hot and tasty.”

Hail To The Kings is good blues and good times, from the hard Chicago sound of Smoked Jowl Blues to the sly humor of Joe You Ain’t From Chicago over a Bo Diddley beat, and the delightful duet between Oscar Wilson and Shemekia Copeland on The Wine Talkin’ is a good time.  This feels like you’re walking into some cool corner dive full of beer, whiskey, sweat and unsavory characters, while these guys blast away on stage.

Recorded in Chicago and produced by the band’s harp player Joe Nosek, Hail To The Kings is their 10 release overall and 3rd for Alligator.  All five guys in the band- including guitarist Billy Flynn, bassist John W. Lauler and drummer Kenny “Beedy Eyes” Smith bring their A game, unleashing masterfully raw and unvarnished blues that rock the house.  “Blues music is used to transform and to find relief” notes Nosek. “Our songs are all about real life topics that matter- good times, tough times and some bad situations.  We raise our voices when we have to, and have a good time doing it.”  Hail To The Kings is a deeply satisfying blues experience. 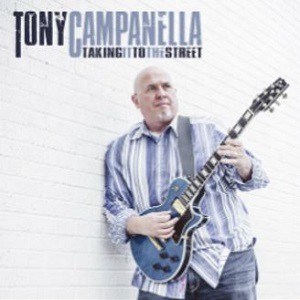 TAKING IT TO THE STREET Tony Campanella (Gulf Coast Records) ****

If your love for the blues centers around great guitar playing, this is an album you need to hear.  Taking It To The Street is hard-as-nails guitar playing with beaucoup de mojo.

Produced by Mike Zito, co-founder of Gulf Coast Records, Street is demolition grade rockin’ blues.  I don’t know Tony’s previous background as a guitarist other than that he’s a veteran of the St. Louis music scene, but he reminds me of a cross between Gary Moore and SRV, playing the blues with hard rock intensity and chops.  This is not a ‘polite’ record, and your neighbors are not going to like it when you crank it up… but screw ‘em- this is for all the times they let their dog crap on your lawn.

Taking It To The Street is packed with excellent guitar playing.  Those Are The Times feels and sounds a lot like Need Your Love So Bad by Peter Green’s Fleetwood Mac- restrained and tasty- but when Tony tears it up on a cut like  One Foot In The Blues, the hair on your arms stands up- and if you’re in the car, speeding tickets are a possibility.

The blues is about feeling and passion as well as musicianship. Mike Zito says of Campanella, who he’s known for 30 years, that “(he) is pure soul, one of the finest guitar players I know.”  Zito is one of my favorite guitarists so I’ll take him at his word; Taking It To The Street is wrecking ball blues. 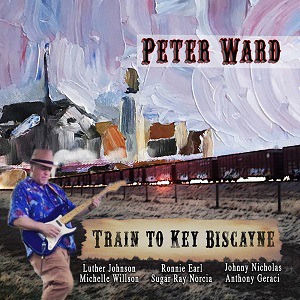 A swingin’ new blues disc from Peter “Hi-Fi” Ward to follow his solo debut, 2017’s Blues On My Shoulders, proof that even people from New England get the blues.

“Peter Hi Fi Ward has been a brother to me since I have known him in 1975” says the guitarist’s guitarist Ronnie Earl. “He plays the kind of music I love- traditional blues, western swing and country, and he’s adept at all those styles.”   Train To Key Biscayne boasts a trainload of New England blues notables as guests in these grooves too including Earl, Sugar Ray Norcia, Luther “Guitar Junior” Johnson, Johnny Nicholas, Anthony Geraci and Michelle “Evil Gal” Wilson to name a few.  Ward’s band includes Neil Gouvin on drums, Peter’s brother Michael on bass and Hank Walther on keys.  I’m a fan of some of these players (I have 11 Ronnie Earl albums) there’s a looseness to these tracks, a sense of feel that really pours on the steam and gives the record some oomph.

Peter played the blues for years in bands with Johnny Copeland, Joe Beard, Jimmy Rogers, Junior Wells and Otis Rush, so it’s only right that he gets a chance to lead the charge for a change.  His last album made it to the top 25 blues charts, and Train To Key Biscayne has the spirit and spunk to do likewise. I like the production overall, but the drum sound feels weaker than it should be- good groove, but not enough “THWACK!” These songs and the musicians playing could turn any juke joint on its ear.

KEY CUTS:  When You Are Mine, Blues Elixir (Ronnie’s Here), As Long As I Have A Chance 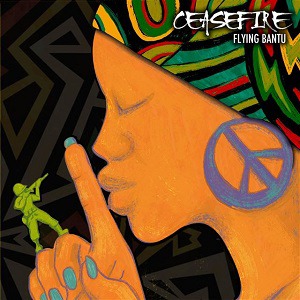 It’s not every day I come across music from Zimbabwe.  Flying Bantu are an Afro-fusion of rock, reggae, jazz and funk, They’ve been on various festival stages in Africa and Ceasefire, their first full length album, is a bid for international recognition.

FB have opened shows for some big South African acts; Zimbabwe’s Oliver Mtukudzi, Johnny Clegg, Freshly Ground, PJ Powers and The Parlotones; names we may not be familiar with (except Clegg) but worth getting to know.  The band says that their “hope is that our reach transcends borders set by culture, race, religion and even genre in a quest for togetherness.  We are expressing something born of a 21st century Africa.”

Production notes were not available for this release but the way Flying Bantu weaves that laid back reggae vibe with sinewy funk lines and sharp jazz musicianship is very cool.  I can’t understand them when they sing in their native tongue (like on Hezvo, the opener) but I can feel it and that’s what counts.  A song like the title cut is obvious lyrically and relevant too, as they find many ways to address the human condition.

Ceasefire feels a bit like classic Bob Marley, which is very okay.  It’s a refreshing, adventurous record, a well played combination of reggae with jazz and funk for satisfying results. Flying Bantu has done something special here. 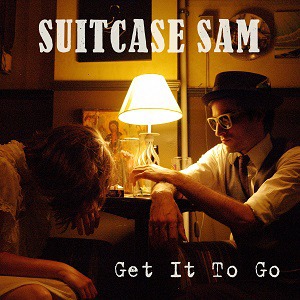 If time travel exists, music is the it gets done.  That’s true when you listen to Get It To Go, inspired by 1920’s traditional jazz. Suitcase Sam compares to Leon Redbone- you’ll either really enjoy this or you won’t see that charm- and that’s okay.

I read Sam’s bio on his website and he’s an interesting guy.  His dad was a railroad engineer with the Central Pacific and Sam road the rails with him, drinking up all the great American musical traditions- which explains Get It To Go.  The guys in the engine yard laid him down reverently at the feet of the masters; Mississippi John Hurt, Emmett Miller and Jimmie Rodgers, and you’ll feel that in these songs.

Get It To Go is Suitcase Sam’s first time out with Curve Music, but it’s actually a re-release of an EP he put out in 2010 after moving up to Toronto.  It’s not a big production; just Sam’s voice, piano, acoustic guitar, the occasional kazoo and some vintage jazz coronet to sweeten the tunes.  It’s like visiting a world I’ve only known on film and so it holds some fascination.  This EP is quirky and whether you dig it or don’t depends on how elastic your boundaries are.  It’s the equivalent of finding a dusty, groovy antique shop, and it’s a refreshing change from what I usually listen to. 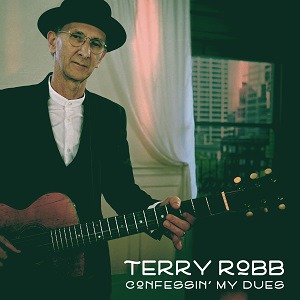 Jaw-dropping acoustic blues- that’s the 15th album from this Portland, Oregon guitarist. Living Blues praises him as “one of the finest acoustic guitarists on the international scene (with) exquisite musicality- a player of dazzling skill and technique” and holy cow with Confessin’ The Dues are they ever right.

This disc is all over the blues stylistically; country blues to Coltrane, ragtime to Hendrix, Americana to American Primitivism, and yet it makes sense as an album.  ‘Dazzling’ isn’t powerful enough to describe Robb’s playing- I haven’t been rocked like this by acoustic guitar music since I first heard Tommy Emmanuel.  Whether he’s playing an instrumental or a vocal track by himself or leaning into it with his severely talented band, Terry’s expressive precision is inspiring  for players and non-players.

Confessin’ My Dues, produced by Robb, is a mix of vocal and instrumental tracks, some solo and some with the band.  From the opening bars of Butch Holler Stomp to the last notes of Blood Red Moon, Terry Robb gets your attention and holds it with nimble, articulate, stunning guitar playing. He packs emotion into every note and string bend, with an ear for blues melodies that sound familiar yet feel fresh.

I’ll leave the final word on Confessin’ My Dues to Greg Johnson, president of Oregon’s Cascade Blues Association; “(this album) is yet another example of Terry Robb doing what he does best- leaving us all with a sense of awe and joy with every note he plays.”  Yeah… that’s exactly it.  Release date is May 31st. 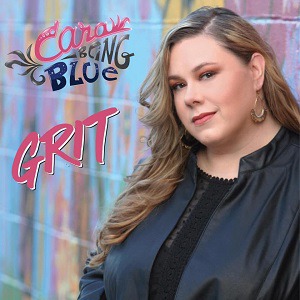 Cara was a pro blues jam host, and following the successful release of her 2016 EP Full Throttle she’s back with her first full length album.  Grit comes to us via Nashville, but there’s not a lot of twang in these dark back alleys.

Cara Being Blue’s is the blues, described by Whit Hubner as “like honey butter sliding over a homemade biscuit made by Bonnie Raitt on a cool Saturday morning.  Crisp and clear, but with enough grease to make you a believer.”  ‘Grease’ is a word I use often to describe blues I like, and that applies to Grit.  Her voice isn’t pretty, it’s forceful and dramatic, grasping the nuances of the blues with emotional accuracy.

That Grit is so enjoyable owes as much to the band as it does to Ms. Blue’s writing skill and vocal muscle.  I won’t list them all but Eric Robert’s keyboard work is crucial, and the contributions of 4 different guitarists do much to take us back home.  Cara and her band have been nominated for blues awards 4 years in a row by the Nashville Industry Music Awards, so the biz is taking notice of her too.

Grit is dedicated to “women with grit, especially two close friends who, after fighting with integrity and grace, passed away of cancer.” When Cara Being Blue and her band sing and play you can really feel it- and that counts for everything.