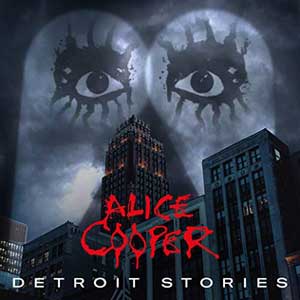 Alice Cooper’s 28th studio album is a love letter to the city where he was born.  Detroit Stories follows 2019’s Breadcrumbs EP with a muscular set of hard rock tunes, what Gareth Williams from Wall Of Sound calls “(a) back to his roots mix of blues, jazz, soul, hard rock, humor and heart.”  Gathering lots of Detroit musicians for this plus the surviving members of the Alice Cooper group on a couple of cuts, it’s a solid record.

Producer Bob Ezrin is back again… he was there for lots of the early stuff, and renewed his collaboration with Alice for 2011’s Welcome 2 My Nightmare.  When Bob started working with the group in 1971 he had great raw material to work with, and the scene was different.  “Detroit was heavy rock central then” Alice says on his website.  “Los Angeles had its sound with The Doors, Love and Buffalo Springfield, San Francisco had The Grateful Dead and Jefferson Airplane.  New York had The Rascals and The Velvet Underground.  But Detroit was the birthplace of angry hard rock.”

Detroit Stories was recorded at Rustbelt Studios in Royal Oak and includes Michigan rockers like Wayne Kramer (MC5), Mark Farner (Grand Funk), Johnny “Bee” Badanjek (The Detroit Wheels) and legendary jazz/ R&B bassist Paul Randolph. Stories feels like Motown inflected hard rock, the vibe they were surely shooting for.  The album includes covers of Bob Seger’s East Side Story, Fred “Sonic” Smith’s Sister Anne and Lou Reed’s immortal Rock & Roll, which has been covered by a multitude of other bands including The Runaways on the their self titled debut.

Cooper’s records since his late 80’s comeback have not been big hits. Albums I really dug (Brutal Planet, Dragontown, Dirty Diamonds) sold poorly, his last platinum album coming in 1991 with Hey Stoopid.  Detroit Stories is spirited rock & roll laced with attitude and Motor City grooves, but it won’t affect a commercial resurrection, but some of us have been along for the ride for decades and glad he’s still making solid records.

Detroit Stories is a throwback to the rough and tumble days of garage rock, though more refined sonically, and how that idea makes you feel and whether or not you’re an Alice fan to begin with will be the deciding factors.  I’m betting this will sell mostly to guys my age, but of course that’s just my opinion- I could be wrong. 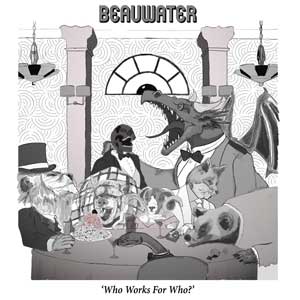 This is the 2nd album for these Newfie blues rockers, after 2016’s award winning Lovers, Fools & Kings.  Who Works For Who walks the tightrope between the two genres, never being completely one or the other.  Hard driving riffs and vocals, sharp lyrics and a soulful feel almost make this play like a long lost Skynyrd record.

This reminds me a bit of Big Sugar groove-wise, so it was interesting to note they’ve shared stages with that band.  They’ve also rubbed up against Our Lady Peace, Third Eye Blind, The Trews and Matt Mays.  Even though this trio is from Newfoundland I get a strong southern vibe from this batch of songs and an earthy, blue collar sensibility that feels real good.  Beauwater is Jonathon Reid (vocals, guitar), Greg Newhook (bass) and Mike Maddox (drums).  It was produced by Chris Kirby (he did the first one too), and extra help came from Kelly Hoppe of Big Sugar on harmonica, Chris Harnett on sax, Terry Campbell on trumpet and producer Chris Kirby on keys.

I enjoy the various soundscapes we get to travel with Who Works For Who from the power shuffle of Flavor Of The Week to the noir jazz of The Broken Man Behind The Wheel, a sultry and swinging tale of love lost and forgotten we can all relate to.  Overall it’s a rugged, blustery guitar driven sound, and Reid’s vocals have the power to cut through.  Nothing overly fancy about the mix either, but you wouldn’t want that with an in-your-face record like this.  I’d peg this as Big Sugar meets Lynyrd Skynyrd with a touch of Allmans lyrical savvy.

It’s pretty easy to tell when a band is in it for chicks, fame and cash (not that there‘s anything wrong with that) but when a band plays because they have to, that’s the good stuff. Beauwater leaves to no room for doubt here that they mean it.

KEY CUTS:  One Way Out, Flavor Of The Week, The Broken Man Behind The Wheel, Tonight She’s Gonna Burn 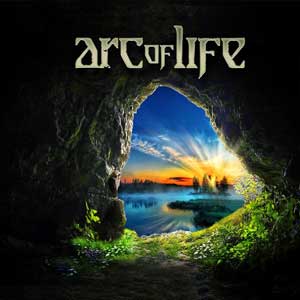 This is the debut for this progressive rock collective.  If it sounds familiar to you that’s because the group features 3 members of the current Yes lineup; vocalist Jon Davison, bassist/ vocalist Billy Sherwood and drummer Jay Schellen.  Interesting yet somewhat anemic, Arc Of Life doesn’t do it for me.

The stated concept behind Arc Of Life is “in keeping with progressive rock philosophy, to craft creative, challenging and ear-pleasing music that pushes boundaries.”  To that end, this album features oddball time changes and complex arrangements, but this genre isn’t my thing and I can’t really tell on that level if this is any good or not.  Arc is rather Yes-y overall but more the 80’s-90’s stuff where the band went commercial as opposed to the 1970’s when they routinely issued albums like Fragile that blew people’s minds.

Arc Of Life is a semi-successful melding of mid-period Yes with classic Genesis, and on first listen it feels like one huge song.  It is well produced, and with the keyboard heavy arrangements and the vocals of Jon and Billy, it’s Yes lite.  But is that a good thing?  Yes’s music has been hit and miss for me in recent decades; for every Roundabout or Owner Of A Lonely Heart there are a pile of songs I can’t identify or remember.

There is some pretty cool playing here from bassist Sherwood and guitarist Jimmy Haun, but there’s something cold about this record.  The PR stuff that came with this claims that “repeated listens reveal more layers” but I’m not sure that’s the case.  Arc is flaccid on first impression- I don’t think I’ll spend any more time on it. 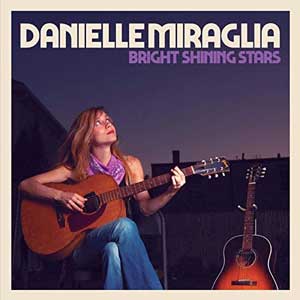 The press is right to call Danielle “explosively gifted”.  Bright Shining Stars, a solo acoustic record that’s been out since October 16th, is riveting.  With occasional help here from a handful of friends, Ms. Miraglia makes an unforgettable impression.

Danielle Miraglia is known in Boston for her solo acoustic shows as well as gigs with her band The Glory Junkies.  She has been compared to Bonnie Raitt, Rory Block and Lucinda Williams and, having heard BSS, I heartily agree.  Danielle was nominated for a 2015 Boston Music Award for “Singer/ Songwriter Of The Year” and her band in 2018 for “Blues Artist Of The Year”.   Her thumb-heavy percussive acoustic guitar playing style serves her blend of folk, blues and roots well, and contributors like Peter Parcek (electric guitar), Laurence Scudder (viola) and Richard Rosenblatt (harmonica) add more depth and soul to an already terrific batch of songs, a mix of originals blending seamlessly with numbers by Bob Dylan, Big Bill Broonzy, Ma Rainey and Janis Joplin.

In the words of Lauren Daley from The Boston Globe “Miraglia has a voice that can go from a raspy come-hither purr to an Etta James-esque powerhouse belt” and that’s about the size of it.  Bright Shining Stars is a warm and intimate listening experience that plays like a conversation with good friends and leaves you feeling that everything is going to work out just fine.  You’ll be able to compare the better known songs here (C.C. Rider, It Hurts Me Too) against the versions you already know and decide for yourself if Danielle Miraglia is a worthy torchbearer for this kind of music-  there’s no doubt in my mind that she is.  Bright Shining Stars holds up magnificently under repeated spins.

KEY CUTS:  When Things Go Wrong (It Hurts Me Too), C.C. Rider, Pick Up The Gun 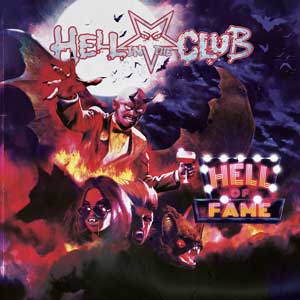 This is the 5th album for these oddly named Italian rockers. Out since September, Hell Of Fame is as hard hitting as it is melodic.  While there’s a certain aggression in the playing I don’t know that I’d call it heavy metal, it feels too refined for that.  Well played and produced, this just might be the record that puts Hell In The Club on the world stage.

H.I.T.C. includes members of Elvenking and Secret Sphere, and the music they make is a potent mix of classic hard rock, modern sounds and metal while they crank out party songs, rock & roll with a 50’s sensibility, and everything in between.   The press I received with the download lists the band members only by their first names; Dave (vocals), Andy (bass), Picco (guitars) and Mark (drums).  Hell Of Fame was recorded, mixed and mastered by Simone Mularoni in San Marino, Italy.  It’s an impressive sounding record with layered vocal harmonies and stacked guitars driven by muscular drumming.  Andy’s bass work provides the pulse and heartbeat of the songs as he obviously plays with a pick to cut through the din and the roar.

Dave is a good rock & roll singer with a Bon Jovi-esque sense of melody and rock drama.  Hell Of Fame dishes up a tasty ballad like Lullaby For An Angel, then storms towards the finish line with Mr. Grouch  and No Room In Hell that come off like a cross between early Skid Row and Guns ‘N’ Roses.  Stereotypical 80’s rock? Sort of, but a few spins reveals that there is more going on here musically than is at first apparent.

Over the course of the entire album Hell In The Club offers up a judicious mix of vibes like the songs just mentioned while being careful not to slow things down too much or too often… the delicate balance of trying to be commercial without selling out.  I find myself liking Hell Of Fame a bit more with each time around.