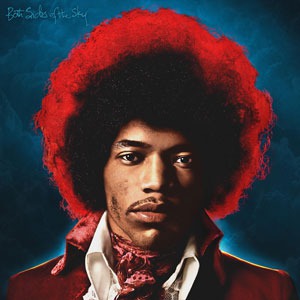 Another ‘new’ album from Jimi featuring 13 tracks, 10 previously unreleased.  Both Sides, due out March 9th, is also the 3rd in a trilogy that started with Valleys Of Neptune in 2010, and continued with People, Hell & Angels in 2013.  You’ve heard different versions of some of these songs over the years, so how stoked you get about this new set will depend on how big of a fan you are.

“Since Experience Hendrix began its restoration of the Jimi Hendrix music catalogue in 1997, our goal has been to present these important recordings to Jimi’s fans in the best possible quality” says co-producer John McDermott (along with Jimi’s sister Janie and Hendrix producer Eddie Kramer) and indeed, the sound quality is quite spectacular. “We are excited about achieving that. We’ve also been intent on generating album releases which present this music in its proper context.”

What many seem to lose site of when considering the Hendrix canon is that Jimi was a bluesman first, a psychedelic pioneer second.  Both Sides Of The Sky is some great blues- Hendrix keeps his six string freak outs in check as he knuckles down for some hard time killin’ floor blues.  Many of these tracks were recorded by The Band Of Gypsies, including Billy Cox on bass and Buddy Miles on drums.  An up-tempo reworking of Muddy Waters’ Mannish Boy gets things rolling and Lover Man, a Hendrix original, was attempted by the original Experience but this 1969 take by TBOG- complete with an homage to the Batman theme song- was the strongest version yet.

Some tracks on Both Sides of The Sky include Stephen Stills, Johnny Winter and Lonnie Youngblood, well-known cohorts of Jimi`s.  As a straight-up blues record Both Sides is very satisfying. As a deeper peek into this side of the legendary guitarist, it’s priceless.  Sonically, it’s the best sounding posthumous Hendrix release yet. 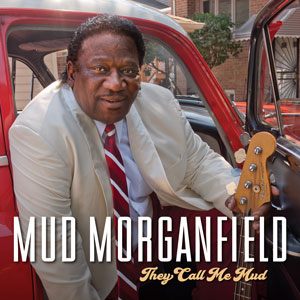 This is the son of the legendary Muddy Waters.  He follows up 2012’s Son Of The Seventh Son and 2014’s For Pops with a varied collection of songs, reflecting his interest in R&B, jazz and, of course, the blues.  They Call Me Mud is quite agreeable company.

Mud wrote 10 of the songs on this record and covered a couple of tunes from his father’s catalogue; Howling Wolf and Can’t Get No Grinding.  “I think this is some of the best work I’ve done yet” he observes about his new disc. “With the variety of material I have on here, people will get a chance to hear the other sides of my music; everything from soul and R&B and, of course, the blues. I got to play bass on 3 songs too, and I’m so proud to have my youngest daughter, Lashunda, sing with me on this album.”

When you put on They Call Me Mud, as soon as he opens his mouth there is no doubt you’re listening to the son of Muddy Waters.  Backing him is a stellar cast of Chicago musicians adding some authentic, down home touches to this recording; Billy Flynn on guitar, Studebaker John on harp, Sumito Ariyo Ariyoshi on piano, E.G. McDaniel on bass and Melvin “Pookie Stix” Carlisle on drums.  I don’t know if they have a history together, these players, but they swing and move with a telepathic grace that’s wonderful to bask in.  When used, the horn section really lifts some of these songs up too.

Some blues albums like to get down and dirty while others are more interested in showing you a good time.  They Call Me Mud is the latter, and that’s fine by me.

KEY CUTS:  They Call Me Mud, Howling Wolf, Rough Around The Edge 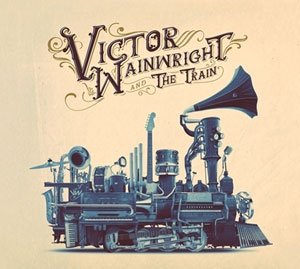 Boogie-woogie piano player Victor Wainwright has stepped into a band situation, resulting in this rollicking self-titled debut for Ruf.  As the title track says, “If you wanna boogie get aboard this train/ get yourself a ticket or get out of the way!”

The 12 tracks on this disc are all originals, powered by Wainwright’s wicked keyboard skills and gravelly voice. “I wanted to write this new music mostly on my own as it was coming out and speaking to me” he says. “I believe that, for roots music to grow and reach out to new audiences, we have to push it forward.”  He’s right, of course- it results in an album that walks the tightrope between scholarly and irreverent when it comes to boogie-woogie and blues.  From heartfelt ballads to barrelhouse thrillers, it’s all here; even Latin flavours, the New Orleans horns of Wiltshire Grave, and the mellow near psychedelia of Sunshine.

A record with this much joie de vivre relies heavily on the band, not just the singer. “I ended up with a hit-squad of downright amazing musicians that shared my curiosity for all corners of the roots genre” observes Wainwright. “We wanted to capture how we feel performing, and I believe we’ve done that.  Now I just try to keep up!”  Other than Victor on vocals and keys, the band includes Billy Dean on drums, Terence Grayson on bass and Pat Harrington on guitars, along with a plethora of special guests too long to mention.

Victor Wainwright & The Train sports excellent playing that explores many different pockets, so you’ll want to listen to it often… turns out this is a pretty spirited ride. 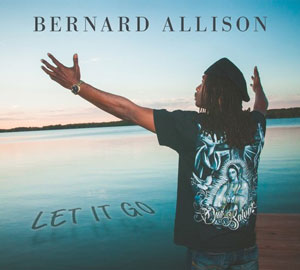 The blues I really love revolves around great guitar playing and Bernard Allison is unstoppable.  He’s come back to Ruf, the iconic German blues label created in 1994 to serve as a home for his father, the late Chicago heavyweight Luther Allison.  Let It Go is a homecoming of sorts, and pops would be very pleased to hear what Bernard is up to.

The disc starts in fine style with Cruisin’ For A Bluesin’ as Bernard sings gonna groove on down this highway/ got my guitar in my hand, setting the tone for the rest of the record.  Other than Allison’s exquisite tones and playing ability, what makes Let It Go such a great listening experience is that he and his band aren’t afraid to switch things up within a blues context. An acoustic ballad closes this thing out, and Leave Your Ego is a rough-edged Hendrix-worthy blues that tips a hat to Luther. “It’s all about my dad’s saying, ‘leave your ego, play the music, love the people’” Bernard says. “We honour that quote every day.”

Let It Go is a mighty blues album, and the funk and jazz touches in a song like Same Ole Feeling make it feel like this disc can go just about anywhere.  I also love the spirit with which Allison and his guys play. “We all just came together as a group to create this album” he considers, “to show our chemistry as friends and band mates. My favourite memory was watching the faces of everyone involved in the session.  Everyone came to lay it down and gave 110%.”

As far as the blues go this isn’t the rough and tumble Friday night juke joint stuff I usually go for but the playing on Let It Go is mighty tasty.  Allison’s guitar is quite tasty,  including some sweet leads… and that makes this disc a winner in my books. 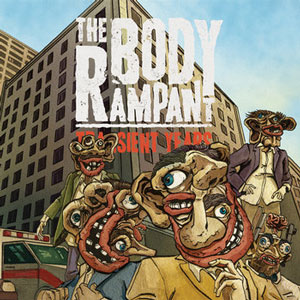 A new album here from Los Angeles-based indie rockers The Body Rampant.  RMPNT follows 2013’s Midnight Mayfair E.P. with 11 rockin’ tracks that will surely please the faithful.  Some cool stuff here from a group that prides itself on being an ever-changing organism that adapts to rock’s ever-changing landscape.

RMPNT is an intriguing intersection of noisy hard-ass rock with rock rhythms meeting techno elements, noises and production techniques.  I’ve only been to LA once so I’ve never had the chance to see them live, but the bio that accompanied this release says they “often explore every inch of their stage. Armed with avant guard handmade masks by world renowned artist Duarte Flatmo, these miscreants will grab your attention with their off the wall imagery, and their handcrafted indie meets art rock sound.”  Sounds like a good time, doesn’t it?

The Body Rampant plays heavy guitar-based rock with pop smarts, infusing their songs with melodic lines that linger after a song has faded, and an almost pop craftsmanship approach to vocal harmonies and melodies.  The guitars blast and roar and the drums come on hard and heavy for the most part, and they like to fill the spaces in between.  The results are quite noisy, and that’s a vibe favoured by listeners quite a bit younger than myself.  This kind of organized chaos is really quite diggable, but it helps to be in the right agitated state of mind for ultimate receptiveness.

I enjoyed RMPNT more than expected, and appearances by Thomas Pridgen (Mars Volta), Bradley Walden (Emerosa), Daniel Wand (Capsize) and Ryan Hunter (Envy On The Coast) are worth noting.  If you feel like getting yer ya-ya’s out, The Body Rampant’s new album should do it for you. 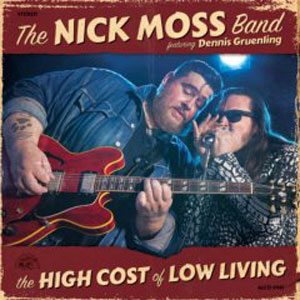 Guitarist, vocalist and songwriter Nick Moss is a 30 year vet of Chicago’s tough-as-nails blues scene, and New Jersey’s Dennis Gruenling is considered among today’s best blues harmonica players.  Though they’ve jammed many times over the last 20 years, The High Cost Of Low Living is their first record together- and it’s blues magic.

The High Cost is the classic Chicago blues sound I secretly hope for whenever I put a new blues album on.  Rather than recycle proven classics Moss prefers to write his own stuff, and Gruenling has written a couple here as well.  Produced by Moss & guitarist Kid Anderson and recorded at Rancho de Rhythm in Elgin, Illinois (a Chicago ‘burb, if memory serves), this disc is a joyous sonic blast of pure rockin’ blues power.

Moss grew up in Chicago where his mother, a huge blues fan, took a young Nick to see bluesmen like Muddy Waters live in Concert.  As a teen, Dennis heard the Alligator recording Harp Attack! (a summit meeting of James Cotton, Junior Wells, Carey Bell and Billy Branch) and decided that blues harmonica would be his life’s calling.  It’s their combined depth of feeling for this music that makes The High Cost Of Low Living a muscular, high energy party.

Alligator president Bruce Iglauer says “It’s very exciting to bring artists to the label who are so deeply rooted in the Chicago blues tradition, but creating fresh new songs to carry that tradition forward.  Nick’s a thrilling guitar player, a gritty, honest singer, and his band is tough as nails. Dennis is a blues harmonica master and a terrific showman.  This is a partnership of two world-class talents in one band. These are artists that any fan of the blues has got to love.” Yeah… what he said.  The High Cost Of Low Living is one album that every blues fan really should have.

KEY CUTS:  The High Cost Of Low Living, Note On The Door, He Walked With Giants