This July will be the 30th anniversary of the release of Die Hard. To celebrate the anniversary, Laemmle Theater’s included Die Hard in their Anniversary Classics Series. From the film, Bonnie Bedelia (Holly Gennaro McClane) and Reginald VelJohnson (Al Powell) joined screenwriter Steven E. DeSouza for a Q&A and Gonzo was there to hear them share stories about making this legendary film.

Q: Is Die Hard changed a lot from the novel Nothing Lasts Forever?

SD: Yes, and in fact the novel is a sequel to an earlier novel. There’s a good bar bet you can make if you go up to a stranger in a bar and say, “You know that part Bruce Willis plays in Die Hard 2 and Die Hard 3 and 4 and 5? Who played that part first and in what picture?” When they say, “Bruce Willis in Die Hard 1,” you say, “No, Frank Sinatra in The Detective” and run out of the bar real fast before they break your thumbs. The characters that you know in Die Hard are in the original book. The picture was actually offered to Frank Sinatra. Contractually, Fox had to offer the movie to Sinatra because he made the previous picture. Fortunately, he said, “I’m too old and too rich to do this more” or the chases in the building would’ve been on Rascal scooters. Jeb Stuart, a wonderful writer who did The Fugitive and a lot of other things had done a draft of the picture that was a little truer to the book than the version I did. The one thing I did not change was this normal hero. You’ve got to remember, in the ‘80s you had these Rambo and Schwarzenegger movies where these superhuman demigods were the heroes. Just having a normal hero, almost every actor in Hollywood turned it down. Finally, in desperation because they had a release date, they went to Bruce who had a TV show at the time. So he was working days on the TV show and nights on the movie.

BB: He really had to go back to Moonlighting. We would do a scene and he would go across the alley to do a little scene of Moonlighting. He would come back and say, “It feels like I’m back in Kindergarten.” They had these really simple sets. We were on a set  that cost, do you have any idea what that set cost?

SD: I don’t know. A lot of the movie is filmed in the actual building there. The unfinished floors, that was in the real building.

BB: But the three story set with the waterfalls and everything.

Q: Was Bruce easy to work with at that point?

BB: I don’t think it’s because of this movie. I think that’s just who Bruce is. He’s a very confident guy. Some people call him cocky but confident, I would say. So he was doing Moonlighting and then suddenly he was doing this gigantic movie and it was publicized, everybody knew he was getting $5 million which was a lot of money at that time, for someone who hadn’t made any movies. He was on a TV show. I said to him, probably the first day we were shooting, he had just met Demi so he was running off to his trailer with Demi all the time. I just wanted to get to know him a little bit so he said, “This set is unbelievable. Have you ever worked on a set like this? This is a big budget movie.” I said, “Yeah, and you and me alone are making over $5 million.” So we were friends after that.

RV: He was very nice to me because it was my first film. He was a very kind and giving person. I loved him. I thought he was wonderful to work with.

Q: Was it really different for you doing an action movie?

BB: I understood that I was Bruce’s idea actually. They were having a hard time casting this role because they didn’t want a real glamorous person. They wanted someone who would be believable as the wife of a cop, but would still not be a dog. I’m not sure what Bruce saw but Joel told me that he called him up.

SD: I was told it was Heart Like a Wheel is what he saw.

BB: I was actually very worried about it. I think I said at the time, foolishly, was a little precious about my filmography. I didn’t see action films. I wasn’t interested in them. How does this fit in with these other movies I did? So I went to meet them. They talked me into doing it and I think it was on the Moonlighting set, so I was in Bruce’s trailer with Joel Silver and the casting director and Bruce. We chatted and I guess they felt I was being very resistant. Joel said, “More people are going to see you in this movie than in all the other movies you have ever made and will ever make again all put together.” It turned out he was right. They still put that next to my name. It’s always: Bonnie Bedelia, Die Hard. And I think this sort of changed action films because now I’ve seen some. I saw action films after this and it was a different animal completely. 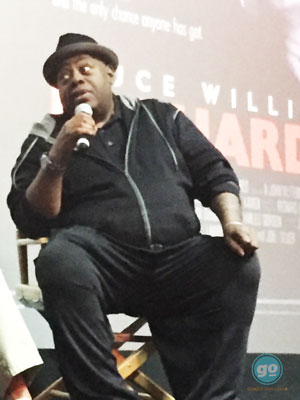 Q: Did you think it was interesting that Holly was an executive who put her job ahead of her husband in 1988?

BB: I guess so. There wasn’t a whole lot of that but just enough to indicate it. I think I worked for his character. I think I made him more believable or likable because he was married to someone who was real.

Q: Did it change your life?

RV: It certainly changed my life. It really did. When I was doing the film, the person who saw a screening of it was one of the producers of Family Matters. He said, “We’d like for you to come in and read this part.” I got the part on Family Matters because of Die Hard and I thank him for going to see that screening of the film that day. It was a life changing thing for me.

BB: I don’t know. I think I did Presumed Innocent after that but I’d already talked to Alan Pakula about it.

BB: I was trying to get in on the love story that was actually between him and Bruce. 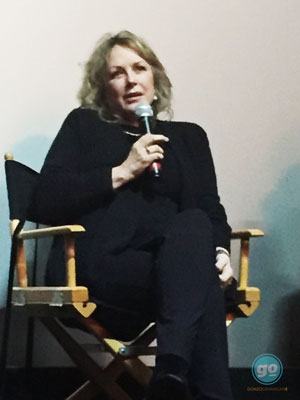 Q: How about the late Alan Rickman?

BB: I loved Alan Rickman. He was my buddy on the movie. We hung together because there was no one else because Bruce was with Demi. This is a wonderful actor fresh from the London stage. He was supposed to throw me to the floor. He said, “I’m not going to throw her to the floor, manhandle women.” Joel said, “No, you’ve got to push her, shove her, do something. Get her on the floor.” He said, “Hans Gruber isn’t going to throw a woman to the floor.” This discussion went on, I’m not kidding, maybe a half hour, 40 minutes. Joel got so frustrated he said, “Alan, I’ve made 12 of these movies. Each one has made $150 million. The broad’s gotta go on the floor.” That was when I realized that’s who I was playing. I was playing the broad, but he didn’t throw me on the floor. He takes my wrist and pulls me toward him and I took the initiative to get away from him and sink down to the floor because Joel had to have me on the floor for some reason.”

SD: After the first scene or two she did with Alan, everybody was so electrified by the way they played that we added more scenes for them. You may remember, your part got bigger as the movie went along.

RV: What has become of Mr. McTiernan today? I haven’t heard from him. I haven’t seen him. Is he planning any films or anything? I think he’s one of the best directors ever.

SD: I know he’s talked about a couple movies in development. He was off the market for several years and we’re waiting for something to come back. He’s looking to develop something I suppose. He did some super elaborate commercials. By the way, that’s not a step down. A lot of the top directors move back and forth between movies and commercials all the time. It’s a very nice business for film directors.