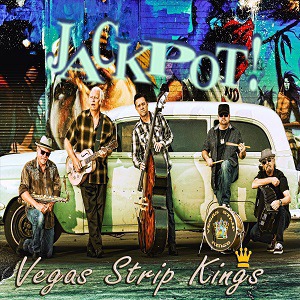 This one of the most fun records I have come across in awhile.  Excellent musicianship forges a mix of blues-based Americana with rockabilly and Zydeco, like Stray Cats if Dr. John joined. Vegas Strip Kings are a blast of fresh air and Jackpot! is awesome.

Jackpot! combines a sense of suavity with a sense of fun.  Raised from the ashes of the acclaimed Blind Pig Records project Cantino, Vegas Strip Kings make a joyful bluesy noise that I find irresistible.  Billy Pruitt’s accordion is the secret ingredient, giving many of these songs an almost exotic vibe that transcends the usual swingin’ blues workouts, and the playing has the looseness of a bunch of craftsmen really enjoying themselves.

The press release says “To see Vegas Strip Kings is like watching a train rolling at high speed down a mountain pass- it’s frenetic, exhilarating, and you might often wonder if it’s about to run off the tracks but- it never does”- which is how I used to feel about Deep Purple- and listening to this disc gives you that sense.  Jackpot is the sound of great, seasoned musicians having a blast, and there are few other things in this life to match that thrill.  Exotic yet earthy, never out of control, and uplifting- that’s Jackpot! 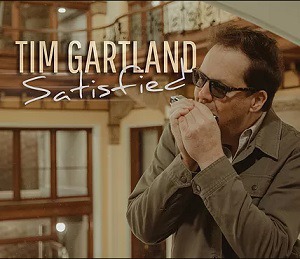 If harp-driven blues excites your mojo, Tim Gartland’s new record is for you.  Satisfied, his 4th solo album, recorded in Franklin Tennessee, is the epitome of grooviosity as it blends blues, soul, roots rock and country.  But you gotta wait; it comes out April 12th.

I like the way the music on this record moves.  All the songs on Satisfied were written or co-written by Gartland and recorded in just two days to capture the intimate, immediate and natural sound of musicians creating music in a terrific sounding live room- makes me wish more albums were made this way.  Tim has a casual, low frequency voice with an old school country feel and the players on this disc, who have worked with artists like Delbert McClinton, Susan Tedeschi, Duke Robillard, Tina Turner and Joe Cocker, know how to give him exactly what he needs to make the songs work.  It doesn’t hurt that Gartland has played with Jerry Portnoy, Bo Diddley, Carey Bell, Big Jack Johnson and Pinetop Perkins.

Let’s not forget, too, that Tim is a world class harp player who knows his blues. “The blues is essentially a genre in which the musician is having a cathartic experience” he notes.  “If you write about themes that are meaningful to your experience, you will create something new.”  The most deeply successful albums are the ones where listeners can find themselves in the songs and say “Yeah, I’ve been there too”-  I’ve had that experience time and again with Satisfied. This is pretty cool stuff.

KEY CUTS:  Drinking For Two, Blues For Free, Why Does The Room Begin To Sway 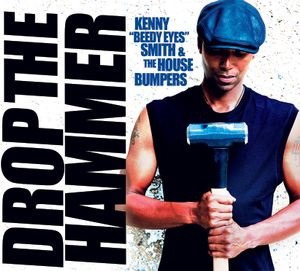 This disc mixes funk, soul and the blues in equal measure. Drop The Hammer isn’t as aggressive as the title suggests but there is plenty of swagger as it combines traditional and innovative sounds, focusing on contemporary subjects in a Chicago blues setting.

Smith is the son of Willy “Big Eyes” Smith, Muddy Waters’ long-time drummer, following his dad’s path behind the kit as he takes his blues to new and interesting places.  Kenny didn’t experience picking cotton in the fields but growing up in Chicago, his music reflects the rhythm of footsteps on jagged pavement and the soulful, shadowy noise of the Windy City at night.  A traditional blues number like No Need Brotha’ leads right into the hard funk of Puppet on A String, so you’re not left hanging on any particular street corner for too long. This feels familiar and fresh at the same time.

As a singer Kenny is average- not overly expressive but on key and he gets the message across.  The soul of Hammer revolves around the playing; no showing off by Smith or anyone as they each serve the songs and their sense of ‘feel’ is exquisite throughout.  That, alone, is worth the price of admission. 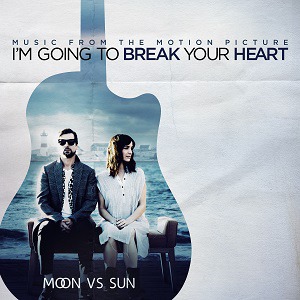 The soundtrack to the documentary about this Canadian music royalty couple.  5 years in the making, Moon Vs. Sun is the result of Raine and Chantal deciding to write and record together.  The results are as fulfilling and personal as one would hope.

Raine is best known for Our Lady Peace, Chantal  has had her share of hits, and they’ve both written big songs for people like Kelly Clarkson and Carrie Underwood.  Moon Vs Sun was released at the same time as the documentary, neither of which they told anyone about until the last moment. “This is such a personal project that we deliberately wanted to do as much of it ourselves and not have any outside forces influence it” Raine says.

Piano, acoustic guitar and voices lend themselves to telling intimate, personal stories.  Chantal and Raine are well aware of the risks they were taking by opening themselves as much as they have here. “Our relationship dynamic is a part of the music, you can’t have one without the other” Raine notes.  “I think we really surprised ourselves.”  Whatever it was about their relationship that made this happen now exists within the songs themselves, and now it’s up to us to figure out how the situations address our own lives.

Moon Vs. Sun is lush and emotional, about as far from dance floor jams and highway tunes as they can be for the most part- but sometimes that’s what we need.  The first single, Lowlight, is an exception and, like the first line says, “You said we’re too young for dying/ but we’re not kids anymore”.  It may not reflect the vibe of the whole record, but the attitude will speak to you loud and clear.  Now I need to see the documentary.

KEY CUTS:  I like It When You Make Me Beg, Lowlight, Under The Stars 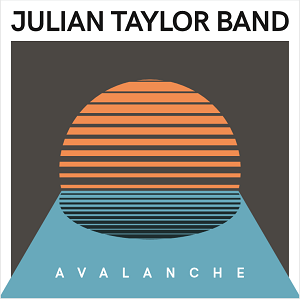 It’s the latest record from this Toronto band you’ve likely never heard of if you don’t live in the area.  Full of soul, slinky grooves and tight playing, Avalanche is lively.

The band’s sound is what Julian cheekily calls ‘premium vintage’.  Taylor has been on the scene a good long while- when he was young he had a major label deal and a hit, Staggered Crossing, in 2001.  His sound is R&B, but that doesn’t mean the same today as it used to- it’s more like the Al Green and Bill Withers days here.  “Authenticity is important to us” he says.  “We’re successful enough that we can earn a living- sometimes.  We’re not pigeonholed- to be able to write the things you really want to rather than having to worry about any kind of commercial success is great.”

Julian Taylor estimates that over 70 musicians have been in his band over the years, joking that if they held a barbeque for former members, “at which somebody rolled a grenade through the front door, you’d take out every rhythm section in Toronto.”  Previous albums have jumped effortlessly between modern pop and rock styles, but not this one; listening to any single track on Avalanche gives you a pretty good idea of what you’re in for.  It’s a rich, comforting listen that I definitely recommend. 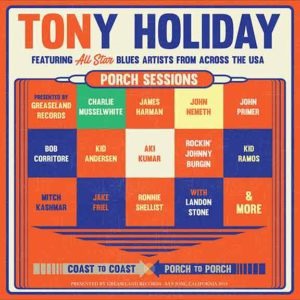 The new album from Tony Holiday, vocalist and harp player, is an exercise in time travel.  If you really love vintage blues, and I mean late 50’s/ early 60’s blues, Porch Sessions is aimed directly at your heart.

Playing 150-200 shows a year, in the spirit of the Alan Lomax field recordings Tony has been pausing along the way to complete his rather impressive Porch Sessions project. Holiday and his partner, Landon Stone, travelled coast to coast, recording some of America’s best blues musicians literally on their front porches.  The result is an album of deep, raw blues, stripped down to its front porch basics. It feels like a long lost Muddy Waters, Sonny Boy Williamson or John Lee Hooker album, like an unearthed treasure.

There’s nothing forced-sounding about Porch Sessions, just the relaxed feeling of music happening naturally.  It’s quite a guest list too; joining Tony and Landon are Charlie Musselwhite, James Harmon, John Nemeth, John Primer, Bob Corritore, Kid Andersen, Aki Kumar, Rockin’ Johnny Burgin, Kid Ramos, Mitch Kashmar, Jake Friel, Ronnie Shellist and more. This disc sounds as the name suggests it might; a bunch of guys just hangin’ out, maybe tossing back a couple of whiskeys before breaking out the guitars and harmonicas just to see what might happen.

Porch Sessions is not a slick studio recreation of what a front porch jam might be like, it’s the real deal.  The sound is lo-fi but authentic, devoid of overdubs or other studio trickery, and utterly magical in a high tech age.  Blues aficionados, this is for you.