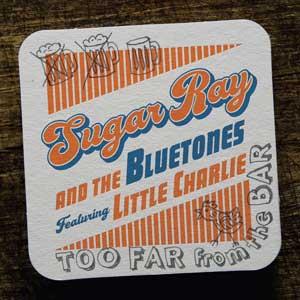 Some great blues based harp here from singer/ harp player Sugar Ray Norcia and his guys.  Too Far From The Bar is a swingin’ set of party blues, as the title suggests. Sweet playing, impeccable grooviosity and, sadly, one of the last recordings for guitarist Charlie Baty, who passed away unexpectedly this past spring. Still, it’s a joyous affair.

The core band for the Too Far From The Bar sessions was Charlie Baty on guitar, Sugar Ray Norcia on harp and vocals, Anthony Geraci on piano, Michael Ward on acoustic bass and Neil Gouvin on drums, with producer Duke Robillard playing guitar on 4 tracks as well.  Too Far From The Bar has a real vintage feel and blues sound, an easy swing that makes it so damned likeable, and that has a lot to do with Baty’s retro guitar tones.  “Little Charlie was so excited about this project and what a thrill it was to record together” Sugar Ray says.  “Charlie and I seem to be cut from the same cloth and musically we were like two peas in a pod.  On this recording we swing, we jump, and we get low down.  I’ll miss my brother in the blues, but his music will live forever.”

Too Far combines 9 originals with covers of tunes by The 5 Royales, Sonny Boy Williamson, Little Walter and Otis Spann.  Charlie, who wrote the liner notes, said “This historic CD features many original tunes and some spirited guitar exchanges between Duke Robillard and myself.” Duke is equally enthusiastic about the record, noting that “these guys were so hot on this session that they even set one of the multi-track tape machines on fire!”  The incident is commemorated with the instrumental cut Reel Burner which is also reprised at the end of the album in an alternate take.

This album wouldn’t be the goldmine that it is without the other musicians too.  The easy swing of drummer Neil Gouvin on drums and the walking bass lines of Michael Ward are a big part of the outcome, and I’m already an Anthony Geraci fan; he plays some great blues piano and I really enjoyed his Floyd Kramer-esque work on Too Little, Too Late.

I had high hopes going into this and was not disappointed. Too Far From The Bar is a ton of fun, powered by some truly great playing- enjoy.

KEY CUTS:  Too Little Too Late, Don’t Give No More Than You Can Take, Reel Burner 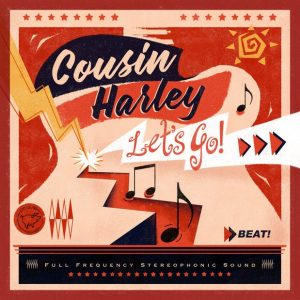 This is the 7th album for a trio of hillbilly rockers out of Vancouver dubbed “the Motorhead of rockabilly” by a delirious Dutch fan after a show in Holland.  Let’s Go is a parcel of seriously well played tunes and a bunch of fun.

Cousin Harley is multi-instrumentalist Paul Pigat and his musical cohorts Jesse Cahill and Keith Picot.   There’s nothing polite about their stripped down approach to rock & roll.  “Cousin Harley’s been my main project for 12 or 13 years now, and people think it’s easy to play rockabilly, but nothing could be farther from the truth” Paul says. “Everybody has to be on board from the first note or it just doesn’t work.”

Let’s Go was recorded at Afterlife Studios in Vancouver during the Spring of 2020, and no stinkin’ pandemic was going to stop them from finishing another world class record.  Plus, with the year it’s turned out to be, we could all do with some fun and lucky for us Cousin Harley is here to provide.  I love the uncluttered, crystal clear vintage sounding production with just the right amount of reverb on the guitars, with the bass and drums sounding like they’re over there in the corner.  This band can explode like a volcano, swing like Basie, and holler like a lonesome backwoods hillbilly, and the playing is so frigging tight I’m surprised this disc doesn’t squeak.

Of the rockabilly I’m familiar with, Cousin Harley feels like a mix of Reverend Horton Heat and early Stray Cats with a touch of Webb Wilder.  Let’s Go recalls a time when country and rock & roll were still kissing cousins, a mix of hayseed innocence and greaser cool with rock muscle that you wouldn’t think would mix well, but does.  This album is a total blast.

KEY CUTS:  Let’s Go, Right Back With The Blues, Merle The Gypsy 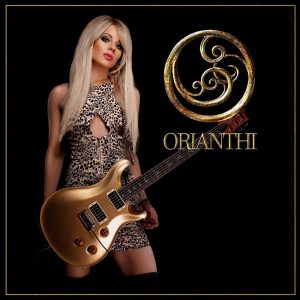 This is the 4th solo record (and first in six years) from the Australian singer/ guitarist, and it’s a scorcher.  I don’t know a lot about Orianthi, just that she played in Alice Cooper’s touring band from 2011 to 2014 and was the guitarist for Michael Jackson’s ill-fated “This Is It” thing.  O is gritty heaviosity and premium hard rock that’s going to be a real bugger to get out of my CD player. I’m liking this way more than expected.

O is melodic metal with a modern edge and some industrial textures.  Aside from Orinanthi on guitar and vocals she has the Swedish music mafia in her corner with Evan Frederiksen on drums and bass, and ridiculously famous songwriter/ producer Marti Frederiksen on percussion and programming.  My preference is for a more organic approach with real instruments and everyone playing at the same time- an old school rock & roll notion to be sure- but with Orianthi’s incredible guitar playing and expressive vocals, this particular combination is appealing too.  Plus, the production is just… so fucking good.  Maybe working with Alice Cooper gave her rock chops a boost and playing Michael Jackson’s stuff was a lesson in pop song craft and groove; just speculation, but you gotta admit it makes sense.

O is one of the most crushing albums of the year, but when Orinanthi is of a mind to turn in a passionate, heartbreaking ballad, she serves up the goods there too.  Try Crawling Out Of The Dark on for size- it’s an acoustic number about making your way out of an abusive relationship with an addict.  I have no idea if she drew on real life experience for it or not, but you can feel the truth of what she’s saying. Kudos for just using voice and guitar too, and what sounds like strings, making the emotional content so impactful. 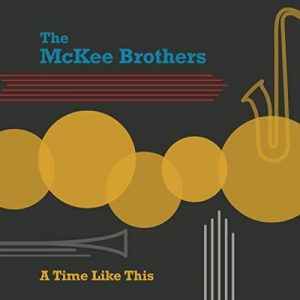 Smooth, articulate, and a master class in grooving- that’s The McKee Brothers’ 3rd album in a nutshell.  With an LA sort of jazz/pop feel that will remind you of some 80’s movie soundtracks, A Time Like This sounds like sunshine.

As with their previous two records, A Time Like This once again features fine LA and Michigan musicians and spotlights Denis McKee’s ongoing collaboration with songwriter/ piano player Bobby West, making for 16 lyrically original suavely funky tunes.   Having spent the bulk of the on-air part of my radio career deejaying through the 80’s, these songs feel warmly familiar and comfortable, quite relatable to many of the pop records (yes, actual records) that I used to play on the air way back when.

Too many musicians involved to list here (13), but Denis sings, plays guitar, bass and keys, and blues great Larry McCray  plays guitar on a couple of tracks.  The horn parts were arranged by Lee Thornburg, who plays all the horns too, giving the songs bright bursts of energy.  A Time Like This is a rather sophisticated blend of horn-driven blues, soul, gospel and rock & roll, perhaps what the 70’s band Lighthouse (remember them?) might have sounded like if they were from California instead of Ontario.

Denis McKee moved from Lansing, Michigan to LA in 1988 to attend the acclaimed Dick Grove School of Music, and no doubt he made many friends on the LA session scene because A Time Like This is full of incredible playing.  Combine that masterful, nuanced musicianship with some truly fine song writing and you’ve got an album that just makes you feel good; not a bad thing to have happen in 2020.  It was produced by Denis who knew exactly what he wanted from the tunes and players… I can’t imagine this album turning out any sweeter than it has.

KEY CUTS:  The Rain, How Can I Miss You Baby, Back To Love 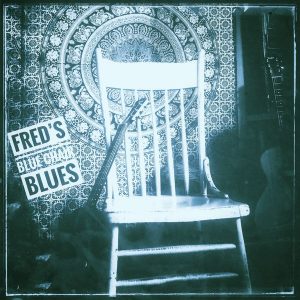 This is as basic and raw as it comes.  Fred’s Blue Chair Blues is what he refers to as “living room blues”; stripped down, unplugged, rough cut and recorded at home, just Hostetler’s voice and his guitar.  It’s an intimate and bracing blues experience.

Even if Hostetler’s name isn’t immediately familiar to you, he’s been around.  He’s worked with major artists like Johnny Winter, Graham Parker, The Knack, Billy Squire and Jeff Beck, as well as Grammy winning producer Jack Douglas.  Blue Chair Blues is mostly original tunes, although he opens with a convincing version of Jimmy Reed’s Bright Lights Big City. This disc recalls the work of folks like Bob Margolin who, in the last couple of years, has released similarly stark albums like This Guitar and Tonight. The title of this disc comes from the chair in Fred’s living room, where these songs were initially recorded and filmed for the Facebook page/ group Can’t Stop The Blues, and Fred says it’s still available there to view.

“I find it intimate and refreshing to see artists performing in their kitchen, barn, patio, bedroom et cetera” Hostetler says. “I never thought much more (about the video) until one September night when a voice woke me up with the words release your living room recordings as an album. My first thought after sitting up in bed was ‘but they’re not good enough… they’re not perfect.’ Then the thought came back what does it matter… let the audience decide.”

In music, as in so many areas of life, great things can manifest when you’re not paying particular attention, when you just let things happen as they will.  That’s the case with Fred’s Blue Chair Blues, something that may not have happened (at least not this well) if Fred had been sweating to put out a perfect record.  Blue Chair is just the sound of a guy with his guitar making the music he loves.  Sonically it’s not the best sounding thing I’ve heard- more like a good quality bootleg- but in terms of heart, honesty and passion it’s a home run.