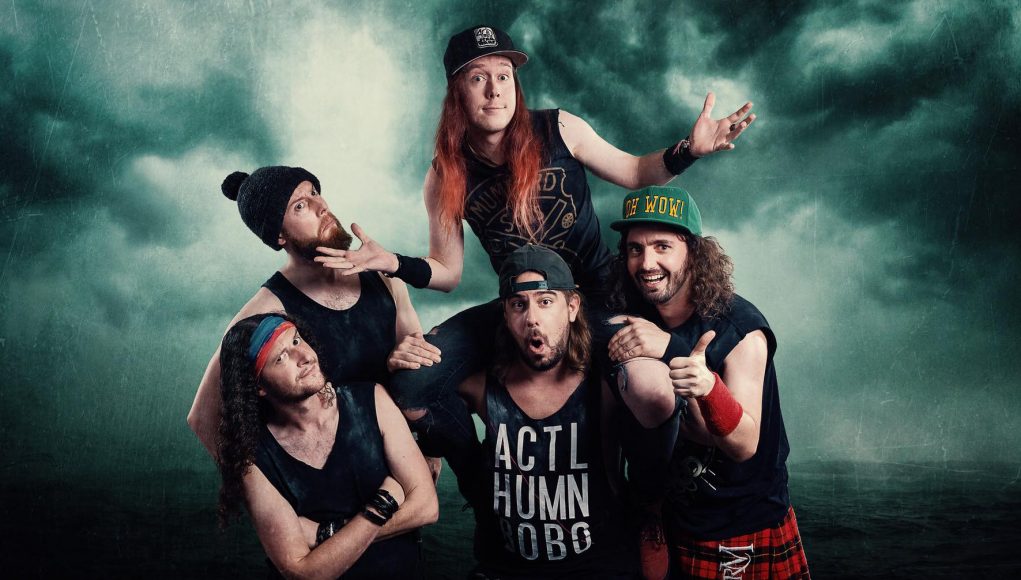 As far as Christopher Bowes and his band Alestorm are concerned, too much heavy metal music is focused on being dark, sinister and gloomy.

For Bowes and his bandmates in Alestorm, having fun, not taking themselves too seriously and partying with their diehard fans is what makes playing their version of “heavy metal pirate music” such a hoot.

Alestorm’s songs about drinking copious amounts of beer and rum, leading a pirate’s life on the open seas, walking the plank and videos featuring left handed midget mandolin players, raucous parties on the high seas and lyrics sure to garner laughs has brought them plenty of accolades and a solid fan base across North America, Europe and around the world.

Alestorm will be the headline act at a metal show set for the Rutland Centennial Hall on Friday, Nov. 15. They will be joined by Aephanemer, Nomad and Traceless Dimensions in a show promoted by West Metal Entertainment.

Bowes was one of the founding members of a band called Battleheart in his native Scotland. What was originally intended to be a standard power metal band changed in a hurry after Bowes wrote a song called Heavy Metal Pirates and convinced his bandmates to permanently adopt a “pirate theme” and incorporate folk metal elements into their sound.

Instruments heard on record and played live in concert include electric mandolin, violins and banjos, as well as Bowes on electric keyboards- not your typical heavy metal instrumentation lineup.
Bowes and his friend Gavin Harper formed Battleheart and released two independent demos in 2006, which were well received in Scotland and the United Kingdom, so they began to perform live later that year.

The band changed their name to Alestorm in 2007 after being offered a record deal by Napalm Records and their debut album, Captain Morgan’s Revenge, was released in 2008.

Alestorm has released several pirate-themed metal albums since then, including their fourth record called Sunset on the Golden Age in 2014, which reached No. 1 in the U.K.’s rock chart.
In a phone interview from his rural Tennessee home – he moved to the United States from Scotland four years ago – Bowes said he and his bandmates are looking forward to another international tour in the coming weeks and months.

Bowes said he was “a dork who grew up playing piano and all these boring classical pieces … and then got roped into playing drums in high school.”

He was the only kid in his high school with a drum kit so a lot of his friends wanted him to join their band.

“I first started playing drums in this shitty little metal band and it just sort of spiraled out of control from there,” he said. “I really didn’t like playing drums because I have a very musical mind and you can’t really write songs in a high school band as a drummer.

“I was a classically-trained piano player, but I really didn’t think there were any keyboards in metal until I discovered all these European power metal bands and symphonic black metals bands and discovered these great bands had keyboard players. So I decided to drop the drums, get back to keyboards and start my own band. We formed Battleheart, which became Alestorm and the rest is some sort of history as they say.”

Bowes admits he has no time for metal bands that work so hard to promote an image and that is dark, sinister, gloomy and far too serious.

“I hate all of those bands that are all super serious about their image,” he said. “We’re just a bunch of idiots looking to have some fun. The first time we ever toured, we had a manager tell us we had to be mysterious and you can’t go and talk to your fans. I said f…. that. I want to go and say hello to people.

“We’re very much ourselves at all times. We don’t pretend to be other people on stage. We’re just very casual and playful. We decided to write a lot of songs about pirates and piracy … and not take things too serious. You have to write about something and I wanted nothing to do with writing about darkness and Satan.”

Alestorm has toured in Canada on numerous occasions over the past decade, but will be their most extensive tour yet.

The “Oh Wow Canada” tour began Nov. 1 in Quebec City and takes the band to Halifax, Moncton, Montreal, Ottawa, Toronto, London, Winnipeg, Saskatoon, Edmonton and Calgary before the Nov. 15 gig in Rutland. They will finish the tour with shows in Vancouver on Nov. 16 and Victoria on Nov. 17.

Alestorm has a much more loyal following in Canada than they do south of the border, said Bowes.

“We’re doing a proper Canadian tour in all these towns most of the guys in the band have never heard of,” he said. “Canada has always been very good to our band. We’re not overly popularly in the United States and I think Canadians tend to like European metal bands for whatever reason.

“Everybody seems to like us a lot more in Canada than they do in the U.S. It feels a lot like the reaction we get across Europe every time we return to Canada.”

With metal getting very little airplay, the only way to survive is to play a lot of shows and garner a reputation as being a great live band, said Bowes.

“More than a lot of our competition, we’re really a live band as we don’t sell a lot of albums,” he said. “People sure as hell like coming to our shows and they always have a great time. I think our live reputation as a great live band is what keeps us going.”
Many of the band’s best songs “are drunken singalongs” and the constant call and response between the band and audience makes for a great night of revelry and fun, he said.

“We like to write catchy songs that are a lot of fun and if you don’t know all the words, you will know the main chorus before the song is over,” he said. “There’s a great interaction between the band and our fans. We sort of encourage our audience to have a few drinks as you tend to lighten up after a couple of beers and everyone has a great time. It’s really light-hearted. There’s a lot of singalongs, crowd surfing and good times.”

For tickets to the show, visit www.eventbrite.ca.