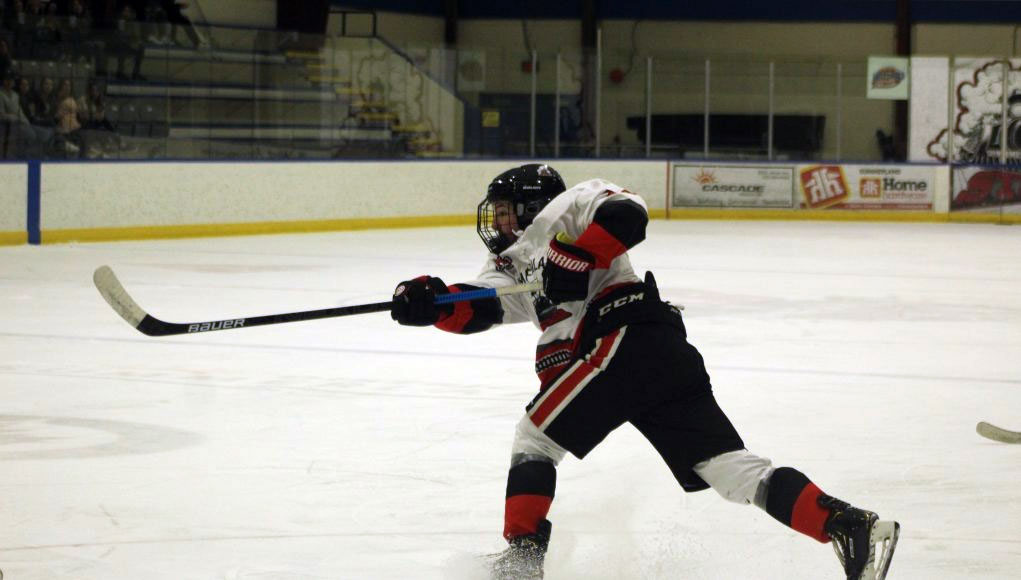 Matthew Byrne: Pentictonite loving his time with the Summerland Steam

Matthew Byrne has experienced what his Summerland Steam head coach Ken Karpuk calls the “ugly side” of the hockey business.

After beginning his junior career with his hometown Penticton Vees in the B.C. Hockey League, Byrne was dealt to the Powell River Kings after 25 games. He played 34 games on the Sunshine Coast between last year and early this season before being moved again, this time to the Drayton Valley Thunder of the Alberta Junior Hockey League. He played 22 games there, before leaving. Prior to the Christmas break, he played another game with the Vees, but joined the Steam in the Kootenay International Junior Hockey League (KIJHL) in early December.

When talking about the changes he’s experienced, the 19-year-old is nothing but positive.

“It’s definitely good because every coach has a different way of coaching,” says Byrne. “You learn different systems and you learn they have different skill practices. I have learned a lot from every team I have been to.”

Playing for the Vees is something he described as a “cool environment.” He knew many people and enjoyed playing in front of them.

“It was definitely nervous at the beginning. I was watching them the whole time growing up,” he explains. “It was so surreal going out there for the first game.”

Pulling that Vees jersey over his head was a cool feeling.

“It was a very good time,” he says. “I was excited for the first game for sure. It just got more normal as the season went on.”

This season he’s had his best time playing with the Steam.

He’s loved having his family watch more of his games as well. While in Powell River, they managed to see a couple.

Karpuk, who played 12 years of professional hockey in Europe and coached three years in the Western Professional Hockey League, has known Byrne dating back to his coaching coordinator days with the Penticton Minor Hockey Association. They first met as Byrne was among the players doing a drill called shooters and scorers.

“Always could score,” says Karpuk. “We were really fortunate to be able to get him. A guy that can score. He’s just money in between the dots, below the tops of the circle. For a guy that you can bring into your program that doesn’t cost you anything, that’s gold.”

In 20 regular season games with the Steam, Byrne, listed at five-foot-nine, 181 pounds on eliteprospects.com, collected 18 goals and 26 points.

Along with possessing threatening offensive abilities, Karpuk describes the Okanagan Hockey Academy alum as a good, team guy everyone likes.

Byrne has enjoyed a good run with Morey Babakaiff and Liam McLaren, but Karpuk recently changed the line. In an 11-2 win over the Osoyoos Coyotes on Feb. 19, Byrne lined up with captain Cody Swan and netted a hat-trick.

As the KIJHL playoffs began on Feb. 29, Byrne’s goal is simply to help the Steam go on a deep playoff run.

Byrne has thought about returning to junior A, but his ultimate goal is to play at the college level.

Karpuk believes Byrne has the skill to play at that level, but needs to find the right situation. He talked about being in an environment where the coach gives the faith “to be the guy.”

“At this level he is going to play a lot,” says Karpuk. “He is such a good kid. He works hard. His game is with the puck.”