Home Charities & Fundraisers Major telethon, concert and fundraiser planned to help the BC fire and... 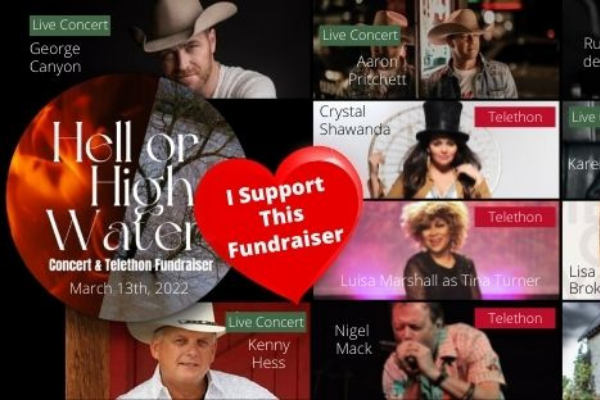 Major telethon, concert and fundraiser planned to help the BC fire and flood victims

Communities throughout British Columbia, Canada have suffered devastating losses in
2021 due to wildfires and floods.

The “Hell or High Water” live music concert and virtual live streaming telethon is scheduled to take place on March 13, 2022 from 10 a.m. to 10 p.m.

Both events will feature musical headliners, celebrity guests, Federal and regional dignitaries, Indigenous artists and many others. Leading up to the fundraiser will be a line up of “Donation by Contest” prizing opportunities like signed guitars by musicians, tickets to major events, holiday vacations, art and more.

Proceeds collected, including those made online and through the telethon portion of the event, will go directly to Rotary Merritt who will then work with Rotaries throughout the affected areas to disperse the funds to communities and individuals affected by the natural disasters. Sponsorship of the Live Concert may be partially used to support the event with the rest going directly to Rotary Merritt for dispersal to those in need.

A website www.hellorhighwater.ca has been created to collect donations to support the fundraiser and you can follow the conversation at #hellorhighwaterbc on selected social media channels.