One hundred years ago today – December 6th, 1917 – is a day that will continue to live on in history as a sad day in Halifax, Nova Scotia. The French cargo ship SS Mont-Blanc, heavily laden with explosives meant for use across the Atlantic, collided with the Norweigan steamboat SS Imo in the narrows between Dartmouth and Halifax. The collision caused a fire onboard the Mont-Blanc, which set off a chain reaction and twenty minutes later a massive explosion, killing nearly 2000 people and injuring an estimated 9000 people. 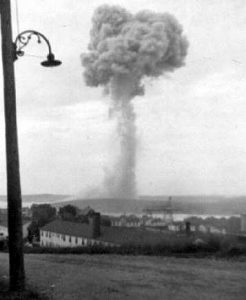 The blast radius was massive, flattening most structures within a half-mile of the detonation. It was the largest human-made explosion on record until the invention of nuclear warheads came along later in the 1940s. The energy released from the ignition was equivalent to 2.9 kilotonnes of TNT and caused an immediate tsunami.

Now, a century later the West Chezzetcook native Joshua Smith has released a recount of the tale of the Halifax Explosion. The EP entitled The Halifax Explosion is a three-song piece that tells a little of the history and is told by a fictional character watching the events unfold from Citadel Hill.

“I started writing the middle song Citadel Hill on the train coming into Halifax and saw Citadel as I rolled in. Later I climbed to the top of Citadel Hill and saw the entire city present day, and finished writing the song there.” -Joshua Smith

The story is a close one for Smith, as he grew up in West Chezzetcook (approximately 40 kms from Halifax) and he has many family members that were lost in the blast. He has crafted a beautiful piece of art and has retold very important part of Canada’s history.

Joshua Smith is a Kelowna-based folk musician who has been involved in many projects. There are no bounds for Joshua, as he has performed in folk groups, funk groups, and rock groups, and has produced many albums locally – including Tiger Moon’s recent release Cariboo & Whiskey. Joshua tours solo often and will be announcing show dates in 2018. His music can be found here.

You can download the EP via Joshua’s Bandcamp Page here, at a name-your-price rate.Yyou can also stream the album on his YouTube Channel.

CBC Halifax recently debuted the first tune he released, which is streamable here.