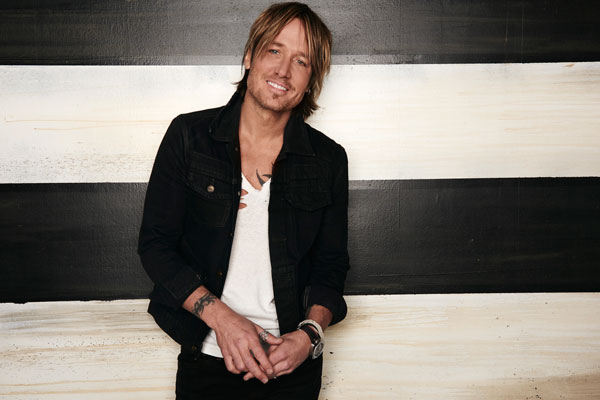 Keith Urban has long been hailed as one of the industry’s best live performers who has
always given his fans, old and new alike, electrifying and unpredictable shows with
eye-popping production and a set list that is saturated with many of his 20 #1 songs.
Electrifying and emotional, fast-paced and unpredictable, Urban’s concerts are an
explosive experience, a roller coaster ride that numerous critics have called “concer
events not to be missed.”
‘ripCORD World Tour 2016’ with Dallas Smith and special guest Maren Morris, will
debut on September 10th, in Vancouver, BC, kicking off the arena leg of the world tour.
Some key highlights of this Grammy Award winner’s Canadian tour include first time
performances in Kelowna and Prince George, as well as opening the brand new Rogers
Place in Edmonton.
“Our Canadian shows have always been off the hook giant parties,” said Urban. “From
the very first shows I ever did, there was a synergy with the audience that’s only grown
stronger over the years. I can’t wait to bring the “ripCORD World Tour” to everyone
this year.
The ‘ripCORD World Tour 2016’ will now visit three countries, the United States,
Canada and Australia. Ripcord, the album will be available beginning Friday, May 6th.
Sunday, September 11th
Prospera Place, Kelowna, BC
Doors 6:30pm Show 7:30pm
Tickets $99.50 – $149.50 (plus applicable services charges)
Tickets available at www.selectyourtickets.com or call 1-250-762-5050

About Dallas Smith:
Smith has amassed international appeal since making his debut with Jumped Right In, a
project that netted a GOLD single, 5 CCMA Award nominations and a JUNO Award nomination
for Country Album of the Year. He followed with the infectious Platinum-selling single “Tippin’
Point” and dominated the Canadian Country charts with songs like “Lifted” and multi-week #1
hit “Wastin’ Gas.” The Vancouver, British Columbia native is the only Canadian male country
artist to spend multiple weeks at the top of the Country Airplay Chart in the Nielsen BDS era
for single “Wastin’ Gas.” He also won the 2015 JUNO Award for Country Album of the Year
(LIFTED), and the CCMA Award for Album of the Year (LIFTED). He was the #1 Mediabase and
BDS most played Canadian on country radio in Canada for 2015 and the #1 Canadian country
artist on the BDS Top 50 All Format Artists chart for 2015. He had 3 singles in the BDS Top 25
Canadian Country Songs chart for 2015 (Wastin’Gas, Lifted and Cheap Seats) and 2 singles in
the Mediabase ‘2015 Country Chart’ (Top 50 overall, includes international) (Wastin’ Gas and
Lifted)

About Maren Morris:
25 year-old Columbia Nashville singer/songwriter Maren Morris has quickly established herself
in Nashville’s music community with songwriting and vocal styling’s that reflect her country,
folk and pop influences, with Rolling Stone Country touting her “a stellar solo artist in her own
right.” Songs from her self-titled EP, have been critically received and just two weeks after its
release surpassed 5.5 million streams, with 3 songs hitting Spotify’s US and Global “Viral 50”
chart, zipping to #1 on Billboard’s Heat Seeker Album Chart. The Texas native was named one
of CMT’s Next Women of Country, a VEVO Discover Artist, a SiriusXM “Artist To Watch in 2016,”
and one of Rolling Stone Country’s “10 New Country Artists You Need To Know.”
For more official Keith Urban news and information go to www.keithurban.net or follow him
on www.facebook.com/keithurban or @keithurban.

Symphony Matters: OSO presents music worth shovelling your driveway for!