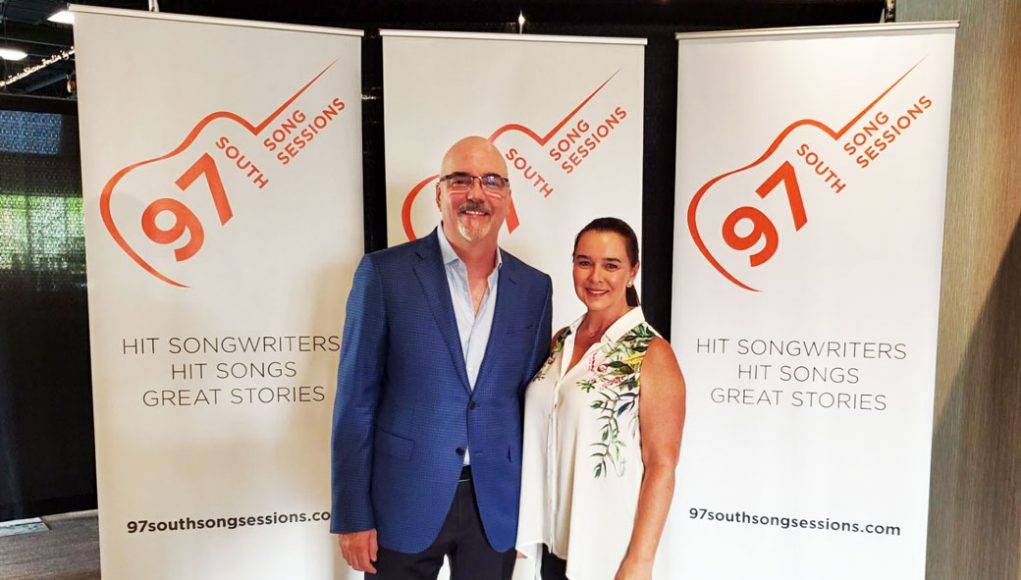 Veteran Canadian Music Producer Robert Ott and his wife Robin are the co-founders of the 97 South Song Sessions singer/songwriter music festival, which took over the East Ballroom at the Penticton Lakeside Resort and Conference Centre and Penticton Trade and Convention Centre this weekend. Several of Canada’s top songwriters will perform and discuss their music careers and the process they use to write songs during the event.

Get tickets for performances at both venues July 24, 2021 at www.97southsongsessions.com. 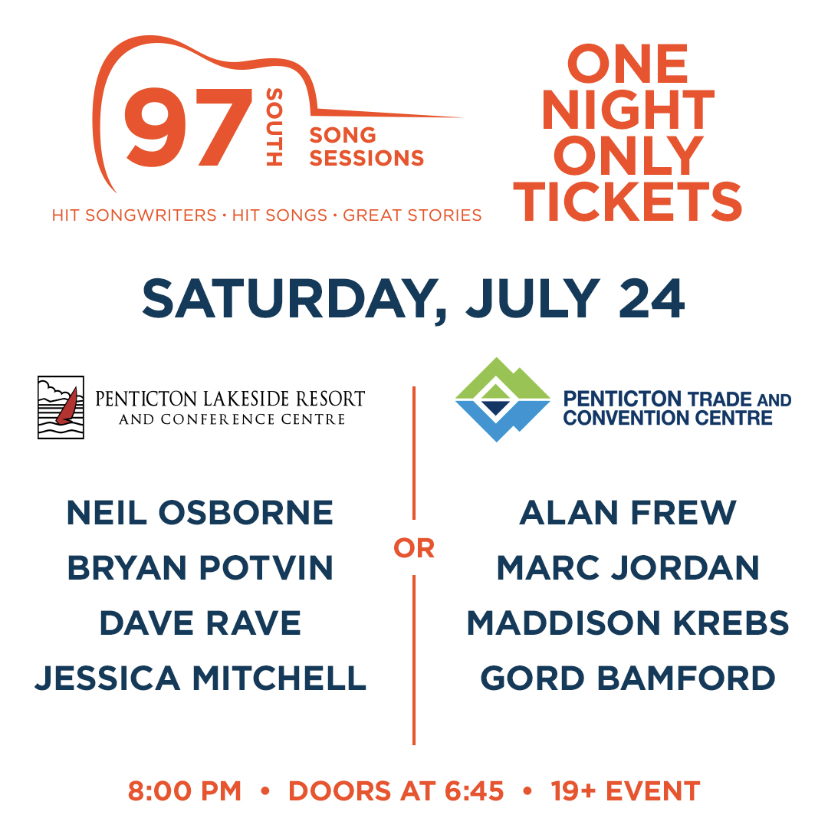 Not being able to attend live music concerts – or organize them – during the worldwide pandemic was difficult for Robert Ott.

That’s why the lifelong music producer was happy and relieved on opening night of the 3rd annual 97 South Song Sessions event in Penticton, July 23.

A couple hundred aspiring musicians, songwriters and music fans gathered to listen to renowned Canadians songwriters, such as:

“97 South Song Sessions is about bringing together some of Canada’s finest songwriters to perform and share tales of their creative journey that inspired their hit songs,” said Ott, who has been a career music producer for more than 35 years.

“The result is an intimate show that is touching, humorous, personal and guaranteed to make people smile, tap their feet, meet other music lovers and, generally, have a wonderful time.”

“Both venues adhered to COVID-19 etiquette, where participants and fans were asked to adhere to health and safety and social distancing recommendations of the provincial government,” added Ott.

Ott and his wife Robin are the co-founders of the songwriting festival, which was cancelled last year due to the pandemic. They spend most of their time in Toronto, but purchased a residence in Penticton a decade ago and wanted to bring their love of live music to local music fans.

“We wanted to bring something to the valley that has been an important part of our lives for a long time,” he explains. “One night we asked each other what do we do at night, and we thought, why don’t we bring a show to the valley that accords with our great experience?”

That idea of hosting a “songwriting circle,” which has been popular at music festivals for decades, came to mind and the concept for 97 South Song Sessions was born.

Ott has worked with songwriters his entire career in the music business, so songwriters festival made perfect sense. Now, the 97 South Song Sessions celebrates its third year.

“The idea is for a variety of songwriters to get on stage together, play their songs, and tell stories of how their songs were written and came to be,” explained Ott. “They speak about their music careers, play a few tunes, and the show moves on down to the next person, who tells different stories and plays different songs.”

“The combination of people you’ll see on this stage this weekend will likely never be on the same stage again,” he said. “To have artists from pop, rock, country and folk is exciting and interesting. We bring artists together who are eclectic. A fantastic experiment, surprising and emotional. You never know what you’ll get, which makes it exciting.” 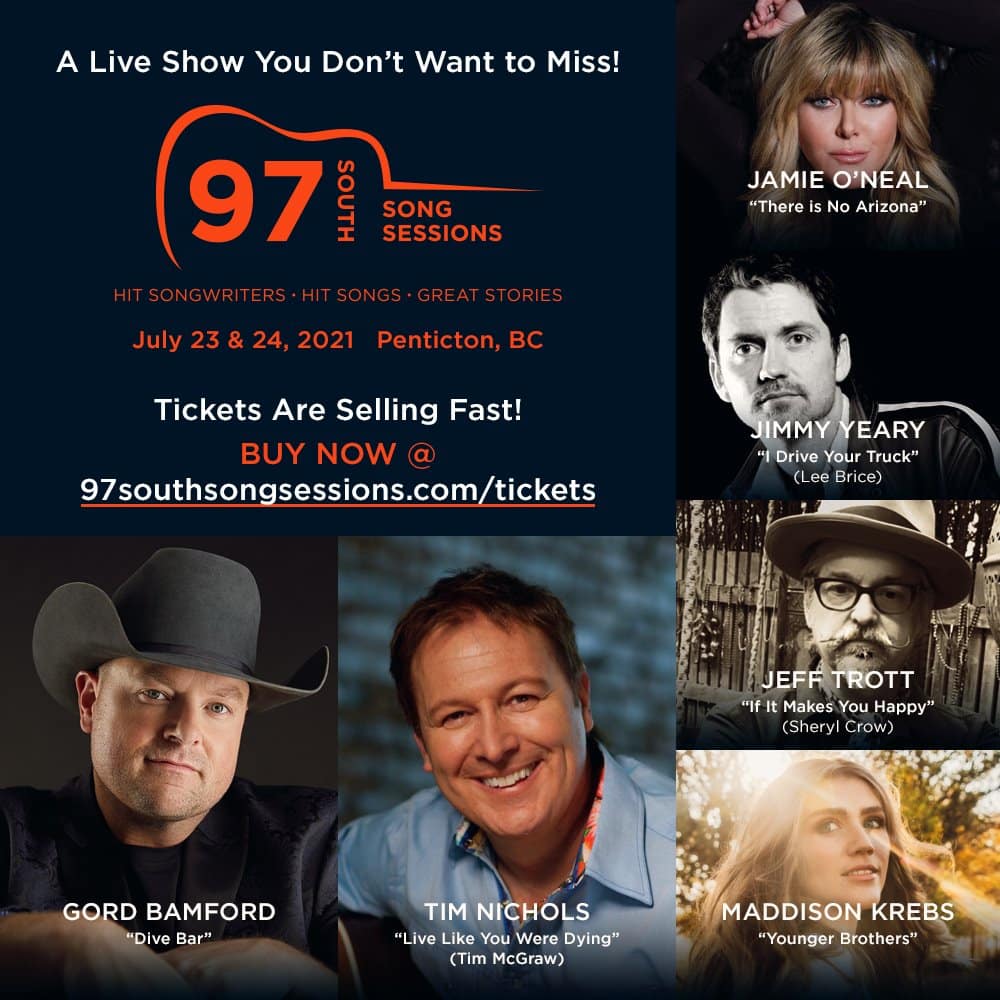 “Another highlight of the event is bringing together music fans from across the Okanagan valley, British Columbia, and other long distances to share their love of music,” he said.

“We get such an interesting mix of people and all age groups … younger folks, older folks – who doesn’t love music?”=

“The last 18 months of the pandemic has been hard on people, and we can lean on music for many reasons: to get through tough times, to relate to other people, or to just have fun. Music truly is the universal language and that’s what this celebration is all about.”

Most of the artists signed to perform this weekend are contacts he’s made in the Canadian music industry over the past three-plus decades.

“I’ve worked with almost all of them – I know their art, I know them personally, and I felt they would fit together well to create a great show for the audience,” Ott said.

“This year they tried a plague, fires and recession to try and stop us,” he added with a laugh. “But we prevailed and we’re already planning for next year, hopefully under less adverse conditions.”

Any music fan wishing to attend Saturday night’s event and concert at the Lakeside Resort and Conference Centre or Penticton Trade and Convention Centre can purchase tickets online at www.97southsongsessions.com. Most participants have purchased weekend passes, however, single day tickets will be available for Saturday’s performances.

Ott plans on making 97 South Song Sessions an annual event for many years to come.

Here’s a few photos of the event!