An interview with Masters of the Universe: Relevation filmmaker Kevin Smith

Kevin Smith became a filmmaker and sometimes actor when he wrote and directed Clerks in 1994. Smith played Silent Bob in his own movies and occasionally acted in other movies. He still makes movies but has added many other roles to his plate. He runs a podcast empire, still gives public Q&As, directs episodes of television and now created Netflix’s new Masters of the Universe: Revelation series.

Masters of the Universe: Revelation tells all new stories about He-Man, Skeletor, Teela, Man-at-Arms, Orko, Evil-Lyn and the whole gang. Smith spoke about the new show in a Zoom roundtable with reporters.

Masters of the Universe: Revelation premieres Friday, July 23 on Netflix.

Q: How did you balance your nostalgia for Masters of the Universe with doing something new?

Kevin Smith: For us, the job was nostalgia. The job was you are making a show that is fan service for anybody who grew up watching that cartoon. They’re doing a Masters of the Universe movie and they’re doing another cartoon called He-Man and the Masters of the Universe which is more kid oriented. It’s a beautiful show, it’s in CG and stuff. But they were like, “We want something for the kids who grew up watching that incarnation and we want to deliver that incarnation to them.”

Essentially I was tasked with do a spiritual sequel. Essentially do the next episode of the show as if everything went wrong. That was our manifest was the built in audience, people my age at this point, 40, 50 who grew up watching that show. We baked in something that’s definitely fan oriented but I feel like you can kind of come into it if you don’t know the world that well. We did our expository moments and stuff like that. So we felt like go for the base if you will, the kids who grew up watching the show who are now adults and figuring that they probably will bring their kids with them.

We had to make it tolerable for kids who didn’t grow up with this, but when I saw Raiders of the Lost Ark with my father when it first came out, I got to see who he really was. He was beside himself. He was like, “Oh my God, this is the kind of movie that I would go to every weekend as a kid. They called them cliffhangers and then you’d have to go back the next week and you didn’t know if they were going to live or die. He’s like I can’t believe they’re doing this. This is amazing.” That was the most animated I’d ever seen him in my life and it was because of art. I want that moment for everybody who sits down with their kids to watch this. I want their kids to be able to see a version of their parents that they’ve never seen before, the child that lives in that parent’s heart. 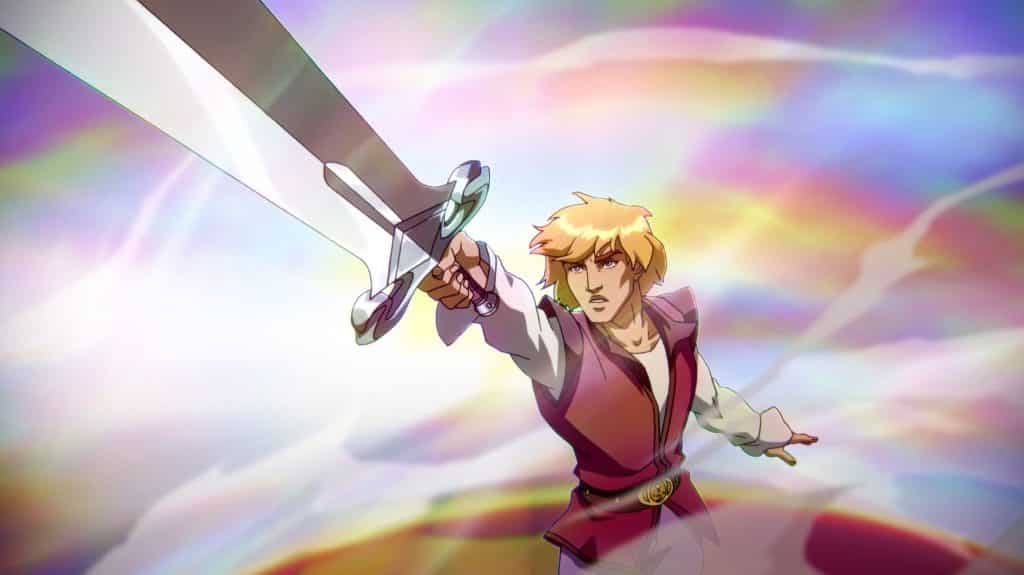 Q: Do you enjoy working in the animated medium?

KS: We did cartoons a long time ago. We did the Clerks cartoon. They cancelled it after two episodes and we only made six. We did Jay and Silent Bob’s Super Groovy Cartoon Movie a couple years ago and stuff, so it’s always been there, SModimations. I’ve always loved animation but doing this, heading into a world where you get to play with other characters, somebody else’s IP and you also work with an incredibly accomplished house of animators like Powerhouse Animation, kids that I’ve known going way back to Dogma.

It’s kind of like doing a comic book. You write a script and once your work is done, it just pays dividends for months if not years because what happens is in a couple weeks, you get something to look at based on that script. You get some designs, you get some drawings and then a week later, you’re recording voices. And then a week after that, you’re seeing the animatics. Then a week after that, you’re seeing an animation complete. It always gives. Normally when you do a movie, once the movie’s done, you’re done. Here, once my job is done, writing-wise, it kept delivering.

Visuals are my weakest arrow in my quiver as a filmmaker. You ask anybody, they’ll tell you. The idea of working with people who I don’t have to worry about what it’s going to look like because they’re going to make it look amazing is incredibly freeing. Suddenly you’re like it’s no longer an army of one. You’ve got all these other people who are going to take it in the direction you can. Pat [Stannard] and Adam [Conarroe], our two directors at Powerhouse, this is the first time they’ve gotten the big job where they’ve gotten to direct. They’ve worked on other stuff but they got to direct these episodes and stuff.

Talking about two insanely talented kids who like every action sequence you see is really laid right at their feet. We would be writing action and Pat and Adam would be like, “Just write fighty fighty and we’ll take care of the rest. Look, you’ve got them all talking and that’s great but this is animation and you need big action sequences and that’s where we excel.” So I was never alone.

Q: Do you think fan culture will ever get to the point where they accept new takes on classic franchises without getting toxic?

KS: I definitely believe so. Even at the heart of toxic fandom is fandom. It basically starts from somebody who loves something more than other people do. They see it, understand it, relate to it in a way that others can’t. It doesn’t mean they’re right and the world’s wrong but it becomes important to them, beyond just a simple entertainment.

Kids, toxic fandom has existed since I was a child. This is nothing new. I would go to San Diego Comic-Con in 1995 and be standing around with people who are like, ‘Look at those f***ing Star Trek people’ and they were dressed like Wookies saying this about others. In any culture, any tribal culture, anyplace people build their own families, it’s acceptance for those who love exactly as you love and it’s suspicion for those who are outside of that. We see it in sports all the time. Sports fans are way more toxic than comic book fans, pop culture fans and stuff like that.

Twitter is that place where people like bitch, bitch, bitch, bitch. For me, I’m not saying I’m better than that, but I don’t need to add more negativity to the discourse. So in talking about pop culture as I get to every week now on Fatman Beyond, but I’ve been doing it since I was a kid. Now, I will extoll the virtues of that which I love until you’re irritated by it or until you give it a try but you’ll never hear about the sh*t I don’t like because why bother? Why waste the time. There’s a filmmaker, mediamaker, TV maker, a writer, an actor, somebody behind these things that you dismiss as oh, that sucked, kind of diminish it in one word after they spent years of their life making a thing and I’ve been at the receiving end of that, so naturally it’s very easy to come to a position where I’m like you know, I don’t want to hear negative sh*t about myself so why am I saying negative sh*t about anything else?

So the change begins with each person. I’m not going to say one day everybody’s going to come to and be like hey, we’ll be a happy family if we just stop fighting about which one is the best Spider-Man. But a little more patience everybody needs to have with each other out in that world. I’m certainly not out here saying sexist or racist benefit of the doubt. I’m talking about real fandom. I’m not talking about people that get online just to sh*t stir to watch somebody’s reaction change. I’m talking about a person that’s just like you, that sits down, watches that thing and consumes it. It means something to them, so much so that they build the rest of their life around all right, next episode’s here, next  thing is here. I want to collect this thing, I’m going to buy this thing.

These are the things that keep us going in life in terms of the things that help us identify who we are and be like I’m a person that likes this. Then you meet a bunch of other cats who are like online who are like I like that thing too. I just wish it was always pleasant but to be fair, like I said, it’s never always been pleasant. It sounds corny to say but you’ve just got to be the change you want to see. If you don’t want to see that kind of sh*t out in the world then you can’t be the kind of person that puts that kind of sh*t out in the world. That’s kind of why I became more of a cheerleader guy than let me tell you what sucks, as if I’m the arbiter of cool. Also kids, that sh*t goes away the older you get. People stop caring about what you think and also what you find cool.