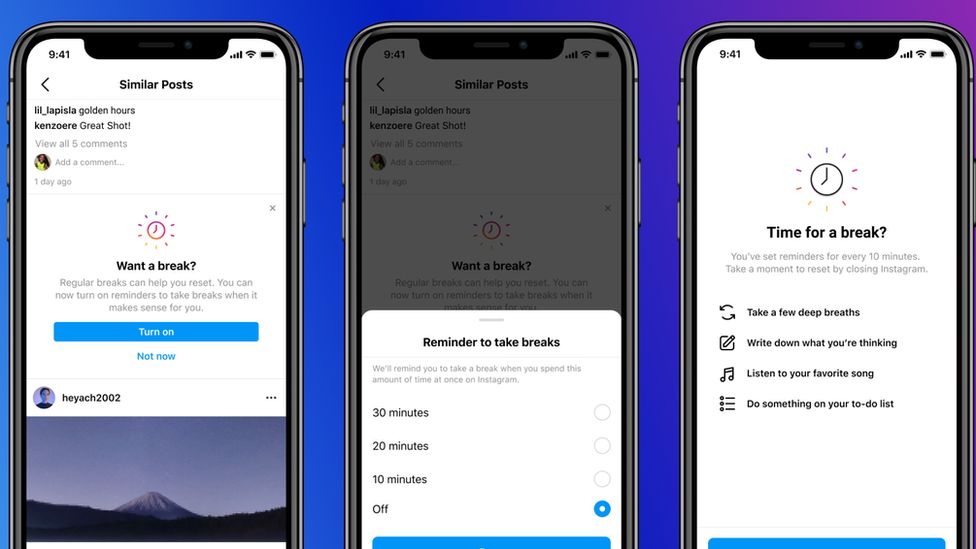 Instagram recently announced a new feature that will apparently help users manage their time spent in-app. As the chief of the major social media network said in a new blog, parents will be able to see how much time their kids spend in-app and set time limits, while teenagers will get reminders to take a break.

For those of you who don’t know, Instagram has been under increasing pressure over the use of the platform, especially by teens, over the past couple of months. Some research showed that teens blamed the network for increased anxiety.

Instagram’s chief Adam Mosseri is due to meet with US Senate politicians this week, and critics say that the timing of this new feature is “interesting,” considering the pressure the social network has had over the past few months.

Messari tweeted about the feature last month and now announced the “take-a-break” officially. He said that it will be launched this week in the Canada, United States, the UK, Ireland, Australia, and New Zealand.

“If someone has been scrolling for a certain amount of time, we’ll ask them to take a break from Instagram and suggest that they set reminders to take more breaks in the future,” Mosseri wrote in the blog.

There will also be notifications to turn on break reminders, and a new tool for parents (coming in March 2022), which Mossari announced, so that parents can see how much time their children are spending on Instagram, and set time limits accordingly.

Time limits already exist on Instagram – if you want to set a time limit per day and receive a notification when you have scrolled too much and the limit is hit, you can go to Settings > Your Activity > Time > Set Daily Limit.

“While available to everyone, I think this tool is particularly important for teens to more fully understand what information they’ve shared on Instagram, what is visible to others, and to have an easier way to manage their digital footprint,” the Instagram continued, finalizing the blog by saying that he welcomes productive collaboration with lawmakers and policymakers in the shared goal of “creating an online world that benefits and protects many generations to come.”