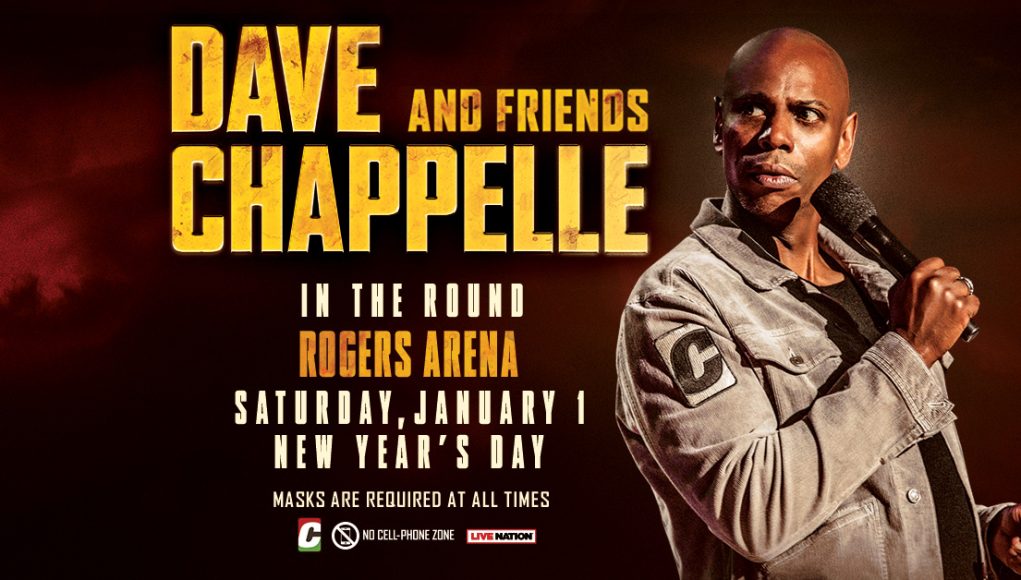 Performed in the round, Dave Chappelle and friends will bring a special New Year’s Day stand up comedy show to Vancouver.
WHEN & WHERE: Saturday, Jan. 1 at Rogers Arena in Vancouver, BC
TICKETS: Tickets go on sale starting Monday, Dec. 13 at 10 a.m. on Ticketmaster.com.
NOTE
No cellphones, cameras or recording devices will be allowed at this show. Upon arrival, all phones and smart watches will be secured in Yondr pouches that will be unlocked at the end of the show. Guests maintain possession of their phones throughout the night, and if needed, may access their phones at designated Yondr unlocking stations in the lobby. Anyone caught with a cellphone in the venue will be immediately ejected. We appreciate your cooperation in creating a phone-free viewing experience.
DISCLAIMER
Pilot Boy Productions, Inc. and/or Dave Chappelle own all rights in the content and materials, including any jokes and sketches (the “Materials”), delivered during his performance. The Materials may not be copied, translated, transmitted, displayed, distributed, or reproduced verbatim (the “Use”), in whole or in part, in any form, media, or technology now known or later developed, without the express prior written consent of Pilot Boy Productions, Inc. Any Use of the Materials without the express prior written consent of Pilot Boy Productions, Inc. is strictly prohibited and shall be subject to all available legal remedies, whether in equity or at law at the cost of anyone who violates this prohibition.
About Dave Chappelle
Dave Chappelle is an award-winning American comedian, screenwriter, television and film producer, and actor. Recognized as one of the greatest comedians of all time, Chappelle is the 2019 recipient of the prestigious Mark Twain Prize for American Humor. Chappelle’s work has earned him more than 30 nominations and awards in television and film for projects that include his groundbreaking sketch comedy television series Chappelle’s Show, comedy specials, and guest appearances on Saturday Night Live. Chappelle has received five Emmy awards including three for his Netflix comedy specials Sticks & Stones (2020) and Equanimity & The Bird Revelation (2018), and two for hosting Saturday Night Live (2017 and 2021). Chappelle has won the Grammy Award for Best Comedy Album three years in a row, 2018 through 2020. In May 2021, Dave Chappelle collaborated with Talib Kweli and yasiin bey to host The Midnight Miracle, a thought-provoking podcast that uniquely blends the salon and variety show traditions while providing a glimpse into the inner lives of the hosts.