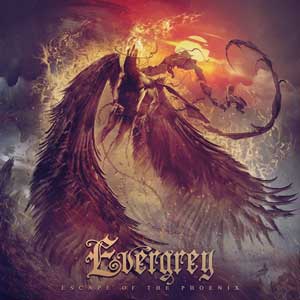 The 12th album for this progressive metal band is powerful.  Following their trilogy of Hymns For The Broken (2014), The Storm Within (2016) and The Atlantic (2019), Escape Of The Phoenix is pounding, relentless, even beautiful.

When it came to titling this after the songs were written, front man/ founder Tom Englund had a clear concept in mind.  “When you talk about the resurrection of the Phoenix that started a mind game for me” Tom says. “What if the bird doesn’t want to be resurrected?  What if it doesn’t want to come back?  That sort of resembles things in life; sometimes you get tired of standing up and being strong.  It came to me after we’d finished writing the music.”  Written and recorded during the pandemic, the album came to life according to plans laid out in 2019.  An unexpected benefit was the lockdown gave the band time to work unhindered.  And with their epic trilogy in the rearview mirror, as a lyricist Englund was free to explore a variety of subjects ranging from personal to his view of the world without worrying how they might fit a storyline.

Escape Of The Phoenix is heavy, dirge-y and quite powerful sonically and emotionally.  It isn’t as rhythmically complex as Dream Theatre but it’s still compelling.  Interestingly, Dream Theatre singer James LaBrie can be heard on the track The Beholder, a duet with Englund, who is a DT fan and thought the song would benefit from Labrie’s participation- so he sent him an email. “I just wrote to James and told him about the idea for the song, and that it would be great to have him on it” Tom says. “He really liked the song and agreed to do it. He sounds amazing on the track, and we sound great together,”

Produced by Englund and Evergrey drummer Jonas Ekdahl, Phoenix hits hard and has considerable heft.  There’s a darkness melodically and lyrically, with a steaming rhythm section that includes bassist Johan Niemann and some spectacular guitar work from Henrik Danhage.  Keyboard work from Rikard Zander is unobtrusive, but you’d notice if it wasn’t there.   This is a dense, dark beast that I’m severely enjoying.

KEY CUTS:  The Beholder (with James LaBrie), Escape of The Phoenix, The Darkness In You 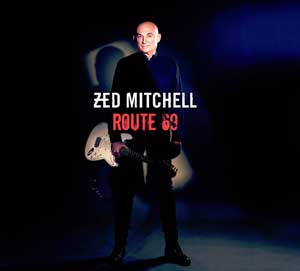 If you’re a fan of Mark Knopfler’s work, you’re going to love this guy.  Route 69 is Zed Mitchell’s 8th solo album in 13 years and it’s a mesmerizing set that illuminates the blues from different perspectives.  His guitar tone is sumptuous and this record is hypnotic.

I confess I’d never heard of Zed before this, but he’s one of Europe’s leading session guitarists and has drawn  comparisons to Clapton, Peter Green, Robert Cray, JJ Cale and yes, Mark Knopfler.  He worked as a session guitarist at Arc Studios in Munich, playing with people like Tina Turner, Phil Collins and Natalie Cole.  He also worked with Elmer Bernstein on the soundtrack to Indiana Jones. His playing style is rooted in but not restricted to the blues.  “People talk about my influences” he says, “but I prefer to draw on various styles to suit a particular song and ultimately work on my own style.”

All the tracks on Route 69 were written by Mitchell with lyricist Pete Feenstra contributing to 4 songs.  Of Zed’s playing, Pete notes “(he) says more in a note than many guitarists can achieve in a solo.  He subconsciously taps into musical thoughts, themes and moods, so the songs nearly write themselves.”  It’s that touch, that connection between all of the musical elements at play that really draws you in.  As a guitarist he has a similar touch and sense of melody as Knoplfer, and as a singer he’s a cross between that and Steely Dan’s Donald Fagen- not a gifted vocalist, but there’s an earthiness to his singing that somehow helps his songs come across.

When I need to blow off some steam I usually reach for Sabbath, Zeppelin or Kiss… but there are also times to just sit in the music room by the glow of a lava lamp while I relax and think about life; where I’ve been, where I am, and where I might yet go.  At times like that the right music is crucial to deep contemplation, and I can scarcely think of better company than Route 69.

KEY CUTS:  By Sundown You’ll Be Gone, Life Will Always Find You, Blue In Your Eyes 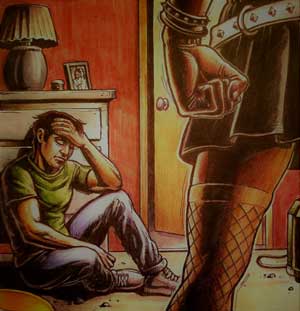 Some hard driving blues/ rock here out of Wisconsin.  Bruised, the follow-up to 2016’s 333, is hard swinging rock & roll based in the blues.  The band bills themselves as “the musical mathematicians of rock-n-roll religion”, and they play it like they mean it.

My first impression of Bruised is The Doors meet Molly Hatchet, but like any band that holds your attention for any length of time they shift gears.  The band itself- Reverend Rob Atwood (guitar, vocals), Jamey Clark (drums), Greg Rotiek (bass), David Passow (harmonica) and Matt Ostlund (sax)- are talented but unpretentious in their playing for a refreshing roll-up-your-sleeves-and-let’s-see-what-you-got approach.  This batch of songs is about things like life and love, with Appreciate Your Soul being written specifically about their fans.  Their sound has been described as “rock-tinged alt-country with a strong melodic base”, and their influences include T. Rex to ZZ Top.

When I review stuff like this I know I keep coming back to the image of roadhouse joints with sawdust covered floors and the night hasn’t really started until there’ve been a few fistfights, but Dirty Deuce’s new album strikes me as being the perfect soundtrack for a rowdy Friday or Saturday night along those lines.  Hell, I can even picture them as the house band in the Patrick Swayze flick Roadhouse in place of The Jeff Healey Band. Not that these songs are violent but some of the musicianship is aggressive and in your face in a really cool way.  And when they’re jamming on a longer cut like Agree To Disagree you can picture all of the guys closing their eyes and going for it as they raise each other up and surrender themselves to the song itself… it’s quite thrilling.

There are times when Atwood is singing that he has a real Jim Morrison kind of swagger, but overall I think ‘rock-tinged alt-country’ probably describes him and the band best.  There’s an element of danger to their music, an appealing sleaze factor that nice people probably shouldn’t admit to enjoying, at least not by the light of day.  Rock & roll should be dangerous and naughty… and if it’s Bruised, it’s gonna leave a mark. 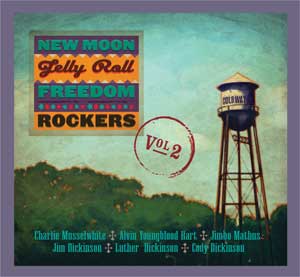 Here is the latest installment from an incredible roots super group.  Following last fall’s Vol.1, New Moon Jellyroll Freedom Rockers Vol.2 is a wonderful southern adventure filled with great music. It’s as good as I dared to hope it would be.

If you didn’t catch the first disc, you’ll want to track it down. NMJRFR’s lineup will make any blues fan salivate with anticipation; Charlie Musselwhite, Jimbo Mathus, Alvin Youngblood Hart, Jim Dickinson, Luther Dickinson and Cody Dickinson.  As Grant Britt of No Depression notes, “In true rock & roll tradition, NMJRFR was born in the back of a tour bus, and they’re everything the name implies; raucous, ratty, raw, and magnificently loose… a group of road-tested warriors turned loose for a rip on what they dubbed a potluck session.”  They just cut loose and had them some fun.

Vol.2, recorded no doubt during the same sessions as Vol.1, puts you right in the room with the band with occasional between-song banter.  This is a hot, humid, full blown southern experience.  Last year’s disc was a Top 20 Billboard /Top 10 Living Blues album smash, and I can see this latest effort doing the same.  The casual excellence of this album is a sublime experience; great playing by all concerned without straining or grandstanding, just playing the way they know how and letting the nature of the music dictate where they’re going to go.  When someone’s a great actor you can’t see them doing their job or trying too hard, they just are. The same goes for the musicians in New Moon Jellyroll Freedom Rockers… they’re so naturally gifted and in tune with each other, the music feels effortless.

Vol.2, like its predecessor, sounds and feels vintage and timeless all at once.  My God, I can’t imagine any real blues fan being less than thrilled with New Moon Jellyroll Freedom Rockers.  Both volumes are essential listening. 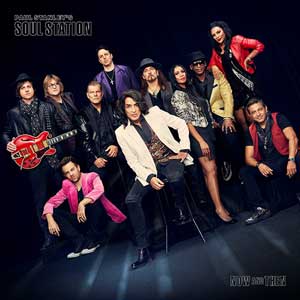 Kiss fans have known for quite some time that this was coming, and I’ll bet the rent that some of them hate it.  Now And Then is a faithful reinterpretation of Motown classics, plus 4 songs written in the same style.  The delightful surprise here is how well it works and how at home Paul sounds singing these songs. This is a homerun.

“There are only two kinds of music; good and bad” Stanley said in a recent article in USA Today. “I didn’t find this any different than when I did Phantom Of The Opera– it’s all music, and it’s music that has connected with me for many years.”  Soul and Motown is the stuff Paul grew up on before he encountered rock & roll, seeing some of the greats live as a kid in New York City. They say you stay fond of the music of your youth- something I know to be true- so Now And Then makes perfect sense.  It’s also a kick to hear Stanley doing music outside of what we know him for.

Now And Then is a harder left turn than Peter Criss’s soul-drenched solo record was in 1978 when all 4 members of Kiss did them but this is outside the band, an affectionate side project if you will.  It reveals a whole new side to Paul as a singer, a seemingly effortless falsetto that channels Smokey Robinson, and the band swinging and grooving behind him that makes Kiss sound downright clunky in comparison.  At the age of 69 it’s a bit much for Stanley to dance around on stage in 8 inch heels shouting at the top of his lungs- N&T is the type of thing he can sing for as long as he wants to.  The music he plays with Kiss is almost performance art; this you can feel coming from his soul.

I’ve been a radio deejay since 1975 and have played many of the songs Paul Stanley’s Soul Station cover on the radio.  The recording and production techniques have improved over the years but I can feel the mojo in these songs with Paul and the band.  “It (isn’t) about mimicry, it’s about getting the gist, the intent and the emotion behind the song” he said on yahoo.com. “I thought it was important to bring the music to the present without making it ‘new and improved’ because it doesn’t need to be improved.” Now And Then succeeds, spectacularly so.

KEY CUTS:  Could It Be I’m Falling In Love, Tracks Of My Tears, Let’s Stay Together