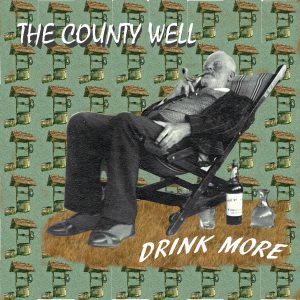 I’m 63 and have been listening to music forever, so nothing much surprises me- but this did. Drink More is this sonically experimental collective’s 3rd album, following Future Country and A Little Infinity. It’s one of those records that when you think you have it pinned and understood it morphs into something else. Throw any label at it you like; noir country, elastic pop, trippy escapism, funk, and each might stick… but not for long.

County Well co-founders are Graham Guest (lead vocals, guitar, banjo, pedal steel, keyboards) and Don Zimmer (producer, guitarist, songwriter) who pursues the Tom Waits ‘mad professor’ creative approach in the recording studio. Painstakingly recording one track at a time with talented musicians from across the country, Zimmer’s efforts have yielded the 12 track Drink More, a 32 minute journey across several genres. Zimmer moved from Marin County to the Wood River Valley of Idaho, and while I don’t have the first 2 albums for comparison, it’s been good for his sense of groove.

Drink More is a slippery beast that defies easy description and that’s a thrill. Throughout the disc Guest and Zimmer along with their musical compadres offer a unique vision that displays a love of blending voices while keeping the grooves nice and tight. I suppose that displays an inclination towards funk on a number like Big Country Love with tasty keyboard work and a hypnotically repetitive lyric, then you run into Drink More which is closer to traditional country; sort of like Cowboy Junkies but without the Prozak.

The press info offers a short description of the spirit for each song. For example; Gifted Spirit is about that short, euphoric time between triumph and breaking the law… Jackson is about your favourite road, Drink More is about life-altering strategy, and Big Country Love is described as a big couch of a groove. Laid back and attention grabbing at the same time thanks to supple musicianship, Drink More is one of those albums that sneaks up on you and, before long, you’ll wonder how you ever got by without it. 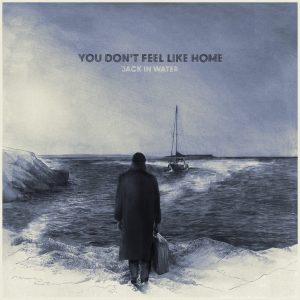 YOU DON’T FEEL LIKE HOME Jack In Water (Nettwerk) ** ½

After a string of well received DIY EP’S, Jack In Water (Will Clapson) has released his full length debut, following a string of emotionally charged singles. Exceptionally crafted dreamy pop soundscapes cover a range of dark, emotionally volatile subjects… probably not good to listen to if you’re feeling depressed.

It might be an odd thing to say, but many of the songs here feel like they should’ve been on the soundtrack to the movie High Fidelity, in one of the scenes in the record shop, they just have that feel. You Don’t Feel like Home is fraught with drama as Jack In Water (Will) delves into his childhood to explore issues like sexual abuse, alcoholism and the discovery of death, as well the topics of family, friendship and falling in love. In other words he leaves no stone unturned.

You Don’t Feel like Home was produced by Oli Bayston (Loyle Carner, The 2 Bears) at his East London studio. The sound and texture is lush and dreamy with breathy, double tracked vocals and keyboard textures that perhaps nick a thing or two from Enya. It’s not the kind of thing you’ll want to throw on at your next house party- whenever we’ll be able to have those again- but it’s more something you’ll want to put on and put your feet up as it helps you float away. Some of his lyrics get pretty dark, so watch out for that.

Brought up in a little village in Essex, Jack In Water (Will Clapson) has to date an impressive accumulated streaming figure of over 10 million- not bad for a guy that has done it his own way. I can only go on how the 10 songs on this album make me feel, and I gotta say I’ll need to be in a rather specific frame of mind to open myself to the manic depressive pop of You Don’t Feel Like Home. It’s the kind of record that, if someone walked in on you listening to it they’d ask “are you okay?” To which I’d have to answer a resounding “maybe”. www.nettwerk.com/label-film-tv/jack-water

KEY CUTS: You Don’t Feel like Home, Everyone Will Be Lost, Anxious Smothers 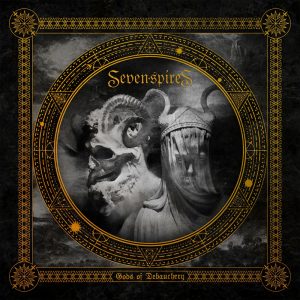 After a record like Jack In Water, running as far as possible in the opposite direction felt like the right move. Gods Of Debauchery , Seven Spires’ third album, is many different styles of metal under one roof; symphonic, progressive, black, death, you name it. Thank God for the ballads or I don’t think I’d have had the strength to get through it.

Though signed to an Italian label, Seven Spires are an American quartet, whose members met while studying at Boston’s Berkley College of Music. Yeah- the same school Bruce Cockburn went to. Spires’ music is described as “part bittersweet melodic metal anthems, part apocalyptic melodic death and black metal, and part Romantic Classical poets”. They are storytellers that draw from across the spectrum of metal and beyond to spin their tales of death, love, and the peculiarities of the human condition. They cover a myriad of metallic styles as noted above, and the stuff that works best for me is in a more traditional vein, like Lightbringer. The symphonic elements bring some high drama, but I have to say death and black metal styles have never really held my interest.

It’s not often you find a chick singer doing death metal vocals and doing a convincing job, but that’s exactly what happens on Gods of Debauchery. The singer is Adrienne Cowan, who also plays keys, and I enjoy her much more when she isn’t howling like a vampire being bathed in holy water. And while we’re at it, the other members of the band are; Chris Dovas on drums, Jack Kosto on guitars, and Peter de Reyna on bass. Unlike other metal bands, however, Seven Spires don’t lean heavily on guitar heroics to get their point across. When Kosto does step out to solo it’s always a perfect melodic fit with whatever is going on around him as opposed to “Look how fast I can play and golly, listen to those pinch harmonics!”

There are parts of Gods of Debauchery that I enjoy very much, but when they get into the death and black metal with blast beat drumming and distorted howling vocals, it leaves me cold. The lyrical vision is impressive as is the musicianship, but overall this isn’t my cup of tea and I’d wager there aren’t many guys of my ‘vintage’ that would be into it. 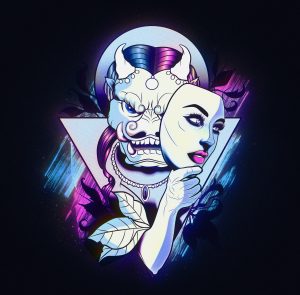 Some Finnish rock & roll, anyone? Founded in 2017, their first record was an independently released EP. Unchained, Thy Row’s first full length effort is the follow up, is a mix of traditional heavy metal and modern hard rock. Aimed at fans of Scorpions, Megadeth and Queen, this is an amalgam of insistent hard rockness and some pretty shit hot guitar playing.

“Creating this album was a long and hard process, but it is also a road we wanted to walk to be able to present this music to the people” say the band. “Every song, every story is connected to our lives and our friendship, and we hold this piece very close to our hearts. None of us wanted to compromise in any area.” Unchained has a straightforward 4 on the floor rock & roll energy, a Friday night denim & leather with fists raised kind of feeling I find invigorating, and Mikael Salo is really built to sing this kind of stuff.

Unchained is the kind of propulsive, straightforward rock that lifts you up as it gives you a swift kick in the pants. The rhythm section of Juho Jokimies (bass) and Teemu “Snake” Laitinen (drums) plays it straight down the middle, but it’s the guitar playing of Jussi Laulainen and Ville Vase that make this album so much damn fun to listen to. A fair number of special guests were involved in the making of this record too, but you can get that from the album credits or the band’s website.

In a time when people ask where rock & roll is headed or if it’s dead for the umpteenth time, along comes a band like Thy Row to lay down the law and show us how it’s done. Unchained can be seen as a bit of an 80’s throwback, especially with the requisite power ballad in Down On My Knees, but that’s just scratching the surface; dig just a little deeper and you’ll be rewarded with meaty, righteous rock & roll. Love the energy, the playing, the attitude and an uncommon lyrical depth in this particular type of music. Yeah- gonna be keeping this one in the car for a good long while. www.facebook.com/ThyRowBand 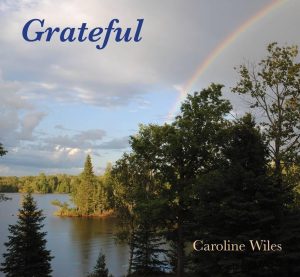 After a couple of hard rockers, this disc is a good way to mellow and finish off this week’s reviews. Grateful is Caroline’s fifth album, and it feels just like tuning into an old 70’s AM radio station. Clear, clean vocals and an uplifting sound lyrically and melodically make this disc an anomaly here today but a welcome one nonetheless.

Wiles is quite clear about why she makes music in the first place. “It’s not about a need for attention” she says. “I’m not doing this for fame, I’m not doing it for fortune, I’m doing it because I feel it’s what I’m supposed to be doing; to make music that’s enjoyable and uplifting.” There’s a purity to her singing that reminds me of Anne Murray and Karen Carpenter in their prime, and her songs have a kind of Gordon Lightfoot feel to them. In fact she covers his Talking In Your Sleep, and Gord himself praises the album by saying it’s got “a lot of really strong material, wonderful vocals and harmonies.”

Grateful was produced, as were her previous records, by Bob Doidge; owner of Hamilton’s Grant Avenue Studio. Bob has worked with everyone from Bob Dylan and Gordon Lightfoot to U2, often in the company of Daniel Lanois, and the chemistry between producer and artist is quite evident; he gets what she’s trying to do and knows how to get her there. The gentle folk/ pop melodies are a tonic in wild and uncertain times, something to hang on to when the world around us goes mad.

If you’re not familiar with Caroline Wiles and have not yet sampled this album, Unchained feels like Gordon Lightfoot tunes sung by Anne Murray. There’s something very Canadian feeling about this thing, and I think Caroline would be okay with that. I look to different artists for different things, like the hard rock of Thy Row for a shot of energy to power through the day. Throwing on the new Caroline Wiles is like finding yourself in the middle of a deep conversation with a long standing friend that really gets what you’re going through, and both are worthwhile experiences. Think I’ll spin this again tonight right before bed. https://carolinewiles.com

KEY CUTS: Make A Memory, Talking In Your Sleep, 59 Valentines