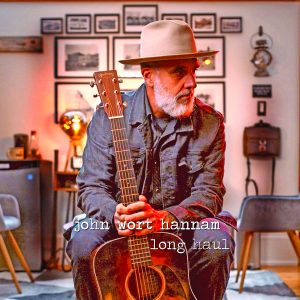 I call myself a rock guy, but after becoming completely captivated by John Wort Hannam’s latest (and 8th) that is clearly not the case. A gentle suite of songs with a distinct country flavor, Long Haul is a set of songs about life.  Music aside, there is some pretty fine storytelling going on here.

Long Haul is a brace of narratives that trace small victories through faith, resilience and humour, a balance of personal and universal subjects created in the vacuum of the pandemic.  “I’ve become more comfortable writing about myself than I ever was in the past” John observes.  “Recently I’ve realized that I don’t need a crazy, drunken, bound for the jailhouse kind of life to write good songs.  Long Haul is a reflection of my life up to this point, and for the first time, I think that my songs perfectly encapsulate where I’m at as an artist and a person.”

After writing this batch of tunes the challenge was to get them recorded, so he went to his friend and longtime producer Steve Dawson to get it done.  Thanks to the you-know-what this had to be done remotely, and once they got down to work the thousands of miles between Lethbridge and Dawson’s Nashville studio disappeared.  Hurry Up Kid is about the nature of youth and the relentless passage of time, and Other Side Of The Curve was written after talking to a friend who had to endure lockdown thousands of miles away from those she loved, leading Hannam to examine his own life and realize how lucky he was to have his family with him.  Lest you think everything here is ultra serious, listen to Meat Draw and Beautiful Mess to lighten the load.

A record succeeds when the listener can see flashes of his or her own life in the songs and find things in them they can relative to on a deeply personal level.  When I listen to Long Haul, I hear the person I am as well as the person I would like to be; it doesn’t get any better than that. 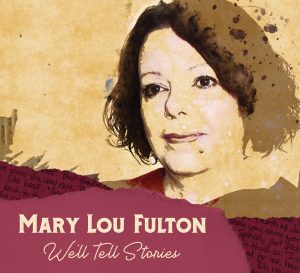 This is Mary Lou’s debut album. Drawing from her upbringing in the border town of Yuma Arizona in a Spanish/ English household, plus a career as a journalist for The Los Angeles Times and The Washington Post Fulton fills We’ll Tell Stories with heart & soul.

Mary Lou, thanks to the life experiences that brought her to this point, is a social justice advocate, and you’ll feel that in the personal and political songs throughout the disc. “This album explores what unites and divides us through musical stories about country, family, resilience and love” Fulton says of We’ll Tell Stories. “My songs take on some of the big themes of our time, but in a personal and hopeful way.”

The disc was produced in Los Angeles by Rob Seals, a talented multi-instrumentalist plus founder and director of The Songwriting School Of Los Angeles. The songs of We’ll Tell Stories are urgent and gentle at the same time, powered by her rich and clear singing voice. Her hometown newspaper The Yuma Sun says “Straddling the worlds of music and journalism, her very nature is rooted in telling stories”. Her observations are direct and startlingly frank on occasion and that’s refreshing. In a way what she’s doing here reminds me of the protest singers of the 60’s like Dylan and Joan Baez; singing songs that make you think while you’re humming along.

Perhaps most indicative of what you’re in store for here is The Ballad Of Suaqui, a bilingual telling of the forgotten story of her mother’s village being destroyed to make way for a dam. “This tragedy took place almost 60 years ago” she says, “but the same thing continues to happen today as people are pushed out of their homes to make way for gentrification, factories and freeways.”

Mary Lou Fulton wants to entertain you, but she’d like you to think too. “When I write songs, I think about the conversations they might spark” she observes. “I hope my bilingual music will contribute to the conversation about how it’s okay to be who you are- all of who you are- as an American.” We’ll Tell Stories is a good record to spend the evening with. www.maryloufulton.com 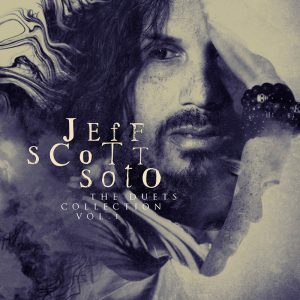 This renowned rock vocalist pays tribute here to some of the songs he has recorded over his amazing career, and takes it a step further. The Duets finds Jeff calling in some

friends and fellow rock singers to give the tunes a kick in the pants and create a unique duets album. One thing’s for sure… it kicks beaucoup de bum.

Even if you don’t recognize Soto’s name right away I’ll bet dollars to donuts you’ve heard him sing. Remember the movie Rock Star? That’s Jeff singing the Steel Dragon tunes; in fact he kicks off Duets with one of those songs, Livin’ The Life. He’s had quite the career to this point, including singing on Yngwie’s first 2 records, with Alex Rudi Pell and, of course, Journey in ’06 and ’07. He’s had quite the solo career over the decades and, as his fans know, Jeff recently joined the progressive metal super group Sons Of Apollo. Just some of the singers her invited to this particular party; Deen Castronovo, Eric Martin and Russell Allen of Symphony X and Allen/ Lande, and their voices blend naturally. “It was a dream to cast these voices” Soto remarks, “and I am so amped for you to hear the results.”

In many ways Jeff Scott Soto is an atypical rock singer, but that’s what makes his stuff so enjoyable. You don’t get the vocal acrobatics of a Rob Halford or the rasp of a death metaller but what you do get is rock solid, like well cured concrete. He picked the voices well for Duets, but let’s not forget the band that brings it all together; aside from Soto on vocals and keys we have Edu Cominato on drums, Tony Dickinson on bass plus Jorge Salan, Howie Simon and Leo Manic on guitars. This is hard rock that hits you right between the eyes, ‘melodic metal’ if you prefer that label, and it has the beef to power any high speed highway run; you know I’ve done the research.

The Duets Collection Volume 1 is another one of those ‘pandemic projects’, but rather just a time killing exercise this has turned out very nicely. I’m not familiar with the original versions of many of these songs but that’s okay- this is muscular, big time rock fun. https://www.facebook.com/JeffScottSoto/ 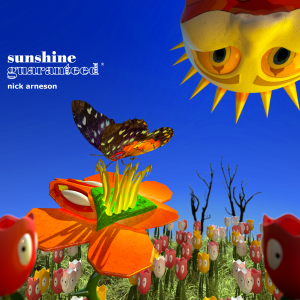 It’s a new album from Portland based songwriter Nick Arenson. Sunshine Guaranteed was written during a time of personal turmoil and his lyrics reflect that. He shares the year that we’ve all been through along with the emotional whirlwind of divorce (having

been through myself 2 I’d rather have a root canal without the freezing), which means there is much to discover here. Unfortunately, the music doesn’t measure up.

In describing Sunshine Nick says “You’re 42 and you’ve never lived alone? This should be fun. Your best work will come out of you at the tail end of a desperate late night panic attack where everything feels like it’s caving in around you, and suddenly like a light in the distance a new song will vomit up from some unknown depth and scratch the maniacal itch you didn’t know was there until it is soothed.” Sounds like my kind of guy.

Throughout last year Nick collaborated on many aspects of this album with producer/ designer Jon Guisbert. “Nick is a true creative” Jon says, “and I think what I bring to the table perfectly matches his energy and goals for the album. So what you hear is really a sum of multiple forms of creativity and ideas combined. It was a blast to work together.”

So far so good, but when we get to the music itself is where Sunshine Guaranteed falls apart for me. Let’s start with the drum programming; it feels amateurish and makes the songs sound chintzy. Though I’d prefer real drums (I played for over 40 years) I’ve heard programming that’s so close to the real thing as to be indistinguishable. Like much of pop music that uses the same kind of programmed percussion as Nick and Jon do here, it adds nothing to the blood and passion of the songs themselves. Sunshine is a brave album lyrically, dark and emotional; but the gauzy keyboard textures and shitty pop music drum programming are a real let down.

I like what Nick is getting at with these tumultuous vignettes but musically, Sunshine Guaranteed drives me up the wall. Of course I’m well outside the demographic he’s reaching out to, so with that in mind please take my comments with a grain of salt. www.nickarnesonmusic.com 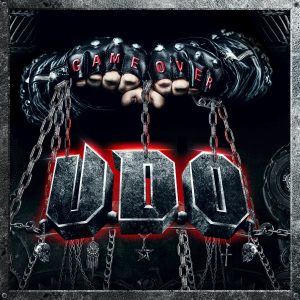 A new album here from the former voice of Accept and his band of merry men. Game Over voices singer Udo Dirkschneider’s concerns about global climate change amongst other things but perhaps more importantly the songs rock, and they rock hard.

“If mankind doesn’t rethink some things, it could have drastic consequences” Udo says of what he’s trying to get across with this record. It’s rare for metal to address such

universal concerns, but that’s exactly what Game Over is doing here. “We all, no matter where we live, just have this one planet” he continues. “(When) something happens, it always has international implications.” Dirkschneider has traveled the world over the past 40-odd years in his rock & roll life, he’s seen and done things most of us never will, and he brings that experience to this collection of poignant metal anthems.

Because of Udo’s voice, the lazy thing to do would be to compare this to an Accept record, but that doesn’t really fly here. If I were to express this in terms of cars, current day Accept (who I really enjoy) is like a nimble Porsche Cayman or maybe a Boxter while U.D.O. is a late 60’s Dodge Charger. Given a choice, I’ll take the Charger every time. Game Over feels like a really solid Judas Priest record than anything else. Even the piano ballad Don’t Wanna Say Goodbye fits that mold as he struggles to keep his emotions under control. Rock & roll theatrics? Maybe… probably… but it works.

Lyrical concerns aside Game Over is, above all things, metal. Produced by Mattes, this is classic stuff. Other than Udo the band includes his son Sven on drums and bassist Tilen Hudrap, who provide a solid backdrop for guitarists Andrey Smirnov and Fabian Dee Dammers, who reel out manly riff after manly riff almost effortlessly, and their soloing brings considerable excitement. These guys are friends and have been playing together for years, so there’s a tightness in their performance that comes naturally.

Nothing fancy or tricky about Game Over-it’s just a straight up bad-ass metal/ rock & roll record saying some worthwhile things that we should be paying attention to. U.D.O. has now put out 24 albums, and this might just be their best, most potent yet. www.udo-online.com