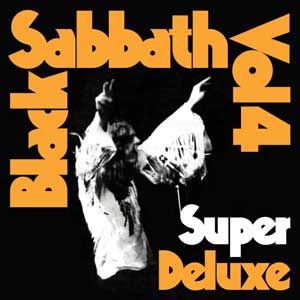 Black Sabbath has been my favorite band for 50 years.  Of all their records, Vol 4 is my #1.  Despite declaring a moratorium on reissues and deluxe box sets I made an exception in this case- glad I did.  Went whole hog too, got the vinyl and CD versions.

Previously I had purchased Pink Floyd’s Immersion Box sets for The Wall and Wish You Were Here.  Each came with unnecessary gewgaws and, after listening to the discs of bonus material once, I put them away for good.  As for your standard reissue, unless the mix and/or production has been greatly improved or the bonus material is remarkable, why bother?  I then decided no more reissues, I would be content with the original albums as I have enjoyed them- until now.  Unless you’re a ‘super-fan’ something like Vol 4 Super Deluxe is ludicrous, the mistake I made with the Floyd sets.  I like the Pinks and many of the songs, but not nearly enough for that sort of expenditure to make sense.

Vol 4, originally released in 1972, was the first album Sabbath recorded in America, and the first they produced themselves.  They rented the DuPont mansion in Beverly Hills while they recorded and, according to bassist Geezer Butler, spent more on cocaine than the recording sessions.  In fact they wanted to call it Snowblind, but Warner Bros. said “no” and they had to settle for a thanks to “the great COKE-Cola company of Los Angeles” in the credits.  Even on all that blow, they managed a remarkable piece of work.

Vol 4 Super Deluxe breaks down into 5 LP’s, 4 discs for the CD version; Disc 1 of each is a newly re-mastered version of the original album with a cleaner mix and enhanced sonics.  Disc 2 & 3 of each feature outtakes, new mixes, alternative takes of album tracks, false starts and studio dialogue. Too much for the average fan?  Of course- but hearing the alternate takes, some with guide vocals, is like being in the studio with my favorite band while they make my favorite album.  The 4th and 5th LP/ 4th CD was recorded live in the UK on their 1973 tour.  Portions of it were available previously on Live At Last, a concert album released in 1980 by a previous manager (the infamous Patrick Meehan) without the band’s knowledge or consent. It’s presented here as a typical full gig by the band from that period and, frankly, it kicks LAL’s ass up and down the M-1.

Other than that, bonus features include a hard bound 60 page book with photos, press clippings, a well done essay, and quotes from the band members themselves from that time period.  The vinyl and CD box sets also come with a reproduction of an early poster from the record company when “Snowblind” was still being considered as the title with the quote “Ice-hot till hell freezes over on Warners” on the bottom. I believe I’ll keep one in the packaging and have the other framed for my music room wall.

Unlike those Pink Floyd Immersion box sets, Vol 4 Super Deluxe is something I will be listening to repeatedly, and I’m super glad and super proud to add it to my collection. 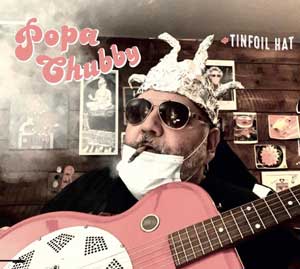 Lots of recent records have been informed by the social turmoil of the pandemic, and the new Popa Chubby is no exception.  Due out March 26th, Tinfoil Hat is one of the most emotional and powerful albums of his career.  Popa pulls no punches- not that he ever really has- and the songs resonate lyrically and musically.

Popa Chubby’s last live show was March 12th, 2020, after which he and the band barreled home in their van with the world on the verge of shutting down.  “I was home in isolation with a bunch of guitars, drums, amps, microphones, losing my mind” he says.  “I started writing songs, I wanted to make people feel better. This record is as true as I’ve been in 60 years on the planet.  It’s birthed from love, desperation, fear, frustration, pain, sorrow, and resolution.  Like you, I have been pushed to the limits of my humanity.”

Every instrument on Tinfoil Hat was played by Popa (real name: Ted Horowitz), every song was written by him; he recorded, engineered and produced too.  As an extremely talented guitarist it follows that Ted would be able to handle the bass and his drumming, though at times rudimentary, fits the raw emotion and texture of the songs.

The heart of the record is surely Can I Call You My Friends?   Written first, it really informs the rest of the album. “We had 30K hits on social media almost overnight” he says, “and the outpouring of love was both healing and mind boggling.” At the other end emotionally is Cognitive Dissonance, a reggae number that digs deeper to scratch the soft white underbelly of how humanity is handling (and sometimes failing) in dealing with this Corona-Virus.

From rock to blues to soul and reggae, Tinfoil Hat is a diverse and very enjoyable piece of work as Horowitz connects on so many levels. The pandemic may have been the catalyst that set this creative cycle in motion, but he takes aim at society as a whole too.  His dedication in the liner notes really sums up what this disc is about; “This record is dedicated to the memories of all the souls who departed this mortal coil due to Coronavirus disease. May truth be our light to guide us through this dark night.”  An album likes this makes it seem like that is actually possible- amen, brother.

KEY CUTS:  Tinfoil Hat, Can I Call You My Friends, Cognitive Dissonance, 1968 Again 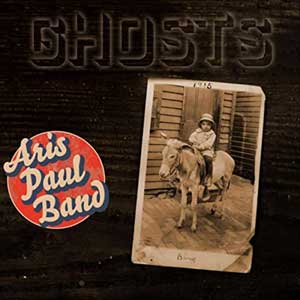 The second album from the Aris Paul Band is a record with some serious mojo. Ghosts is a collision of blues, soul, power pop, twang and rock & roll.  This trio has serious jam chops, and listening to this disc is a blast.

The band established a ‘red-eyed road rock’ template on their 2018 debut Drive All Night which saw Aris backed by a gaggle of studio all-stars.  Ghosts, however, is the byproduct of a band with a sound.  “This is more focused” Aris says.  “It’s the three of us- Aaron and Matt aren’t on the first record. This is our band, our sound- brighter, like neon daylight.”  The new disc is also what Aris envisioned from the very beginning, “a little angsty, a little rock & roll, all blues, roots and soul.” It’s an easy record to connect with.

There’s a Crazy Horse crossed with SRV energy at work here, a ruggedness that you don’t find in that many rock & roll records these days.  While they jam away madly on a cut like Little White Screen, bassist Matt Scott’s inventive, driving bass lines are easily as enjoyable as Paul’s guitar heroics, and drummer Aaron Wagner keeps the pulse without getting too fancy.  Plus, you gotta love they way the quote the melody from Hey Joe in the middle of the song- I really enjoy stuff like that.

A lot of things go into making Ghosts sound the way it does, but if I had to throw a label on this I’d call it “manly rock & roll”.  I also love that it’s a personal record too.  “Everything on this album is factual, the songs are all about old relatives or people I used to know” Aris says. “I like to write songs about real people and real stories, that’s what compels me.”  It’s also one of the things that make this a great record. 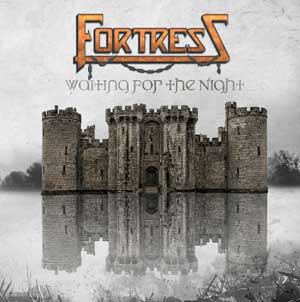 A blast from the past- literally.  Fortress were one of the darlings of the Sunset Strip scene and were on the verge of signing a deal in the late 80’s when grunge reared its head and said “not so fast”.  Waiting For The Night is a sign of what could have been- recorded in the late 80’s but never released until now, the songs are a cross between Iron Maiden, Whitesnake and the Crue. These tracks show promise and ambition- they could’ve been contenders, they could’ve been somebody.

Fortress played all the usual places on the strip like Gazzarri’s, The Whiskey, The Roxy, The Troubadour, often sharing stages with Warrant, Poison and Alcatrazz.  “It wasn’t uncommon to see the likes of Tommy Lee, Ronnie James Dio or Iron Maiden’s Adrian Smith in the crowd watching us, at any given show” says keyboardist Chris Turbis.  A deal was within sniffing distance, but when bands like Nirvana happened seemingly overnight, the entire record industry shifted, the Strip changed, and so did the taste of every record exec who still had a job.  As a result an awful lot of talented bands like Fortress were left holding the bag and saying things like “you want fries with that?”

Sonic Age is a label that specializes in releasing recordings from bands that come from the glory days of metal.  In listening to Waiting For The Night it is readily apparent that the band were in the same league as bigger bands in terms of songwriting and the disc is like a blast of that 80’s strip energy, bringing with it the smell of beer, vomit and hairspray.  When Will The Fighting End “was written in 1985/86 but has never been so globally relevant as it is now” says Turbis.

The songs are energetic, what one critic calls “top-down-on-the-convertible driving tunes”, but the problem here is the production.  Thin and reverb-y, it sounds like Motley Crue’s first album Too Fast For Love; hard-driving songs knee-capped by shitty production.  You can’t lay that all on Fortress; they were an 80’s Sunset Strip band and EVERYONE sounded like that.  If the songs weren’t as good as they are I wouldn’t have reviewed the album- fans of that era of metal history will eat this up, and rightly so.

KEY CUTS:  When Will The Fighting End, The Cycle of Life, Never Look Away 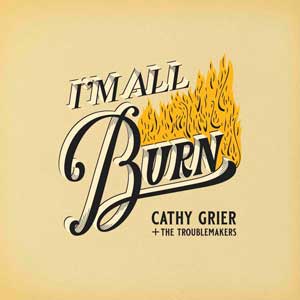 This is Cathy Grier’s 14th album, and it’s a smooth soul ‘n’ blues pleasure.  I’m All Burn plays like a cross between Bonnie Raitt and Mark Knopfler, suave with just the right amount of blues greasiness and guitar playing finesse that feels so good, so right.

I’m All Burn achieves a remarkable balance of being easy going yet intense, the songs sequenced perfectly to maintain a wave-like groove that rides through the whole album, from sultry to funky, from the bayou to Chicago and all points in between, including Memphis.  Just over four decades of being a working musician is brought to bear on Grier’s latest work, and she’s tapped deep into the well of musical talent in her adopted home state of Wisconsin. “The people on this record are some of the most amazing musicians I’ve ever worked with” Cathy says.  The record is described as “a 16 song sonic watercolor painted across almost every facet of the blues landscape” and dammit, that’s exactly what it feels like.

I’m All Burn was produced by Grier; “I’m old school as far as producing (goes)” she says, “very hands on and involved.” From the recording of the instruments to the overall balance between guitars, bass, drums, harmonica and horns, there’s a craftsmanship approach to making this almost hypnotic music.  She’s a gritty, soulful singer, which adds more depth to the songs and makes them even easier to absorb through the ears and the heart.  15 of the songs are originals, with the exception of a sweet cover of Bobby Gentry’s Ode To Billy Joe that reflects the emotional content of the original without being a copy- more of a slinky, sultry hot southern summer groove.

At 16 songs your average record would feel too long, but not this. In a world where a short attention span is the norm there’s something luxurious and decadent about putting this album on and letting it have its way with you.  After listening to I’m All Burn 3 times today, I feel spent and refreshed at the same time.