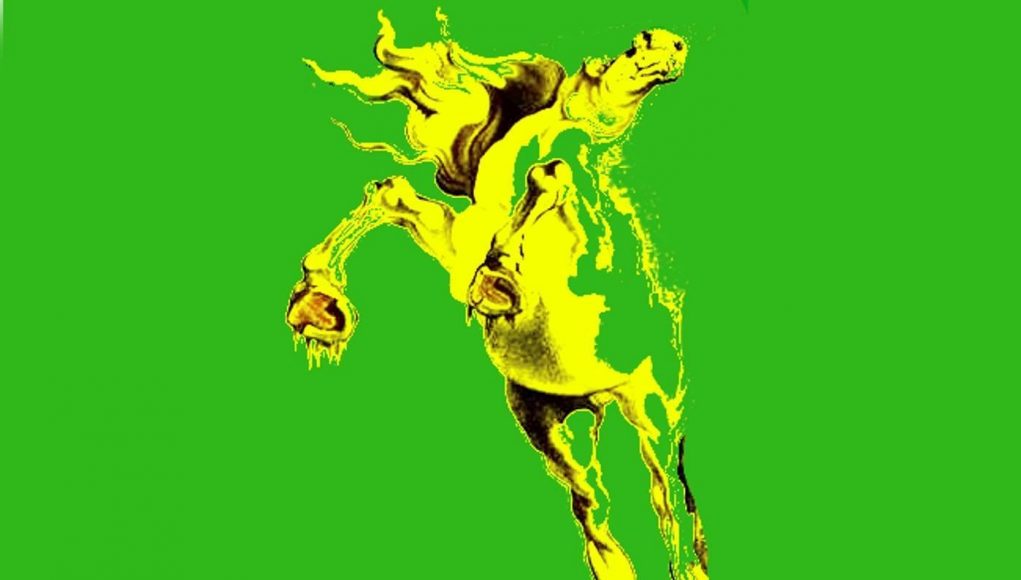 We here at Gonzo Okanagan are fans of music in it’s many, many forms. One of the bands that we caught this summer was Kelowna’s instrumental rock act High Horse. We caught them at the Tune It Down, Turn It Up festival at Habitat – and we’ve been hooked ever since. That’s why when we heard the quartet was dropping a new record, we wanted to hear it.

In live situations the trio has been known to transfix an audience with their vast soundscapes, blending groovy progressive rock with the occasional heavy doom breakdown. This band creatively explores what’s possible with a hard rock trio, and they execute it really, really well. They rarely – if ever – have lyrics in their music, and focus on wide arrays of melodic exploration and rhythm changes.

The band had a very successful release at Fernando’s Pub in downtown Kelowna, and unleashed another set last week at Muninn’s Post to a sold out crowd.

The new record is brawny and boasts the band’s versatility. I would bring this record with me on late night drives, and I’d bring it with me for a long day of snowboarding up on the mountain. It can be dark and broody while at-once light and airy. Join me on the first listen as I break this bad boy down track by track.

The new record is called Good Food and starts with the explosive Multihedron. Riff work from guitarist Brian Looney guides the song back and forth from an aggressive punch to a dreamy soundscape, and back again. It’s a brash start and a sign of what’s to come on the record. Next Stop Fruitstand is a swingy tune with a chorusy guitar early, and it deconstructs to a bass-driven breakdown. Rob McLaren’s bass seems to conjure a deep head bang in the breakdown before the drums kick back in double time to bring us out.

Boss Bone Breaker busts in after Fruitstand with a fast Motorhead-esque riff that drives forward hard and heavy. Mid way through the song chaos takes over – and it feels like the band nearly loses it – until they bring back the original riff. It sounds like an iron horse galloping at breakneck speeds for the whole 3:03 of the song. Boss Bone Breaker is without question this writer’s favourite track on the record.

Betrayer is next and cuts in with a deep dark doom-y sound. Doom fans, stoner-rockers and even shoegazers would fall for this tune. Any semblance of subtlety is destroyed with the hypnotic riff of Betrayer. Andy Ashley’s drum work stands out in this track, punishing the listener with a drive all his own.

The High Horse boys cut back into a groove next with Head 2 Table, pulling the listener from the doom and gloom of Betrayer and bringing them to a dynamic instrumental groove. The dynamics in this one provide depth and layers that are worth listening through over and over again. It’s somewhat reminiscent of a Mars Volta jam track, with more cohesive musical changes and dynamics. At 8:31 this track is only the second longest track on the album.

Sicarus takes over the airwaves next with what starts as a soothing tonal riff, followed shortly after by a nearly destructive guitar tone likely pioneered by Looney. This track is a ride of progressive ups and downs. At times it’s tight and crushing, and then at times it’s loose and free. The bass is a comfort as you listen through this one, always returning the listener to a comfy home base. (Home bass? Bad joke.) Sicarus drives steadily into a slow burn, then a hot bed of coals as the band guides us into Dwale. What starts space-y and full of effects gets picked up and carried by Ashley’s drum work, and develops into a groovy and lightly jazz-flavoured exploratory mission. Just before the four-minute mark of this epic, the stripped-away melodic nature of the tune develops into a dangerous-sounding build, and then into a huge key change with crushing dissonance. The pauses in this development will make your heart skip… Then for something completely different, they take this song further into new territory with a latin-sounding riff that eventually pumps into guttural growls, then makes it’s way out with another punchy bassline from McLaren – eventually ending with a totally unexpected resolution.

Thunderchunk starts as a surf-rock tune that belongs on a skate video, and expands into an aggressive call and response between the rhythm and lead tones before it returns to the fast shuffle-like punker beat. There are a pile of sonic easter eggs in this track – I’ll leave it up to you to find them and figure out what they sound like.

Minimus starts with a drum intro from Ashley, followed by the rest of the melody instruments. This is a fantastically satisfying song to listen to from beginning to end. Though it’s short, it’s a generous reward for the listener – chalk full of resolutions and comforting major tones that will satiate you. Then, like double-clutching on the freeway, the band drives you directly into Ganzia Rosa.

Ganzia Rosa is a special track for the band. When legendary producer and former guitarist for Eagles Of Death Metal Dave Catching was in town, he did some production at ArcHouse Studios with a number of bands – and High Horse was one of them. Catching can be heard on this track. Ganzia Rosa is expansive, and a treat for the ears. The guitar tones Looney has chosen are exactly what I would want to hear in this song… It’s difficult to describe. This track is a fascinating ride that demands the listener’s attention from it’s initiation to the finish, eight minutes later.

This record isn’t for the faint of heart. It is well produced, and still grips the raw sound that has driven this instrumental band to this day. It’s complicated and artistic, just the way these gentlemen like it. I implore you to give it a listen, and if you like it buy it from them on their Bandcamp Page, linked below.