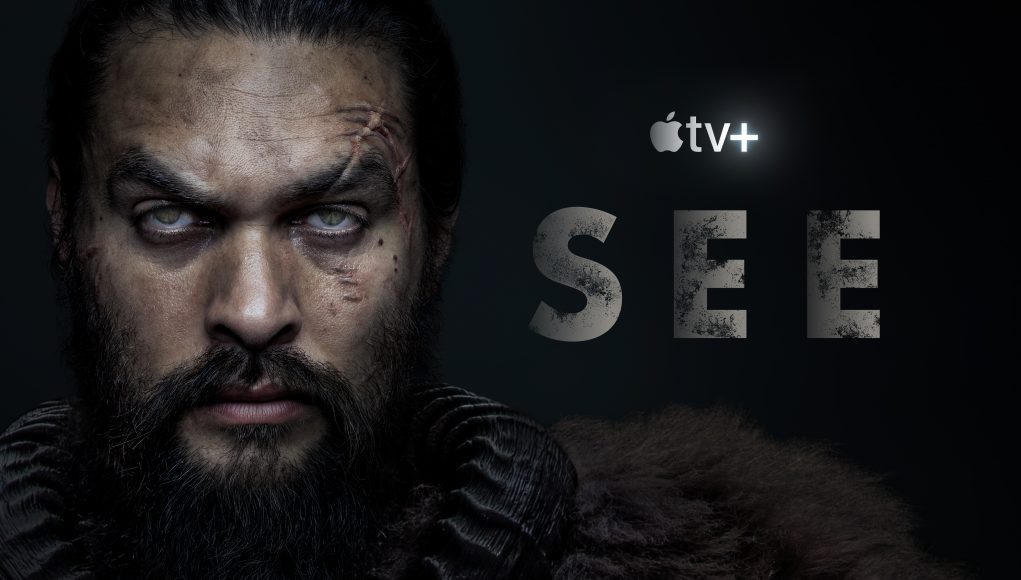 Jason Momoa is back on television in the Apple TV+ original series See. Game of Thrones made Jason Momoa a star and now he’s a superhero in Aquaman. See finds Jason Momoa in action too, 600 years into the post-apocalyptic future in which a virus has rendered any survivors blind.

Baba Voss (Momoa) leads his tribe the Alkenny against vicious monarchs and enemy combatants, all by the sense of touch, smell and hearing. Momoa spoke at a press conference for See in Los Angeles and Gonzo was there to ask him a question. See premieres Friday, November 1 along with all the new Apple TV+ original series.

Gonzo: The eyes are a major tool an actor uses. When you’re playing a character who’s blind in a world of blindness, do you use that tool differently?

Jason Momoa: It was very challenging because day one, the lenses are very wide and large format so the camera can be really right here. When the camera’s right here, I’ve got nowhere to look. So it’s tough because you cannot lock in on something. It’s extremely challenging. Obviously [blindness consultant] Joe [Strechay] trained us to see everything around us. I’m straying off because I’m like that. Look, squirrel. I’m not sure if I’m answering your question, but the hard thing is like right now, having a conversation with someone. You come back home and I’m like, “Hey, honey” and you don’t actually look at them. You’re just hearing. I’m looking at you by listening this way, so whenever I’d have a conversation with someone, you just come back to life and you’re not actually making eye contact anymore because you’ve been seven months on a show trying to get rid of this. So how I use my tool? You want to stop it. You need to keep ‘em open and not see. That was the beautiful part about it. We’d do a scene and [the director is] like, “You going to do it that way?” Like, yeah? And you’re like, “I love it, good.” 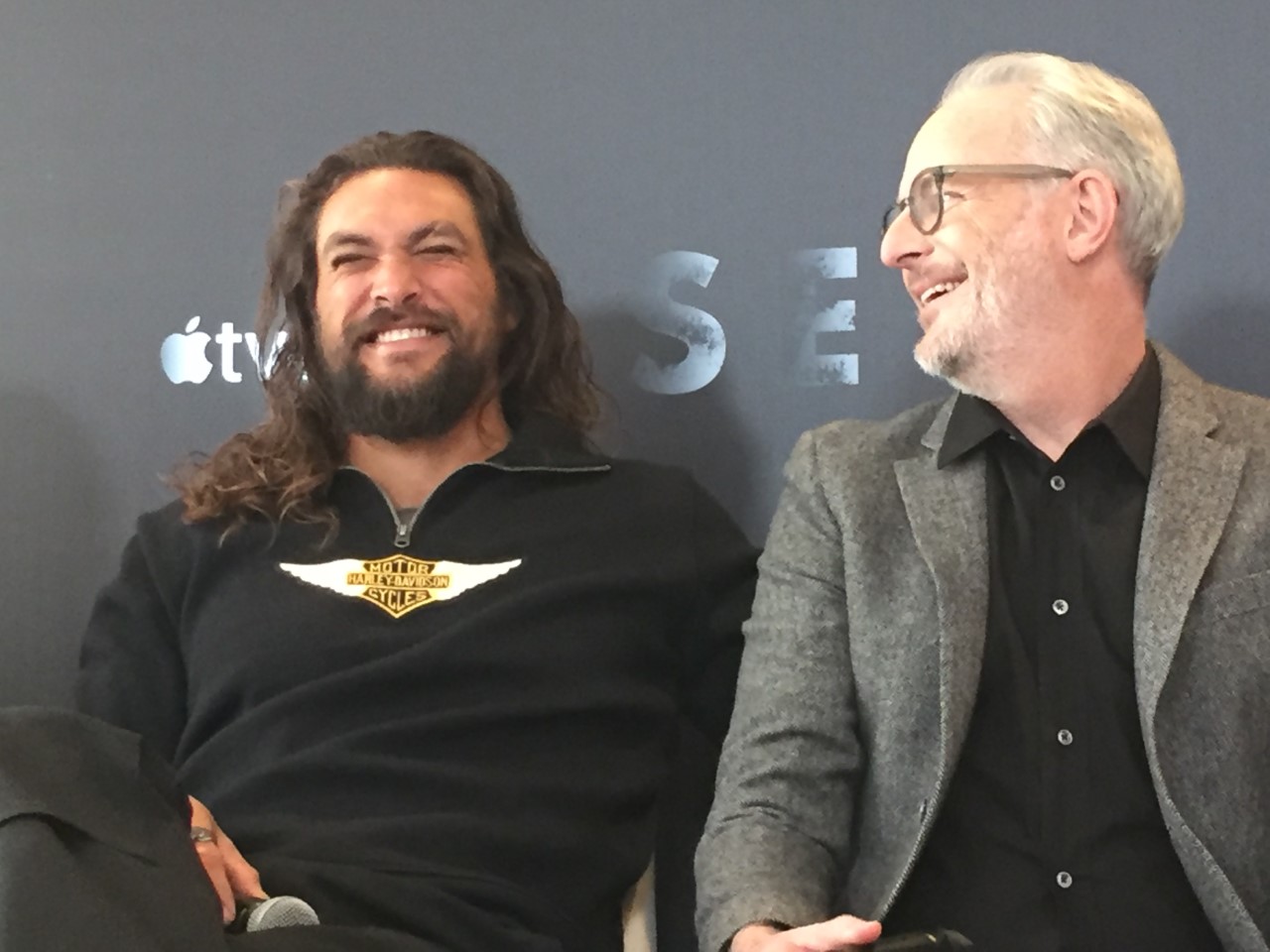 Q: What did you imagine when you first got the script and did See end up what you expected?

JM: I was on a train from Cornwall to London, just wrapping a show I was doing. My agent sent it through. He said, “I want you to play this role. Check it out.” I read it and I was with all my best friends that I’d hired on this other show, so I was literally with the best of the best in my life as actors, but I had a long train ride. It was the first time I’d ever read it out loud and all my friends were riveted. I actually called Brandt after about page five. It was like, “Get me in, this is mine, no one’s going to beat me, this is my role, I got it so just put me in.” Really what it came down to is they put me in a meeting with Peter Chernin and Jenno Topping. It was my first meeting and I really didn’t know too much about it, just that I’ve read it, I loved it, I was just very passionate about it and had a bunch of ideas and became really, really close and had a great time with Peter and you. And then they introduced me to Francis [Lawrence] and I just went in there. It was just like verbal diarrhea. I just went off in the room. I was just so excited. It was probably the best script that I ever read and all these things just kept flying in. It was just born. It was born in me and I was like, “Thank you for writing this for me. No one else can do this. I’m not normally this cocky but I’m like seriously, I will take on anyone. This was it.”

Q: What surprised you to learn about playing blind?

JM: Every day was kind of a new thing. From one instance, we were walking down a river and I just kind of realized while we were shooting, the way that I walk is kind of like a cross. I was just kicking the water. I could just hear it and it can hit things so I went back to Joe, I’m like, “Oh, I found something.” I was really excited. So you train really hard and then you find it in the field. That’s kind of the thing. You learn the basics and then you can add a little flair when you want to. One of the really interesting things, because I’m not a big fan of school or learning, so I was forced. First off, you’ve got boot camp. I got boot camp with your ideas, you’ve got to find your moment. It’s been very supportive. Just check it out. You don’t have to do it. You really know how to talk to people. It’s not your ideas. You’ve got yours. So you just let me go, all right, cool, check it out. Obviously I’m going to meet with Joe because of his experience but we had some other stuff that we would do with another trainer that was just challenging for me. But what I found is that we would just talk about, for instance, me and my wife. Just using her sense so since we have no vision, I don’t know what she looks like.

Q: Why did you fight for this role so hard?

JM: I am a father. I have two children, they’re almost teenagers. I’m married for 14 years so what it’s like to be a father and I never get to have that experience [in a show], and then what it’s like to lose everything. He can’t keep his family together. Obviously, it’s impaired and he’s crumbling inside trying to keep his family together and survive this gnarly world. That’s beautiful and so in all my characters, I’ve never gotten to that. It’s either his family was murdered and now this is the repercussions and he’s just pissed. But now it’s like this is it. This is everything so now I’m like I’m done, ‘til the next one. I really, really, really love this role because I got to exercise all these beautiful things inside of me as an actor that I’ve never been able to do before.