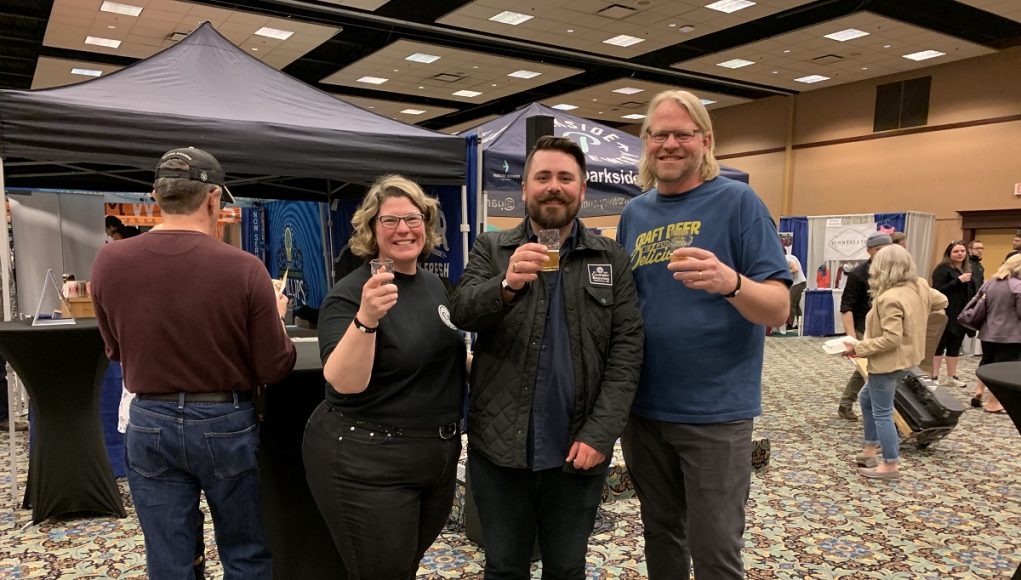 Every Beer Has A Story at Penticton Fest of Ale

Last suds are washed away on another wildly successful Okanagan Fest of Ale. A record-breaking 75 BC-based craft brewers overflowed the Penticton Trade and Convention Centre.

John Cruickshank, Okanagan Fest of Ale Society (OFOAS) President, noted that 19 breweries were new to the event and 8 craft cideries participated to pour more than 225 craft beers and ciders. Fabulous live entertainment and delicious food complemented the festivities. “We are always very fortunate to attract some of the best brewers and cideries to the event as well as guests with a keen interest in craft beers and ciders. Given that net proceeds from the event go to charity, everyone benefits.”

The Okanagan Fest of Ale Society has gifted over nearly $700,000 in net proceeds back to the community since 1996. Charitable grant applications for 2019 will be available online June 1 to 30, 2019.

Fest of Ale provides an opportunity to explore what’s trending in craft beer and to revisit old favourites. Continuously enhancing the event, the OFOAS in recent years added the feature of a pop-up shop – this year presented by Clancy’s Liquor Store. What a bonus to find a special craft beer in the tastings and then be able to purchase it to take home.

For those interested in joining a community of likeminded craft beer lovers, CAMRA (Campaign for Real Ale) South Okanagan was there to explain the benefits of membership and to sign up recruits. For more information on discounts at various outlets and CAMRA events, see www.camraso.ca.

It’s exciting that Fest-of-Ale spills out into the community. I was invited to the Thursday adjacent event hosted by Bad Tattoo Brewing, “Every Beer Has A Story” with Joe Wiebe, the Thirsty Writer.

I first met Wiebe on a media tour when he was working on his BC craft beer masterpiece, Craft Beer Revolution: The Insider’s Guide to B.C. Breweries. Blown away by his wealth of knowledge, I snapped up his book as soon as it was published and have used it as a guideline in visiting breweries ever since. Wiebe is also co-founder of Victoria Beer Week and the BC Ale Trail.

Who wouldn’t want to spend an evening sipping samples of some of his favourite BC beers while he shared what he has learned? He highlighted six different beers as we tasted them, telling us about the style of beer, the brewery and the story of how they came to brew that selection. Included were Helios Dortmunder Golden Lager, Hoyne Brewing, Victoria; Cloud Data Hazy White IPA, Category 12 Brewing, Saanichton; 7800 Saison, Townsite Brewing, Powell River; Reynard Oud Bruin, Strange Fellows Brewing, Vancouver; 10º Dageraad Brewing, Burnaby; and Rye’d with Everton Rye Pale Ale, Bad Tattoo Brewing, Penticton.

My favourites in those samples were from Category 12 Brewing and Hoyne Brewing. The people’s choice from the room, though, was the Bad Tattoo Brewing selection, which admittedly was mighty fine. Getting the vote meant a lot to guest brewer Warren Everton who had created it in a special collaboration with Bad Tattoo.

This was the fifth year Wiebe presented at Bad Tattoo on the preceding Thursday – each time, different craft beer selections with a unique angle to the session.

Another regular adjacent event is Murders Row Cask Event at Kettle Valley Station Pub on the Saturday night after Fest-of-Ale closes. This year 17 special casks were featured along with live entertainment.

Fest-of-Ale provides an unparalleled opportunity to learn about all of the different producers and the stories behind the selections being poured. Here, too, you can vote for your favourites through the People’s Choice and see how those choices stack up against the industry experts’ choices in the Judges’ Choice Awards.

Timber Child artisans hand-crafted the awards which were distributed as follows:

Mark your calendar to celebrate the 25th Anniversary, Okanagan Fest of Ale 2020, April 17 and 18. For details and tickets, see www.festofale.ca