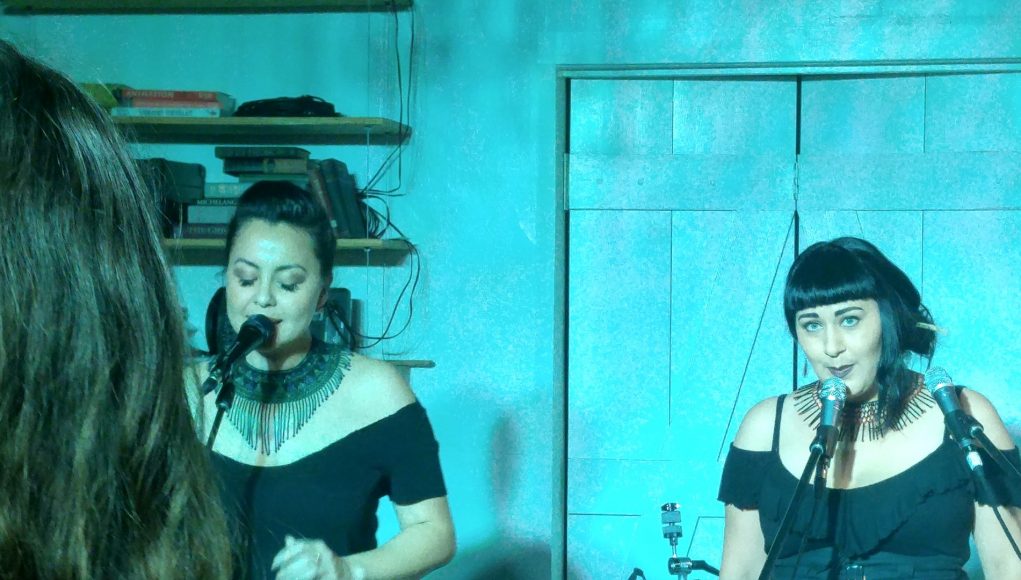 Last night, as the autumn wind picked up and the leaves whipped my face I found myself on a mission to see as many acts as humanly possible during BreakOut West’s first big festival night that landed at a handful of venues in Kelowna, BC’s downtown core.

Much to the chagrin of localites looking for a cold drink on a cold night, most venues including Milkcrate Records, Doc Willoughby’s, Fernando’s Pub, The Grateful Fed, DOJA Culture Cafe, BNA, New Arts’ Collective, Craft Beer Market, Munnin’s Post, and Sapphire Night Club were filled to capacity by 9pm.

“What is going on?” a passerby asked upon seeing the lineup that went down the street at Doc’s. When she saw my lanyard pass she asked: “Can you get me in? I just want a beeeeer!”

There was so much more happening in our local venues than just beer drinking. And it was refreshing. A couple more steps down the road and I bumped into Kyle Haynes owner and manager of local artist collective Legion HQ.

“This is amazing. Why isn’t every night like this in Kelowna?” he said before hailing a cab to get to BNA on time for the next show.

I carried on and hit up Nuela Charles for my first sidewalk dance party outside of Milkcrate Records. Her neo-soul sounds caressed my ears, and with a stellar group playing behind her, my dancing shoes couldn’t help but start to move.

“This is awesome,” said local poet Erin Scott, who was standing next to me outside grooving along with everyone else in line. “All the folks in there on their cell phones should be kicked out. At least our outside dance party is bumpin.”

A quick brisk walk around a corner landed me at Fernando’s at-capacity lineup where regular doorman Clint reassured folks from near and far that we’d get in eventually.

“I mean, c’mon guys, I’m not even letting in the lady who gave me the button I am wearing,” he said, as he pointed in my direction and then up at Mountain Sound’s first round of DIY button making, pinned to his ball cap.

So the line waited. I stood and laughed with local artist and BOW volunteer Max DeJong who sported a chicken hat, and soon my drummer and owner of the NAC Dylan Ranney showed up. Karma Lacoff the chair of the host committee for BreakOut West, she showed up with her mother and none other than Odario Williams.

“Excuse my ignorance, but who are you?” I asked Williams, “and what do you?”

Ranney look at me like, are you serious? And Williams cordially answered:

“I’m the host of Afterdark, a CBC radio show out of Vancouver.”

“Oooooooh, your voice, I’ve listened to your voice late at night,” and then realized the implications were definitely worthy of everyone’s laughter.

Booking manager for Fernando’s Pub Art Szabo came out and personally brought us all in to watch local musician, composer, and colleague Andrew Judah share his always stellar and technically perfected performance.

From there, I headed over to the NAC with Ranney to see how the night was going.

As I walked in the door, up the big stairwell, and around the corner into a packed well-lit room, my sister who was working bar, texted me: “Lei, where are you? You have to come now. There are throat singers.”

I giggled at the fact that the small room was so thick we couldn’t see each other, and was quickly captivated by the most intense performance by Quantum Tangle, a group from waaaay up north in Yellowknife that plays music entrenched in Inuit tradition.

I sat, I watched, I listened, and I tried to figure out who was making which throaty guttural choir-like sounds. Their storytelling was incredible and I’ve included a snippet of Amoutalik, a piece in which main singer Tiffany Ayalik transforms into a she-creature who roams the Arctic looking for children to snatch up and eat.

Upon leaving the venue betwixt shaking hands with one of the Ponderosa Festival owners, I found the members of Quantum Tangle outside waiting for a ride.

“Excuse me,” I said, “that was awesome. How do you physiologically do what you do? I mean, how do you throat sing?”

“Hi, thanks,” said Ayalik looking up from her cell phone. “It takes a lot of years of practice, and a ton more years of oppression.”

“Well, I’m grateful,” I said, retrieving her gaze, caressed with a huge smile, a communal cackle, and more exchanges of gratitude.

Onward I pushed through the cold night air. It was like any old festival. Wherever you walked, you were bound to hear something amazing.

Earlier in the day, I had a chance to sit down for a panel discussion with several international big wigs including the label that supports Tanya Tagak, who will perform tonight at the Kelowna Community Theatre with the Okanagan Symphony Orchestra, at 7:30pm.

One more BOW festival night to go! Get your wristbands ready and get out early to make sure you catch as many amazing nationally and internationally known acts on BOW’s last festival night.