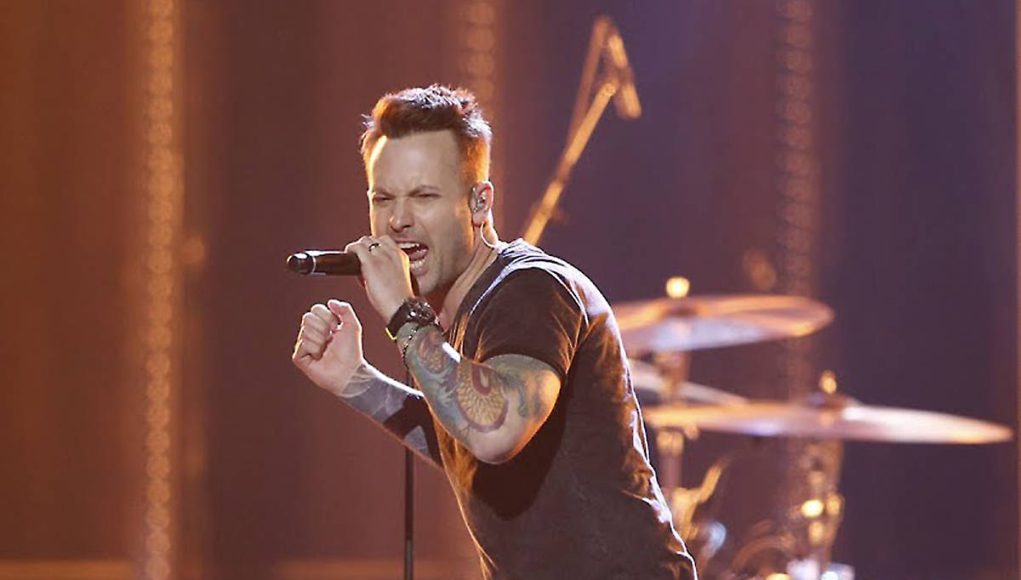 Multi-Platinum award winning country star Dallas Smith has announced the details for his long-awaited return to the road with the 2022 Some Things Never Change Tour kicking off in May. 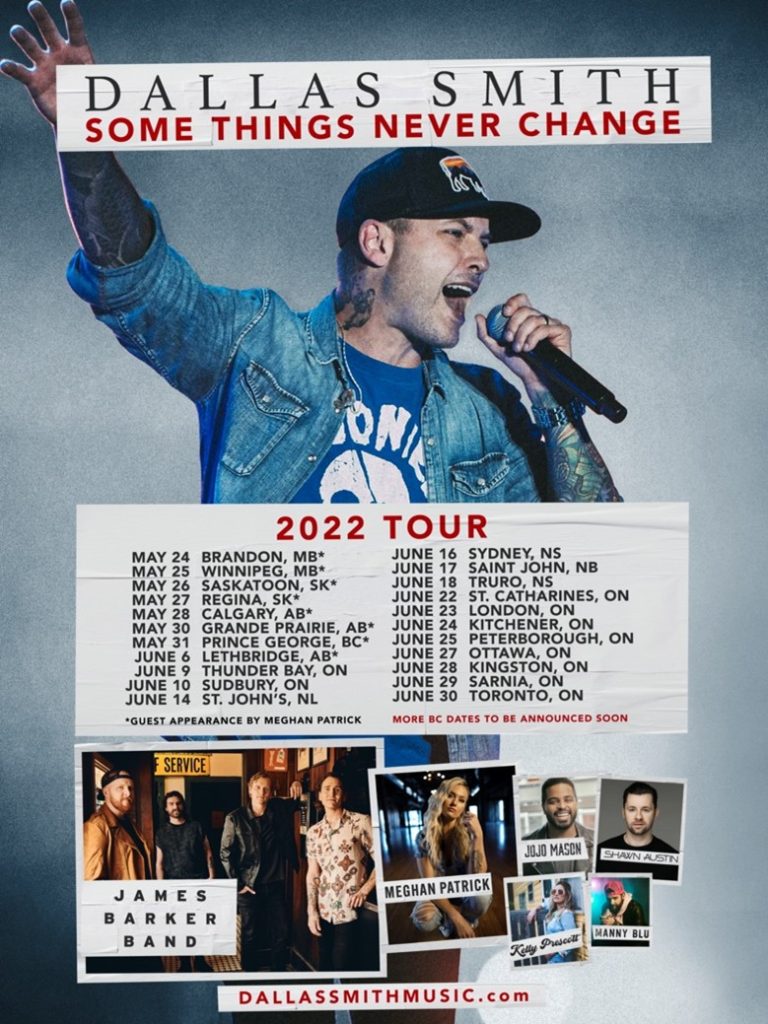 The Some Things Never Change Tour 2022 with James Barker Band and special guest Meghan Patrick plus emerging country artists Shawn Austin, JoJo Mason, Kelly Prescott, and Manny Blu will kick off May 24 in Brandon, MB, and head to over 20 cities including Winnipeg, Saskatoon, Regina, Calgary, Halifax, Kitchener, London, Ottawa and more before wrapping at Budweiser Stage in Toronto, where Smith last performed in 2019 in front of a sold-out crowd of 14,000+.

See below for full presale details or visit www.DallasSmithmusic.com. $2.50 will be added to the cost of each ticket to go towards Canadian mental health charities and services, on behalf of the Lifted Dallas Smith Charitable Foundation – a non-profit organization committed to ensuring that mental health services are accessible to anyone and everyone in need.

Visit www.DallasSmithMusic.com for more information and watch for additional dates to be announced soon.

May 24 – Westoba Place at the Keystone Centre – Brandon, MB*

A multiple JUNO and CCMA Award winning entertainer, Dallas Smith is one of the most celebrated artists in Canadian Country music. Amassing 18 CRIA gold-certified singles, three CRIA gold-certified albums, and four CRIA platinum-certified singles along with more than 500 MILLION collective streams to date and 2 MILLION global album equivalents. Smith is also the first and only Canadian Country artist in the Nielsen BDS era to have ELEVEN #1 singles, including four consecutive chart-toppers from the same album, and closed out 2019 as the most played artist (domestic/international) at Canadian Country radio for the year. Adding to the list of accolades, Smith is the sole Canadian Country artist in the Nielsen BDS and Mediabase era to earn ELEVEN #1 songs in history and have 22 consecutive singles peak in the Top 10 of the Country airplay chart. Smith is the two-time CCMA Award winner for Entertainer of the Year (2019/20), continuing to set the bar high for Country music in all that he does. In 2021, Smith launched the Lifted Dallas Smith Charitable Foundation – a non-profit organization committed to ensuring that mental health services are accessible to anyone and everyone in need.  Nominated for FIVE CCMA Awards in 2021, Smith will announce the national headlining Some Things Never Change Tour for 2022 (11/22/21) and release his brand-new single “Hide From A Broken Heart” on (11/29/21), following its national broadcast debut on the 2021 CCMA Awards (11/29).

James Barker Band have fueled an incredible story over the last six years, largely on their own, from playing opening spots in small Ontario bars to charting multiple No. 1 singles, garnering hundreds of millions of global streams, and headlining some of Canada’s largest country music festivals. Now, with new music on the way, the four-piece is continuing their meteoric ascent in Nashville. Made up of James Barker (lead vocals/guitar), Taylor Abram (guitar/background vocals), Connor Stephen (drums), and Bobby Martin (bass), the members of James Barker Band grew up within an hour of each other in rural towns surrounding Toronto. In 2017, they sent their single “Chills” straight to the top of Billboard’s Canadian Hot 100 chart. The upbeat anthem also achieved Platinum status, alongside other songs from their introductory LP Game On, earning them numerous national awards. In addition, these best-friends have already amassed another six GOLD-certified and PLATINUM-certified tracks which include “There’s A Drink For That”, “Just Sayin’,” “It’s Working,” “Lawn Chair Lazy,” “Good Together, and “Keep It Simple” (PLATINUM). Now, as the rising stars reposition themselves in Nashville, many miles from their hometowns, the opportunities are limitless – but the band remains grounded in their small-town roots. For more info, visit jamesbarkerband.com.

Meghan Patrick is one of the most exciting country artists today.  She is a JUNO Award winner, in addition to being a two-time CCMA Female Artist of the Year.  Meghan was the first solo female artist to take home the Fans’ Choice Award at the Country Music of Ontario Awards. She has been nominated for three Juno Awards including two in the Country Album of the Year category, winning her first for her EP WILD AS ME.  Her singles have adorned the radio charts and have included “Still Loving You,” “Country Music Made Me Do It,” “The Bad Guy,” and include her number one hit “Walls Come Down”.  Her most recent album, WILD AS ME features the Top 10 single of the same name.  In concert, she’s shared the stage with superstars like Old Dominion, Lady A, Dwight Yoakam, and Martina McBride.

Since breaking onto the Canadian country music scene over six years ago, 604 Records recording artist JoJo Mason has been on an incredible journey. In a career already full of highlights, Mason has earned five Top 10 singles, multiple CCMA Award and BCCMA Award nominations, an impressive 28M global streams to date and more. This past year Mason was presented with his first CRIA gold-certified record for ‘Better On You’; his highest charting and most streamed single to date, sitting at 6.5M streams and rising. This past August, Mason showcased his ability to capture audiences with his live energy while touring across Canada, including two days at the Lifted Hotel Festival in Vancouver BC, a charity benefit for mental health with all proceeds going toward Lifted, A Dallas Smith Charitable Organization. The conversation around mental health is close to Mason’s heart and prompted the weekly Instagram series hosted by Mason called “Mental Health Mondays” – a conversation with peers and industry professionals. Now, with a focus on his evolution as an artist Mason is ready to show his fans and the world exactly the kind of act he wants to be. With his latest single ‘Broken Umbrella’ climbing the charts and the October release of his seven song EP Sky Full Of Stars, Mason is looking forward to getting back on the road again, making memorable connections and entertaining fans.

With 23 million collective streams to date, Vancouver singer-songwriter Shawn Austin has worked tirelessly to cement his place in the Canadian country music landscape. Nominated for CCMA “Rising Star” Award (2021/2019), Austin was recently a season two finalist on NBC’s Songland, pitching Florida Georgia Line as a songwriting contestant, and his vocals have been compared to the likes of country superstar Brett Eldredge and Grammy-winning icon John Mayer. This year, Austin launched a new chapter of his career with a global label signing (Local Hay / Big Loud Records), and his new single “Tailgate To Heaven (ft. Chris Lane)” is climbing towards Top 10 at Canadian Country radio.

Kelly Prescott comes by her music in the most honest way possible, as a third-generation singer/songwriter on both sides of her family. Kelly and her family made their Grand Ole Opry debut as guests of Terri Clark in 2018. The past year has been a whirlwind for singer-songwriter Kelly Prescott since the release of her acclaimed EP “Love Wins.” The self-penned six song collection draws straight from her own heart, and just earned Prescott her first ever CCMA Award nomination for “Roots Album of the Year” and two CMAO nominations for “Album of the Year” and “Roots Artist of the Year.” In 2021, Kelly found her label home with Warner Music Canada. She has toured all over North America with such acts as Alan Doyle, Kyle Cook (Matchbox 20) Terri Clark, Dallas Smith, Jim Cuddy, Colin James, Dean Brody, her former band The Claytones and performing as Emmylou Harris in the theatrical production of Grievous Angel: The Legend of Gram Parsons.

Raised as a versatile athlete who played hockey, soccer, and football before kickstarting his M.M.A. training at 16 years old, Blu hasn’t lost that fighting spirit. If anything, he’s gotten stronger and is learning new ways to roll with the music industry punches. In 2020, despite pandemic restrictions, he had a landmark year as “New Ink” allowed him the opportunity to be seen in the country music community. Throughout 2021, Blu’s social footprint on TikTok has grown to a record of 2.5M+ and his YouTube series, which includes his “Live & Turned Up” concert series, has a record of 1M+ views. The promising artist has expanded his team to an international level through added representation in the U.S. and the U.K. He is currently on tour with his new EP, playing shows in both the U.S. and Canada. Ultimately, with his 2021 release, Blu is taking his career to the next level. “DEViL” with its hard-hitting hooks and country rock edge, is the soundtrack to drive his career even further and Manny Blu is ready to deliver a knockout blow.