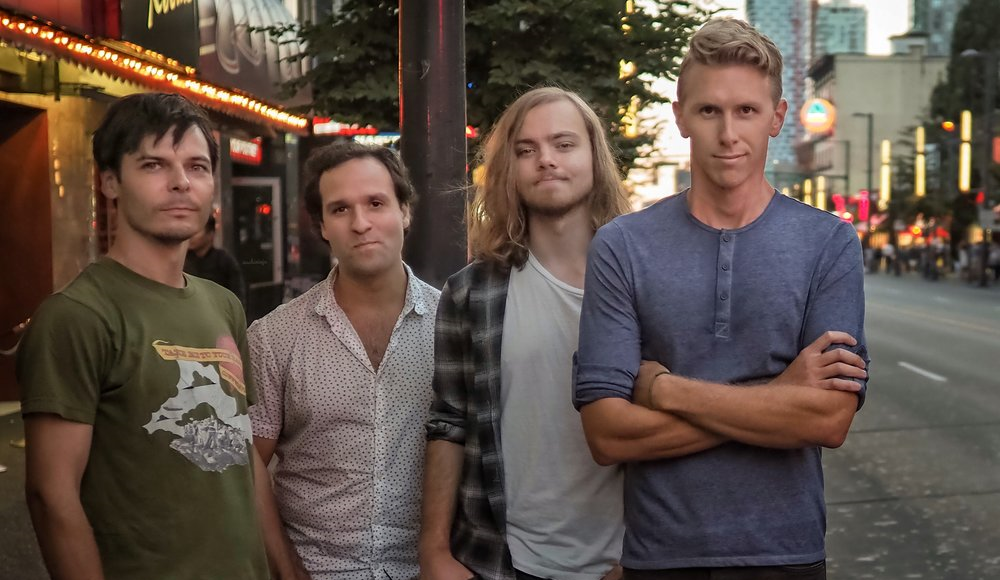 Colour Tongues, an indie, progressive-rock band based out of Vancouver is causing a stir with the release of their new lead single Southbound from their newest EP release Almost East. The band, comprising James Challis on vocals and guitar, Graeme Meekison on lead guitar, Dan Lavergne on bass, and Dave Taylor on drums have charted on CFMU- FM and CILU-FM out of Ontario and has been listed in Earshot Magazine’s National Top 50. Vancouver’s Daily Hive has also listed them as one of their top ten concerts to see in Vancouver. The release of Southbound takes them on the road once again… with a Kelowna date at our very own Doc Willoughby‘s on August 17th.

Tell me about the history of the band. How did you come together and get started?

James: Dan and I were the original members and in March of 2017 we began looking to add a lead guitarist and drummer. I met Dave at a party through his girlfriend. We bailed on the party and sat in his girlfriend’s room listening to all our old bands via YouTube and Soundcloud. I knew he’d be the perfect drummer for what I had been writing. I was always on the hunt for a technical drummer who could handle weird time signatures. Graeme was the last piece we desperately needed; I remember sifting through so many guitarists on craigslist. I listened to an EP he had made and thought he was way too progressive; he was this super talented kid with mind bending ideas. I remember thinking “would he even like my material?”. A couple of exchanges later we were sending each other videos of different ideas. Anything I threw at Graeme he could easily play. After a few jams we all knew this was it.

Who does the song writing? How does the band come together to write?

James: We usually start with the music and then structure it; the vocals are always last. Me or Graeme will have the initial idea and then together as a band we spend hours ironing it out till it sticks. Not all ideas make it and sometimes we all walk away from it; putting time and energy into an idea that we have to shelve or never use. It feels like we’re slowly assembling a jigsaw puzzle. Feel Right and Southbound had several versions.

The song Southbound has some deep meaning behind it (it tells the story of a friendship imploding under the pressures of long-standing emotional neglect and insidious hardships). Is this from a personal experience? Where did you find the emotional connection to write the lyrics to this song? And even though the lyrics are about hardships, the song itself is upbeat and gives the listener a happy feeling, was this something that was done with intention?

James: Yes, Southbound was based on a personal experience. I finished writing the lyrics in Australia while reflecting on how I fell out with an old friend. Originally when I played it acoustically in my bedroom the song felt more melancholic, when we added bass, lead guitar and drums it took on a whole new feel. It’s the kinda song you listen to when you hit the highway at 120 km an hour.

Colour Tongues has the reputation for putting on some high energy live shows which have led to some crazy partying by the audience. What is the recipe for getting your audience into a party frenzy?

Dave: Being on stage is like being in a relationship with the audience; there is a push and pull, and communication is really important. We’ve gotten much better at feeling the vibe of the audience. When they are ready to explode, that’s when you hit them with something upbeat and crashing like Southbound. When you can tell they need a bit of a lull to groove to, we bring things down with a softer beachy track called Tidal Wave. I find that really good bands have an emotional spread of music to draw from, and so it can interact with the audience in many ways, not just one. This is something that we are trying to cultivate in our song writing. We always have a planned set list, but I can’t count how many times we have changed it on the fly when it felt right. The audience can also tell when the musicians are having a good time and so if we really bring it on stage, you can feel it off stage. Just look at Graeme shredding his solos, or Dan bobbing up and down on a bass riff; that’s how you know we’re feeling it.

On August 17 you will be at Doc Willoughby’s in Kelowna. What do you like about touring through Kelowna? Do you have any stories to share about past Kelowna shows?

Dave: We are big fans of Kelowna. I remember when we first showed up there in June 2017 James was all excited about this vegan restaurant called Naked Cafe. No one else in the band is even vegan but now we’ve ended up eating 90% of all our meals there because it is so good.

Our past show at Doc Willoughby’s had a really energetic crowd who were really feeling the music; you don’t always get that in a town you haven’t played in much. You’ll notice a lot of the footage from our music video was from that night. Everything about it was electric. I’m also pretty sure Dan met his current girlfriend at Doc Willoughby’s 15 minutes before we had to go on that night. I remember running around at sound check being like “Where the heck is Dan!?” We’re checking levels; he’s there in the corner on a date while we’re trying to set up for a rock show.

Speaking of touring… How does that band get along while being on the road? Who is the responsible one that keeps things on track? And who is the bad boy of the group?

James: We have a rare dynamic, there’s no ego. Everyone shares the workload and we just enjoy the journey. We all know touring is the best part of being in a band, so we take advantage of it all. Dave and I are the ones who keep everything moving, we all treat it like a job we love.

Dave: No one is really the “bad boy” of the group, so we’ll just say it’s Graeme because he shreds and has luscious hair. On the road there is a glimmer of our 12 to 16-year-old selves coming out because we are all living these adolescent fantasies about being a rock band on tour. My fantasies never had the glitz and glamour of being a stadium band, selling out the Air Canada Centre or Madison Square Gardens; I always pictured a DIY kind of adventure where its just us and the road.

James: We’ve played some great shows, we’re constantly surprised by the response we get it in small towns. They’re super welcoming and just want to party, when the crowd is having fun, we’re having fun. The worst gig I played was when I lost my voice in the 2nd song and we still had a whole set to play.

Dave: Worst show for me was when I played a show the day after surgery. It was epic, but painful. Some of my favourite shows have definitely been The Fox Cabaret and Biltmore in Vancouver, Doc Willoughby’s in Kelowna, Broken City in Calgary and of course, the infamous Salmo Hotel in Salmo. That place is insane in the best way possible.