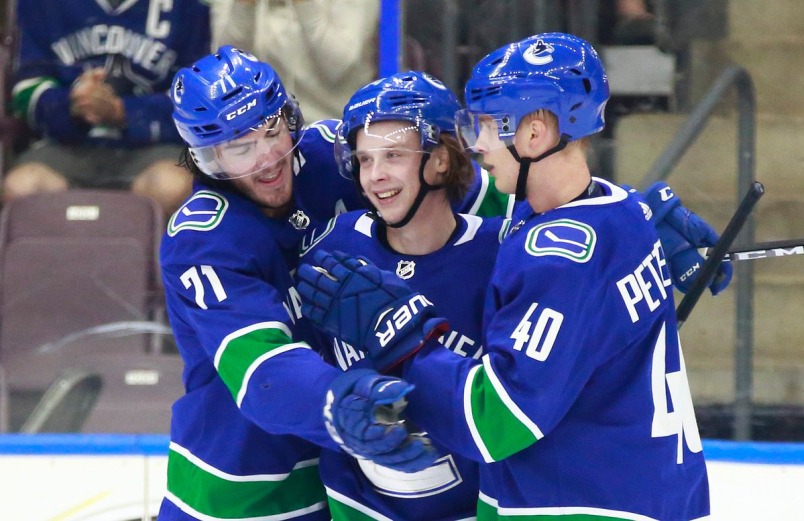 The highly touted Canucks’ prospects did not disappoint. Fans quickly learned it was worth the wait to see the likes of Elias Pettersson, Jonathan Dahlen, Kole Lind and co. in Canucks uniforms.

At this year’s instalment of the tournament, Winnipeg played the host team Vancouver twice. The first game was dominated by Vancouver. Adam Gaudette got the Canucks on the board early in the first. Vancouver exploded in the second with 6 straight goals to put them up 7-0. This included a slick breakaway goal by Jonathan Dahlen. Pettersson not to be out done by his countryman, fired a shot which found the top corner of the net.

By games end, the final score was 8-2. Canucks’ second round pick and Team Canada World Junior Team member Jonah Gadjovich finished the night with two goals. 5”6 Finnish winger Petrus Palmu also netted two himself. Former Kelowna Rockets forward had two assist on the night playing on a line with Pettersson (2G, 1A) and Dahlen(1G, 2A) who stole the show with three points each.

In Game 2, the Canucks got started out just how they had left off after the first game. Goals by Gaudette, Dahlen and Pettersson put them up 3-0 after the first period. However, the Jets would battle back this time scoring three times in the second period to pull even.

In the third period, tournament invitee and Vancouver Giants defenseman, Kaleb Bulych, would push the Canucks ahead with the go ahead goal off the rush.

A pair of empty net goals would seal the deal as the Canucks won game two 6-4 and completed the sweep of the Jets.

At the tournament’s end, Vancouver outscored Winnipeg 14-6. Canuck’s fans should be excited after seeing their prospects show off their skills. Teams will now head back to their respective cities for the start of training camp.

Adam Gaudette: The 2017-18 Hobey Baker award winner put his talents on display. With one goal and each of his two games and a solid defensive effort, a strong training camp could land him with a full time spot on Vancouver this season.

Elias Pettersson and Jonathan Dahlen: The slick swedes paired well with Kole Lind on their wing. The duo combined for 6 goals and easily were the best players on the ice. Both showed they can score goals and set up plays. TSN 1040’s Jeff Paterson warns Canucks fans to not compare Pettersson and Dahlen to the Sedin’s, although it’s a comparison that’s easy to make.

Olli Juolevi: The Canucks 5th overall selection in 2016 seems to have been marinating well in Finland. At the 2017 Young Stars Tournament, fans had high hope for Juolevi however he underperformed and faced criticism. He travelled back to his home country of Finland and suited up for TPS Turku. Being coached by long-time Canucks defensemen, Sami Salo, seems to have payed off for Juolevi. This year, he played the way Canucks’ fans expect. Albeit not flashy, he plays a smart, effective and mistake-free game.

Michael DiPietro: Standing at 6”, DiPietro is considered undersized, at least to NHL standards. DiPietro embraces the underdog role and battles hard. He never gives up on a play and has the ability to make desperation saves unlike others. That’s why he was the 2017-18 OHL Goalie of the year, and Team Canada’s projected starter at the 2019 World Juniors. His game shadows NHL superstar Jonathan Quick.

Leon Gawanke: Don’t worry if you have never heard of Leon Gawanke, most people haven’t.  The 6”1 German defenseman proved his abilities in Penticton. For me, what stood out about Gawanke was his skating; he moved around the ice smoother than any of his peers. As a 5th round pick, he is somewhat of a dark horse to make the NHL, however he didn’t play like a 5th round pick last weekend.

Logan Stanley: At 6”7, 230 lbs, Stanley is hard to miss. The Waterloo native plays a shutdown role, and he does it well. Watching Stanley this week it is easy to see why Winnipeg took him in the 1st round in 2016.