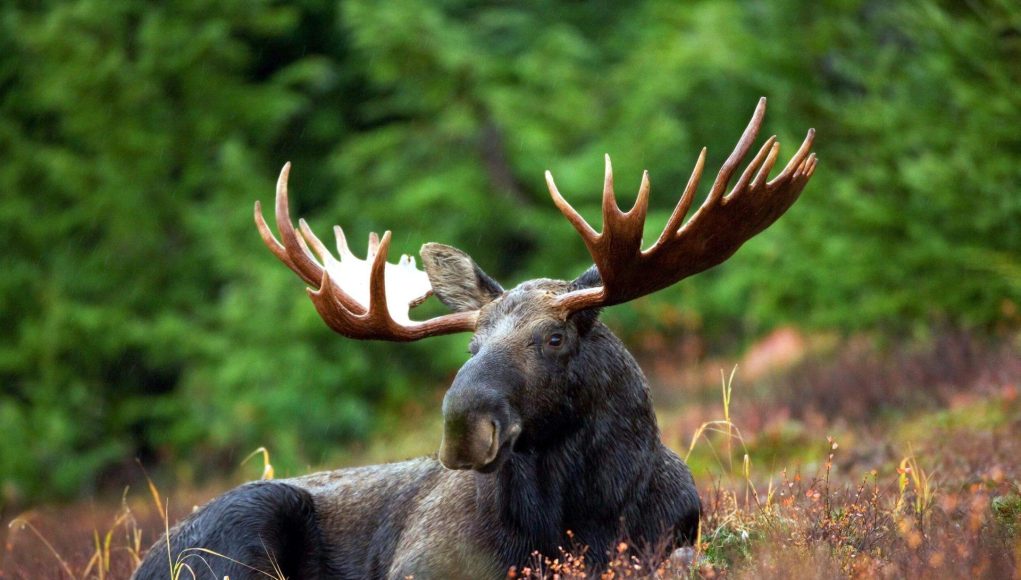 Moose management in Canada is unique compared to other wildlife management. The primary driver of most species’ decline in Canada is habitat loss and fragmentation. Yet moose enjoy the new browse that springs up after an area has been disturbed, so it’s long been thought they benefit from industrial activities like clearcutting. Because moose are widely hunted, provinces and territories are charged with managing their habitat, ensuring healthy populations and granting tags to hunters.

Although Canada hasn’t assessed moose as at risk nationally, reports are increasing of their worrisome decline in many provinces. Governments cite myriad factors, include disease, climate change, parasites and habitat alteration.

“The population is, in my opinion, heading toward a crisis and if the decline isn’t stopped it could create a situation from which it may take decades to recover,” retired Ontario moose biologist Alan Bisset writes of his province. “If it gets low enough, predation and unregulated hunting could keep it from growing at all, or worse, result in local extinction.”

Since governments control the hunt, decreasing the number of seasonal hunting tags seems like a straightforward way to reduce at least one pressure moose populations face. Yet Bisset’s proposal to reduce moose tags also reveals a social dynamic that complicates management, as he recognizes this will likely incur backlash from hunters. “Moose are being managed by hunting interests for hunting interests with little apparent concern for the future of the herd or the interests of other Ontario residents,” he writes.

Although Canada hasn’t assessed moose as at risk nationally, reports are increasing of their worrisome decline in many provinces.

Of course, many responsible hunters support strong management and protection measures. The conservation movement was initiated by hunters to ensure sufficient habitat for preferred game species. But some are also deeply invested in their right to hunt and view hunting limitations as an inherent threat.

In fact, the right to hunt belongs to Indigenous Peoples, and they’ve been among the loudest voices calling for change recently. Many consider moose a cultural keystone species. This summer, the Tŝilhqot’in Nation in B.C. issued a news release, “condemning the B.C. government’s destructive moose harvest allocation for the Chilcotin Region in recent days and expressing its opposition, in the strongest terms, to B.C.’s drastic escalation of Limited Entry Hunts (LEH) for moose in Tŝilhqot’in territory.”

Moose decline also played a significant role in the landmark legal case between Blueberry River First Nations and the Province of B.C. in 2021, and its precedent-setting ruling. Blueberry River community members argued that moose and caribou — which they rely on for sustenance — became increasingly scarce at their usual hunting grounds in the territory in conjunction with high levels of cumulative industrial disturbance approved by the province, and that this reflected the province’s failure to uphold their treaty right to hunt.

Moose decline also played a significant role in the landmark legal case between Blueberry River First Nations and the Province of B.C. in 2021, and its precedent-setting ruling.

The case brought moose habitat needs, and the impacts of industrial activity on them, into sharper focus. Research reveals that moose rely on forests for parts of their life cycle, and that clearings and roads increase hunter access, sightlines and success rates. As Bisset observes regarding Ontario, “In essence, the numbers of tags have never regulated the kill over most of the province. The kill depended on how many moose were vulnerable and exposed to gunfire or arrows.” Scientists called as witnesses for Blueberry River First Nations in B.C. testified that large-scale forest change was having negative repercussions for moose populations.

After reviewing the evidence, the judge ruled in favour of Blueberry River, explaining: “While the Province relies on the ‘early seral forage’ created after logging to say that such disturbances benefit moose, they do not acknowledge the limiting factor created by a lack of effective winter habitat/old forest. I conclude the evidence establishes that the moose declines are the result of anthropogenic [human-caused] disturbances, including industrial development impacts upon habitat.”

The Blueberry River ruling set legal precedents and made clear that new governance and decision-making systems are needed to manage lands and waters in ways that uphold treaty rights and ensure wildlife abundance.

It’s time for governments to provide better management and protection for moose populations and the habitat they depend on, including stricter hunting restrictions. This won’t make everyone happy, but it will provide food security for Indigenous Peoples, benefit other wildlife and ensure healthy moose populations.