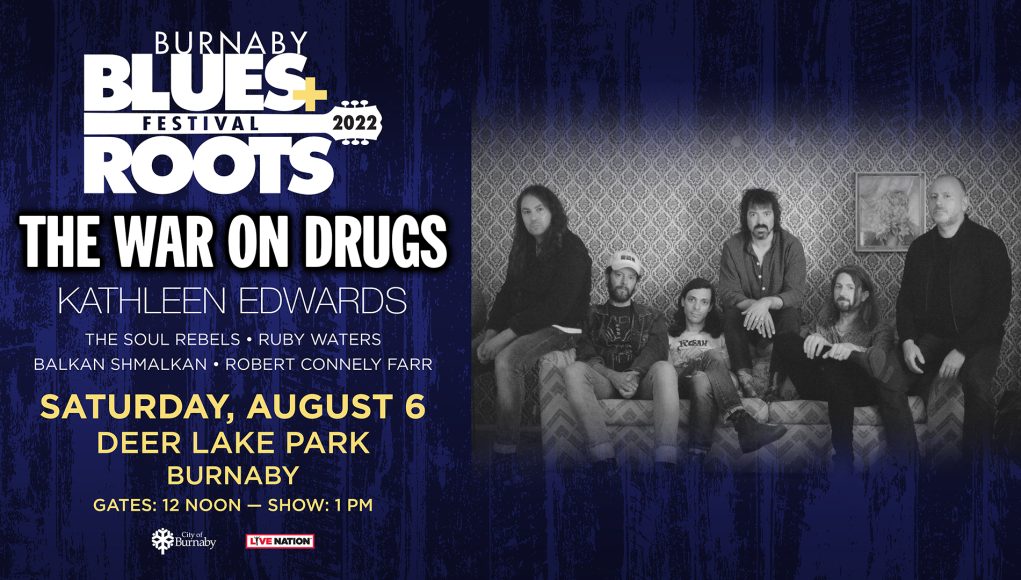 Burnaby Blues + Roots Festival is back

After a two year hiatus, the annual Burnaby Blues + Roots Festival is back this year with their highly anticipated lineup for 2022.

Returning to Deer Lake Park on Saturday, August 6, the festival will be headlined by Grammy-award winning rock band The War on Drugs.

It will also feature performances by Kathleen Edwards, The Soul Rebels, Ruby Waters, Balkan Shmalkan and Robert Connely Farr.  For over 20 years, Burnaby Blues and Roots Festival has welcomed all ages for a day in the sun filled with food, music and family.

Tickets on sale Friday, May 13 at 10 am
at www.burnabybluesfestival.com. About The War On Drugs
On The War On Drugs’ 2017 album A Deeper Understanding, Adam Granduciel sang about wanting to “find what can’t be found.” In a way, the history of this band has been a chronicle of their frontman’s ongoing search for greater meaning. Along the way, they’ve grown with each record. In the aftermath of A Deeper Understanding, they won the Grammy for Best Rock Album and were labelled “the best American ‘rock’ band of this decade,” by The New Yorker. They released their latest album I Don’t Live Here Anymore in 2021, which was met with critical acclaim.

By any metric, The War On Drugs have made it. They are now firmly embedded in the classic rock lineage. And yet the quest for that ineffable something continues.

About Kathleen Edwards
Kathleen Edwards is a critically acclaimed Canadian singer-songwriter. Her fifth studio album Total Freedom was described by Rolling Stone as ” the result of profound self-reflection from Edwards, who’s reached a place where her past trials, false starts, and wrong turns have begun to feel less like a burden and more like a blessing.” She has been praised for her vulnerable songwriting and storytelling

About The Soul Rebels
New Orleans-bred staple THE SOUL REBELS expand musical boundaries with an unwavering commitment to originality and innovation through genre-bending songs and performance collaborations with the likes of Katy Perry, Nas, Metallica, Big Freedia and G-Eazy.

About Ruby Waters
Critically-acclaimed Métis/Slovakian singer-songwriter Ruby Waters, often praised for her unique, raspy voice, has quickly garnered attention as a fast-rising indie alternative artist over the past two years. She mixes modern tempos and catchy guitar riffs with a decidedly unrefined approach to every song she makes, maintaining a signature raw energy. Her most recent EP, If It Comes Down To It (Oct. 2020), received worldwide acclaim, and features the single “Quantum Physics,” which amassed over 3 million streams in just 6 months, setting the bar for what’s to be expected from the young, soulful artist. In the same year, Waters peaked at #5 on Canadian Alternative radio and Rock radio with the single “Supernatural,” all of which culminated in her being chosen as Spotify’s Radar Artist at the end of 2020. Ruby Waters is strongly positioned for a fast ascension, with no signs of slowing down.

About Balkan Shmalkan
Balkan Shmalkan is East Vancouver’s sweet dance party orchestra; think global music with local attitude. Their funky brass dance beats are rooted in the living aural traditions of the Roma and Klezmorim of Eastern Europe and blended with a mixture of pop, funk, and jazz. Members of the group sing in 6 languages including Serbian, Romani, and Italian. The band is currently getting ready to release their first studio album in the summer of 2022.

About Robert Connely Farr
Singer-songwriter Robert Connely Farr (2019 Maple Blues Awards nominee for Songwriter of the Year & New Artist of the Year) grew up in the small southern town of Bolton, Mississippi, home of Charley Patton & The Mississippi Sheiks. He is a protege of Jimmy “Duck” Holmes – the last of the original Bentonia blues men . Farr currently resides in East Vancouver, BC & when he’s home in Mississippi – can usually be found at Duck’s jukejoint the Blue Front Cafe.

About Burnaby:
Burnaby is it’s the third-largest city in the province and is known for its beautiful surrounding natural environments and diverse culture. Since 2000, the Burnaby Blues + Roots Festival has been a highlight of the outdoor concert season for fans of all ages. For additional information, visit www.burnaby.ca.