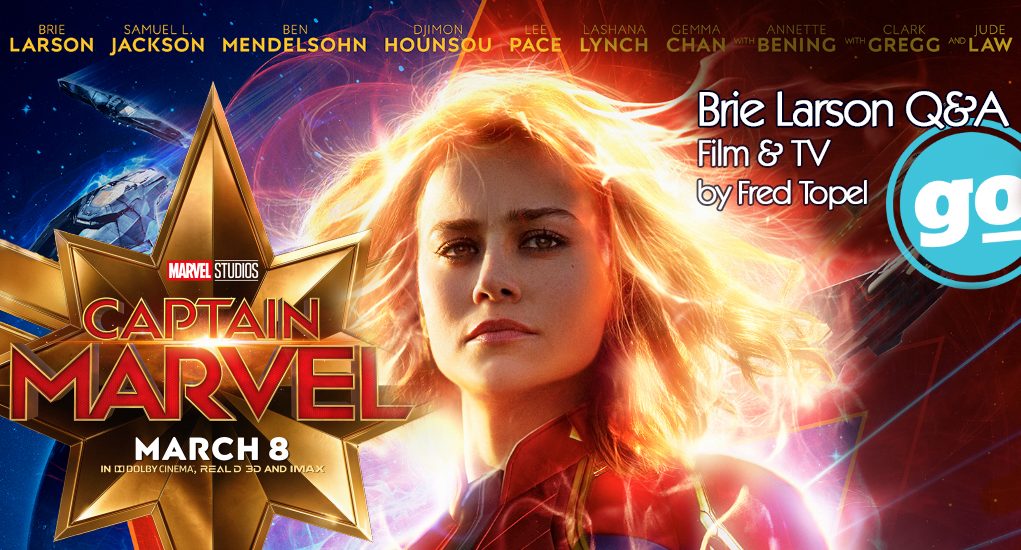 Brie Larson has been one to watch for a long time. If you didn’t see her gut wrenching performance in Short Term 12, you should, as well as moving roles in The Spectacular Now, Rampart and TV’s United States of Tara. Her Oscar win for Room made sure everyone would see that Brie Larson is a superhero.

So Marvel literally made her a superhero. Larson plays Carol Danvers in the movie Captain Marvel. Danvers returns to Earth in 1995 with vague memories of Air Force training and her friendship with fellow pilot Maria Rambeau (Lashana Lynch), but she also brings along her photon blasts she learned from the Kree in space.

Q: At what point in your research did you find Carol?

BL: Usually I prep for a really long time and I put myself in the feeling or experiences of the character to try to see how I react and try to become her in a way. Usually it’s super delayed for me. It’s usually my mom that points it out where she’s like, “Well, I think you’ve become somebody else” and then like two weeks later I’m like, “Oh shoot, I’m Carol now.” It’s always a little delayed for me. It’s not like I have this moment. I know some actors who have this moment where like, she’s arrived. I don’t have that and I think part of it is because I never want to feel like I have it or that I know her. It always feels a little elusive to me which is how you can keep trying and keep searching every day for a year. If you feel like you’ve arrived then it’s game over. I always have to feel like I’m losing it a little bit. There’s a lot to love about her which is why I was really excited to do this, and particularly the idea of playing a superhero and a female superhero, particularly because my interest is in female complexity, I was a little worried about playing a superhero that would be perfect because I don’t feel like that’s realistic or something aspirational at all. In particular, even with my job, you get to see this beautiful finished product where I look great, maybe in your opinion, but you don’t know all the other takes that are on the cutting room floor where sometimes I physically landed on my face doing stunts. Sometimes I just do a bad take. That’s just how it goes, so getting to play a character where the whole character arc and turn of this is watching her be this major risk taker, which means it’s not always going to work out the best. Those are the moments that define the moments of her character, where she doesn’t lay down. She gets back up. That’s everything. That’s for everybody. There isn’t a person who can’t relate to that, I don’t think.

Q: During training did you ever need something to inspire you to get back up, and where did you find that?

BL: Yeah, all the time. All the time. You think training that many hours every day for nine months, every day I was just like, “I’m amazing?” I sobbed in the gym many times. My trainer would be like, “Oh, she’s crying again. It’s very emotional when you’re stirring up something very vulnerable and raw inside of you and you’re also learning that it’s just for you. There was nothing for me to prove. I wasn’t proving it to other people at the gym. I certainly wasn’t proving it to my trainer because he was never going to be fully impressed. It’s his job to not be impressed. It was for myself. For me, the main reason for doing it was so that in moments like this when we were talking about Carol’s strength and we’re talking about what I learned form her, it’s that I’m stronger than I realized. Of course, this movie is like assisted movie effects because I can’t personally shoot photon blasts. There’s not enough prep in the world for me to do that. Yet, but I will figure it out if there’s a way. I can stand here and say that I am really strong. I was able to dead lift 225 pounds. I was able to hip thrust 400 pounds. I was able to push my trainer’s 5,000 pound jeep up a hill for 60 seconds. So this concept, when it comes to gender norms or what the human body is capable of, but particularly what the female body is capable of, it’s capable of a lot.

Q: What do you think drew Carol and Maria together?

BL: I think what they’ve gone through together, going through military training together, being the only women and then using each other to lean on each other through that type of support and recognition of their experience is really special. Of course, I think they would have been friends outside of that experience but I think that that’s a really tight knit bond that they have and they’re family. That’s kind of what we’re talking about in this film is without being too showboaty about it, this is the love of the movie. This is the great love. This is the love lost. This is the love found again. This is the reason to continue fighting and to go to the ends of the earth, for the person or thing that you love. It’s her best friend and her best friend’s daughter which to me is so natural. I don’t think there’s at any point, I went and saw the movie with some people, and it was like an hour later where they were like, “Oh, Maria’s the love.” I’m like, yeah. So it’s not like something that we made a big deal about, but it just feels so natural because that love is so strong and not just – if I’m going to brag about Lashana for a second because I love it – it’s like the movie shifts once she’s on screen because there’s a level of power that she commands in that. I was talking to people yesterday and a lot of people were tearing up talking about some of the speeches that you give because they were like, “I felt like she was talking to me. She was reminding me of myself.” Hello, that’s amazing. You couldn’t ask for anything better than that.

Q: You’ve fought for inclusion in Hollywood and even in the press participating in Captain Marvel. How does having more voices inform the way you bring these characters to life?

BL: It’s an interesting question because it’s not so specific as that. I’m not going to do anything for a specific reaction. I’m just doing what I can do based upon my experience and my one body, which is why representation on screen is so important because not one of us can tell the entire story. We can only tell our piece of it. But with films like this that do end up going international, a lot of the time smaller movies, you don’t know. Sometimes they do, sometimes they don’t. It means you get to have a really extensive conversation with movies like this and I’m so grateful that this film has so many pockets in it. If you want to just enjoy it, you totally can but there are a lot of aspects to it that I think are worth talking with your friends about, talking with your family about. So when you have a multi-cultural global conversation like that, I think it allows all of us, through the veil of metaphor of a film to be able to reveal some deeper truths and maybe empathize in a new way.