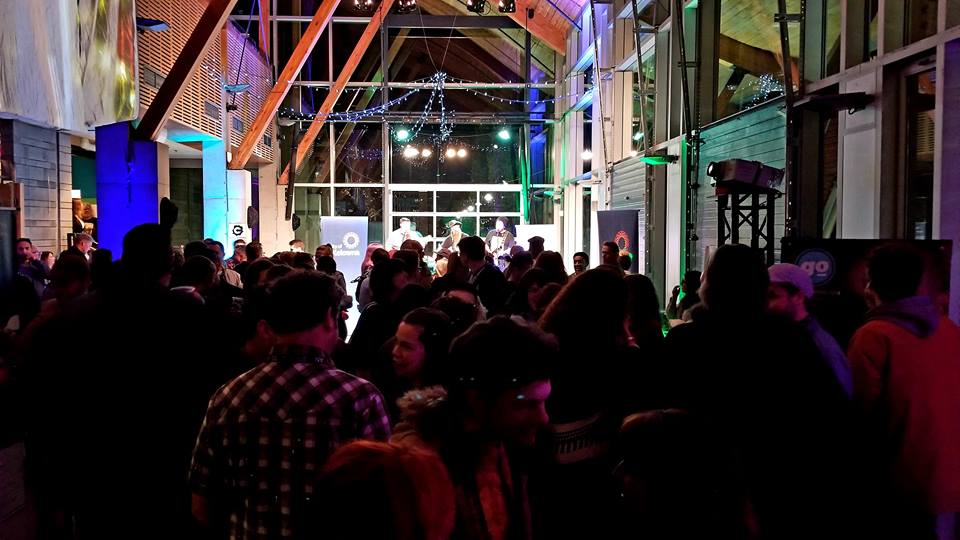 The room was oh so quiet, and the air was oh so still, until…. a hundred invite-only delegates from the BreakOut West 2018 Festival and Conference came together for last night’s VIP kickoff bash at the Rotary Centre for the Arts in Kelowna, BC.

“I believe this event is a culture generator, in and of itself,” said high profile guest Mayor Colin Basran. “Vibrant arts and culture take a good city and make it an AWESOME community.”

And boy oh boy is the BOW community tight knit and with it.

As the clock struck 7pm, the crowds started filling in the RCA’s spacious and decorated lobby and Dan Tait of BC’s folk duo Tiger Moon banged out the first tunes of an industry-packed open jam session.

A packed bar, a hanging projection display, and twinkling lights transformed the RCA’s sometimes stark and elderly lobby into a bumpin’ VIP kickoff party and precursor of what’s to come over the course of this weekend’s festival and conference.

“The energy here is so unique,” said Host Committee member and local hip hop artist Julian Wolansky, aka Immaculate. “This event creates energy that builds, all focused on music and infused with extra dose of creativity.”

A multitude of music industry presenters, venue owners, and festival organizers from across the country casually schmoozed with locals, guests, and musicians, while they munched on all you can sweet treats offered up for grabs on multi-tiered round tables scattered throughout the RCA’s atrium.

“Moments like these push the local community to come together, take part, and bare witness,” added Wolansky before diving in for a handful of mixed goodies.

The talent coalescing here in Kelowna over the next few days is unreal as the BOW Festival offers a stellar line-up of original hip hop, pop, and indie artists hailing from as far away as Australia and Wales.

But last night, it was just about getting comfortable, meeting new faces and hooking back up with old friends.

“I came out to see friends that I haven’t seen in a while,” said local touring artist Joshua Smith over a little glass of red wine stuffed in a miniature plastic cup.

I shared that as a touring artist one’s colleagues are also on the road, and sometimes conferences like these provide a moment to rest amongst the rubble of busy travelling seasons.

“I love your shirt,” I added, pointing to the well kept Weird Al Yankovic original, Smith was proudly sporting.

We both found ourselves drawn to another space, this one called the Listening Room, also known as the RCA’s Dance Studio with a makeover. There was a sandy version of beer pong, a half played game of monopoly, and a mock lounge-living room with couches, low tables, more munchies, and the ominous aquamarine glow of black lights.

It’s where I found singer/songwriter Scott Henderson of Souls In Rhythm contemplating why the UK looked so small compared to the rest of Europe, as depicted on the instruction image for a 1000+ piece puzzle up for solving by any old conference passerby.

“This conference, this festival, it’s for the ones who are isolated on the prairies, you know? The universe comes to us,” said Henderson, whilst the song writing workshop participants tried to figure out how to begin sorting the mound of tiny pieces.

Puzzle maker and one of 12 songwriting workshop participants Tatiana Zagorac of solo electro-pop act TallTale, shed light the flipside present in every event.

There’s always something to grapple with at conference events such as these, but in general the atmosphere was bubbly with excitement, readiness, and the reuniting of old business acquaintances.

“This is so good for the Okanagan because it’ll help blossoming art communities like Kelowna understand the value of art,” said delegate Julie Fowler, the artistic and executive director of ArtsWells’ Festival of All Things Art.

The BOW conference and festival is widely regarded as a “high quality, small festival with a well curated line-up of musicians,” said Henderson, before handing off the puzzle to others.

“When you bring all these industry people together, it cannot not encourage growth and interest,” added Fowler, sipping a cold brew while cozy warm in a fall coat, cheerful and smiling as always.

Make sure to grab the BreakOut West 2018 app or visit the website for schedule. Tickets available here.