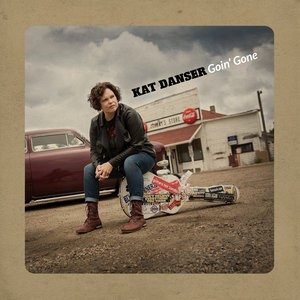 Edmonton’s Kat Danser is back with her 5th album, and you’re going to fall in love. Part blues, country and swamp, GG is like a tour through the U.S. south. Kat’s music is a steel belted radial easily flexing between a dusty gravel road and a fresh coat of asphalt.

True to her Gypsy/ Polish heritage, Kat Danser is in perpetual motion.  Yes she plays the blues- she also studies it (she now has a PHD in Music from The University of Alberta), lives it, breathes it, and elevates it from sweaty beer joints to centre stage in elegant concert halls.  Goin’ Gone is a collaboration between Kat and Juno Award winning producer Steve Dawson, whose latest disc I reviewed in this column not long ago. It’s a combination of the sounds, and imagery in Kat’s lyrics that make this, for me, a visual album… you can see the stories happening when you listen to the songs.

Goin’ Gone is a blues album but that seems a limiting description- there’s much more going on underneath. Dawson’s production is earthy and vivid so you don’t miss a thing, and some of the guitar is pretty twangy.  Danser has a great voice; the way she sings invites you into each song to wander around for a bit.  VERY cool record, this. 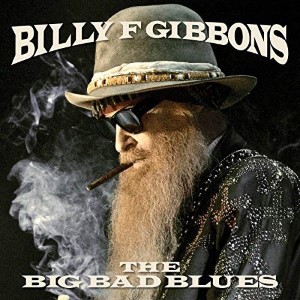 This is the 2nd solo album by the ZZ Top guitarist, following 2015’s Afro/ Cuban delight Perfectamundo.  A mix of sweet covers and savvy originals, The Big Bad Blues is everything you’d expect from Billy- the aural equivalent of a thick, juicy bbq’d steak.

In comparing the two albums on his website, Billy says “We successfully made our way through those uncharted waters with the Cubano flavor of Perfectamundo and completed the journey.  The shift back to the blues is a natural.  It’s something which our followers can enjoy with the satisfaction of experiencing the roots tradition and, at the same time, feel the richness of stretching the art form.”

You can be forgiven for thinking that this sounds like ZZ Top, because it does; Gibbons must be counting on folks to make that connection.  As I listen I wonder what Frank and Dusty think of Billy making this kind of music without them but to be fair, after nearly 50 years together the urge to play with other people must be a strong attraction.  There are no huge surprises here, just some fine playing from Billy Gibbons and The BFG’s. Nothing as spine tingling as Vincent Price Blues from ZZ’s Rhythmeen album, but the big, fat tones throughout this record are delicious.

KEY CUTS:  My Baby She Rocks, Bring It To Jerome, Rollin’ and Tumblin’ 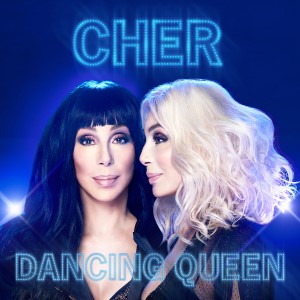 As if the title isn’t a dead giveaway, this is an album of Abba cover tunes.  Apparently, after taking part in the Mama Mia movie sequel, Cher thought this was the thing to do.  Well done, but if you already have Abba’s best of CD, is this necessary? Maybe not- but if you’re a fan of both you’re going to enjoy this.

“I’ve always liked Abba and saw the original Mama Mia musical on Broadway three times” Cher says.  “After filming Mama Mia, Here We Go Again, I was reminded of what great and timeless songs they wrote and started thinking ‘why not an album of their music?’ The songs were harder to sing than I expected but I’m so happy with how the music came out. I’m really excited for people to hear it- it’s the perfect time.”

Dancing Queen was recorded and produced in Los Angeles and London with Cher’s longtime collaborator Mark Taylor, who previously produced her amazing comeback record Believe.  Her vocals are strong and on target, and Taylor has modernized the arrangements without overly screwing with the original sound of the music we already know so well.  It’d be interesting to hear what Abba themselves think about this disc.

Dancing Queen certainly won’t conquer the world like Believe did but it’s a fun record; no doubt that was the whole point all along. 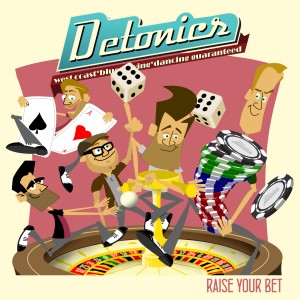 These guys are a blast!  Detonics may hail from The Netherlands but they play 50’s style west coast swing, blues ‘n’ boogie like they were born to it. With Raise Your Bets.  They haven’t reinvented the wheel but they do make this music extremely well, and they show you a good time playing like the fifties and looking like it too.  The bad news is, you gotta wait for Nov. 16th to get your hands on this!

These guys have been playing major international festivals & clubs and been recognized in competition too.  Detonics won the Dutch Blues Challenge in 2016, represented The Netherlands at the European Blues Challenge, and in 2017 they reached the semi finals of the International Blues Challenge in Memphis.  Raise Your Bet reminds me of early stuff by The Downchild Blues Band and maybe Powder Blues as they play with muscle and precision.  It’s funny- as I listen to the up-tempo stuff here, I picture the Charleston dance contest scene from “It’s A Wonderful Life”.

Of course they don’t go flat-out all the time; when they gear down for a rumba or slow blues, Detonics are evocative and impressive.  I daresay that on Raise Your Bets, they are damn near untouchable.  With bands like this, and Thorbjorn Risager & Black Tornado, the Dutch blues scene bears further and extensive investigation.

KEY CUTS:  Swing King, Butter Side Up, Bullet Through My Heart 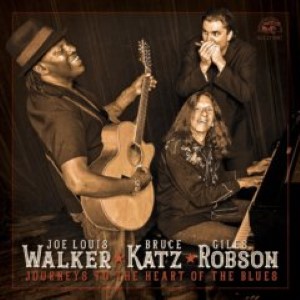 One of the most intimate, soulful blues albums you’ll ever come across.  Journeys Into The Heart Of The Blues captures three masters of their instruments digging for gold and coming back with an embarrassment of riches that every blues fan should hear.

The genesis of this record was when guitarist/singer Joe Louis Walker first met and jammed with harmonica ace Giles Robson at a festival in the Netherlands.  Robson began dreaming about recording an acoustic blues album with Walker, reached out to him, and with Katz onboard at Walker’s suggestion, here we are.  Journeys is a prime example of the dynamics, grooves, lyrics and feeling of pure, traditional blues.  Harp maestro Robson calls this disc “Blues played intimately and at a low volume and with the wonderful space that is created when drums and bass are taken out of the equation.”

Journeys To The Heart Of The Blues includes songs from blues masters like Sonny Boy Williamson, Blind Willie McTell, Smiley Lewis and more, plus a new original instrumental. “To be able to play deep, real blues with musicians like Joe and Giles was a truly soulful experience” Katz says. “Each song took us on a journey, both lyrically and musically, to the heart of blues music.”  No long showy solos or overdubs, just three guys gettin’ busy with some serious blues- a tremendous relief from these troubled times. 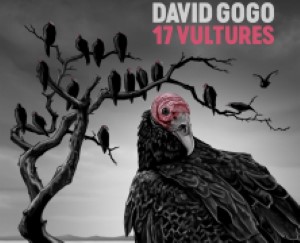 This is Gogo’s most diverse and rockin’-est record to date.  There’s plenty of blues to sink your teeth into and lots of greasy bump ‘n’ grind to spare. 17 Vultures is one of those discs that makes you glad to be alive.

17 Vultures features 5 David Gogo originals with frankly stunning covers of tunes by The Beatles, Barbeque Bob, Doug & The Slugs and Bob Dylan.  Gogo usually keeps his acoustic and electric stuff separate, but after listening to The Beatles’ “White Album”, he decided to accentuate both on the new disc. “In the past I was afraid that if I mixed my acoustic songs with my more rocking material it would confuse people” he says. “I don’t think I was giving (them) enough credit.  I was listening to The White Album recently and thought ‘well, the diversity shown on this collection doesn’t seem to hurt’!”

Backed by Pat Steward on drums (Bryan Adams, Odds, Colin James, Jimmy Barnes) and Ben Dwyer (son of jazz legend Phil Dwyer) on electric and upright bass, Gogo has fashioned an album of savage beauty.  The songs range from traditional blues to heavy contemporary influences; I think people will take to this disc perhaps moreso than his others.  I’ve enjoyed every David Gogo album I’ve heard but there’s something about 17 Vultures that just works.  It comes out Oct.19th, better grab one right away when it does.